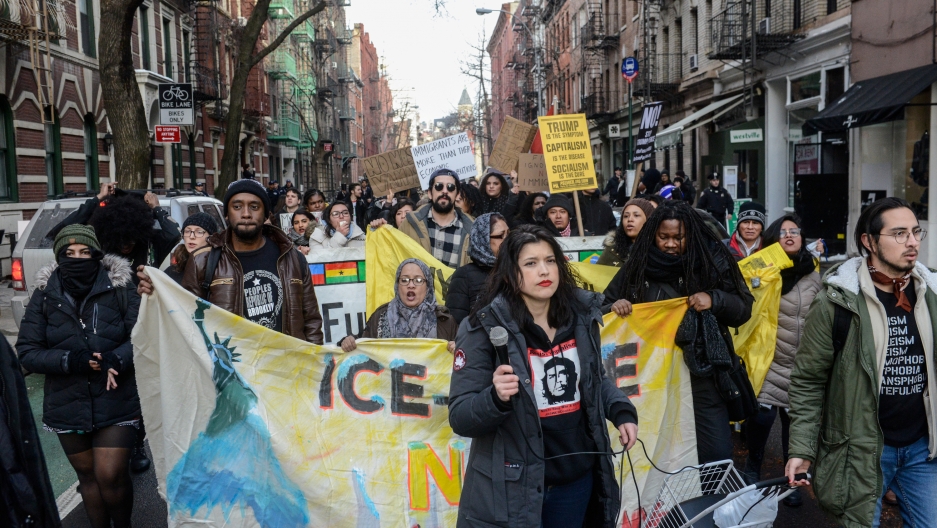 Dozens of public defenders gathered for an impromptu protest on Tuesday in Brooklyn, after federal agents conducted a courthouse arrest.

Genaro Rojas-Hernandez was charged earlier this month with assaulting his wife. He was waiting in the hallway of the Brooklyn courthouse for a hearing on Tuesday when he was apprehended by ICE agents. The agency is seeking to have him deported to his native Mexico.

WNYC’s Beth Fertig covered the incident and spoke with The World's Marco Werman about what she saw.

Beth Fertig: As soon as this happened, word spread like wildfire among all the public defenders in the building. They said, “ICE is here.” It went up on Twitter. […] And they marched outside and had this protest.

Marco Werman: So were immigration agents from ICE breaking policy by entering this courthouse?

No they were not. Courts or public buildings, anyone can enter them. And the Office of Court Administration says ICE followed its own procedures by notifying the court officers that they were [...] in the building. But the Legal Aid lawyers believe ICE took the client into some kind of restricted space behind the courtroom where it was hard [for lawyers] to talk to the man. And this is why the Immigrant Defense Project here in New York has been meeting with the state's top judge, urging her to make some rules about where ICE can and cannot go.

Why do you think this particular case caused so much outrage, because isn't Mr. Rojas Hernandez charged with domestic abuse?

Yeah he is. And an immigrant who is charged with a crime is considered deportable. And an undocumented immigrant is considered deportable. [And Rojas-Hernandez] fits both categories. But I think the outrage is just over the principle of having ICE in these courthouses. Because to the lawyers, [courthouses] are considered sensitive locations. They believe that it's going to have a chilling effect. In surveys, public defenders have said their clients have been more fearful about going to their court appearances because they fear ICE will pick them up, although we've asked court administration for data, and there's no hard data suggesting that people are not showing up to court appearances. But [...] even prosecutors are saying it's hard to get immigrants to cooperate, or harder than it used to be.

There seems to be pretty universal consensus among the bar in New York that this is just a bad idea. The Brooklyn District Attorney, Eric Gonzalez, said this week after this happened that [courthouse arrests] have an impact on due process [and] he doesn't want ICE in the courts. [But] it's a really tough thing to deal with because ICE says [...] it needs to pick people up in courts precisely because you have so-called sanctuary cities like New York where the local police and jails do not detain a person that ICE wants unless that person is charged or actually convicted of a serious crime. You know, every week ICE sends out publicity e-mails to reporters saying, "Look at all these people we had to pick up because sanctuary cities didn't hold them in their jails!" But as I said, there's a rising alarm about the effect that this can have. And in New York, the court administration has documented at least 40 cases of this happening in the city courts this year. [...] So this is not going away.