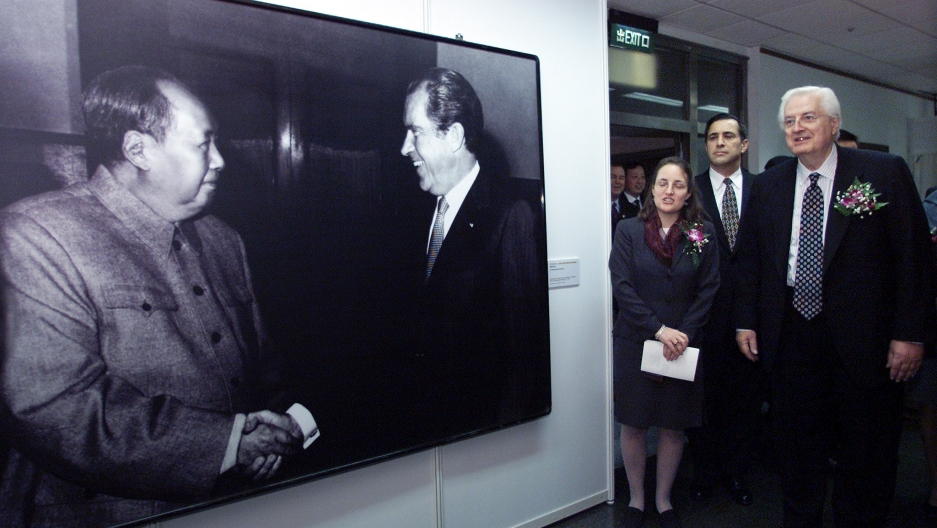 A 2002 exhibition in Shanghai called "Journeys to Peace and Cooperation" showcases the 30th anniversary of US President Richard Nixon's historic visit to China in 1972.

Tensions between the US and North Korea have spiked yet again.

Pyongyang has tested a new intercontinental ballistic missile that it claims can strike the US mainland. President Donald Trump has promised new sanctions in response.

So where do we go from here?

“I think what it would do is take away the biggest problem between the United States and North Korea and that's lack of trust,” says Stone Fish.

“Too much [of] the debate is focusing on North Korea's weapons capability as opposed to the way to get them to not see the United States as an existential threat.”

A summit between leaders who have exchanged fiery rhetoric might sound crazy, but it’s happened before — during the Cold War.

On July 15, 1971, Richard Nixon made the stunning announcement that he would be the first US president to visit Mao Zedong’s China. “There can be no stable and enduring peace without the participation of the People’s Republic of China,” Nixon said. The fact that Nixon had made battling communism a hallmark of his political career up to that point made the news all the more shocking. But the summit, which took place six months later, altered history. It upended the balance of power in Asia and laid the groundwork for decades of friendship — or at least begrudging respect — between China and the United States. And it guaranteed that China, the world’s only major Communist power besides the Soviet Union, would tilt closer to Washington than to Moscow.

Far from considering Nixon a political hypocrite or a pushover, Americans cheered his diplomatic coup. Nixon’s approval rating jumped from 49 percent in January 1972 to 56 percent after his return from China a month later. The trip, and the positive publicity it generated, allowed Nixon a brief respite before Watergate overwhelmed him.

You can listen to The World’s full interview with Stone Fish above, and click here to read his full article in New Republic.