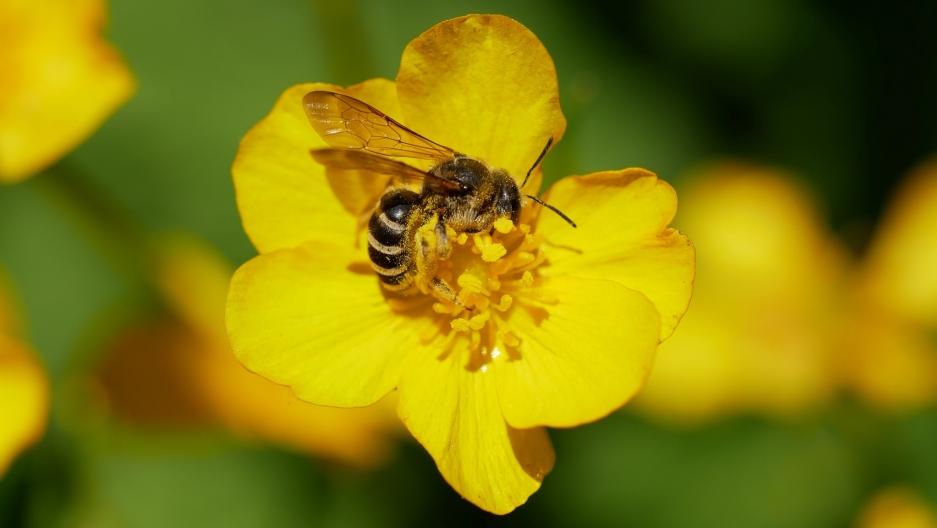 When you think of bees, your mind probably heads straight to the big, buzzing bumblebee, or the social honeybee flitting from flower to flower.

But there are thousands of other bees out there, too — some no larger than a grain of rice. And according to Shalene Jha, an associate professor of integrative biology at the University of Texas at Austin, these bees aren’t just important pollinators — they also have some curious quirks that you may not have heard about.

1. Most bees are solitary animals.

Most bees nest underground, Jha says, or live in rotting logs or the stems of trees. “About 90 percent of all bees are actually solitary,” she explains. “So despite kind of the public impression that all bees are like honeybees and bumblebees, we have a lot of these bees that are that are living on their own.”

“So, bee bread is this mixture of honey and pollen and some other secretions that solitary bees create for their offspring, for their babies,” Jha says. “And they create this little ball of resources and then they'll lay their eggs on top of this ball of food.”

Not only does the bee bread provide food for just-hatched solitary bees, but Jha adds that it also includes helpful fungus and bacteria. “And so bees provide this care for their offspring in the form of this bread.”

3. The “sweat bee” gets needed nutrients from us and other animals.

The sweat bee “got its nickname because humans noticed it drinking their own perspiration and also the fluids of other animals,” Jha says. (Check out butterflies and bees drinking caiman tears in National Geographic.)

“What we believe is going on is [the bees are] trying to get a limited resource,” she explains. “So things like sodium and other micronutrients can be limiting for these bees, and so they need to get them somewhere — and tears or sweat are often good places.”

“They often go back to their old nest sites and kind of refurbish the homes where they were born, so where their mothers actually laid them,” Jha says. “And so they have this high level — we believe — high level of fidelity to these woody materials in which they were born.”

5. Even tiny bees are big pollinators.

Jha and her colleagues recently conducted a “paternity analysis” of the trees in a roughly 2.5-square-mile plot of Panamanian forest.

“We looked at the DNA in a seed to figure out where pollen was coming from,” Jha explains. “And what this allowed us to do is create kind of a little roadmap of where pollinators had been traveling before they landed on a receptive flower.”

Among their findings, published in the Proceedings of the National Academy of Sciences, is that even the tiniest bees play a big role in pollination — and promoting genetic diversity in forests. The researchers discovered that small bees frequently managed to spread pollen between trees more than a mile apart.

“[That’s] a million times their body size in terms of distance,” Jha says. “To put it in human context, it would be like traveling from Chicago to LA based on just the energy that you produced.”