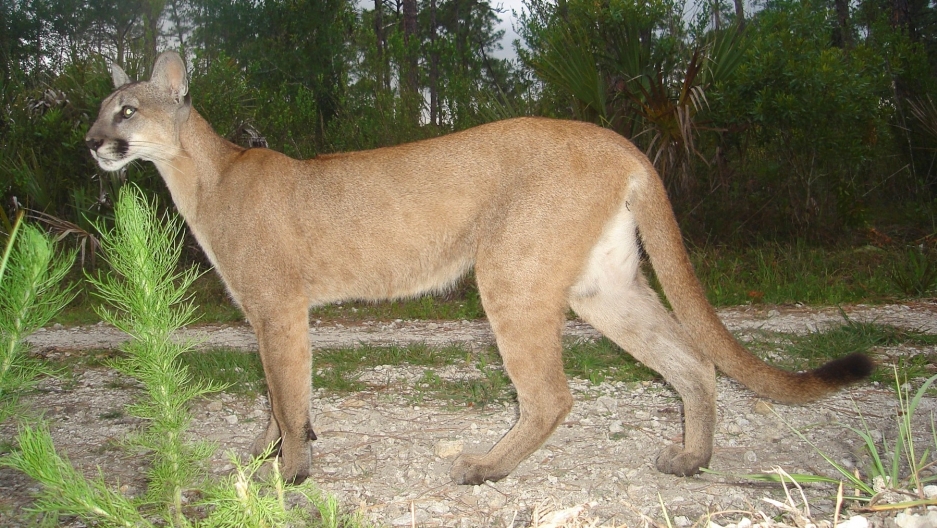 The Florida panther may be an icon of the state and its sports teams, but in real life, the big, lanky cat has long been endangered. There may be as few as 120 panthers left in the wild, according to the Florida Fish and Wildlife Conservation Commission — but even that low number is better than in the past.

“When the first endangered species list came out, there were some state officials that were convinced it was all moot because they thought [panthers] were extinct already,” says Craig Pittman, a staff writer at the Tampa Bay Times. As Pittman recently outlined for the Times, rediscovering the elusive cats was a story in itself.

After President Richard Nixon signed the Endangered Species Act into law in 1973, the World Wildlife Fund hired a Texan tracker named Roy McBride to come to Florida, Pittman says. McBride’s job was to figure out whether panthers — which once roamed widely across Florida’s wilderness — still existed.

“And Roy managed to track one down, this sort of spindly old female, to prove that panthers still existed,” Pittman says, “and he found panther signs through the rest of the landscape.”

In 1981, Chris Belden, the state biologist in charge of Florida’s panther program, got “very reluctant permission” to go out with McBride and his dogs, Pittman explains. Their goal was to “track down a couple of panthers and put radio collars on them so they could find out where the panthers go, where they like to live, that kind of thing.”

But during that trip, the tracking party treed a panther and shot a tranquilizer dart up into the branches to knock the cat out. The only problem? The panther didn’t leave the tree.

“So Belden actually had to climb the tree to try to bring the panther down, and they both fell out of the tree at the same time,” Pittman says.

Despite the early hiccup, the panther-tracking program has continued to this day. But now, Pittman explains in his article, the era of collaring panthers may be winding to a close. For one, federal budget cuts have affected capture programs. But technology has also advanced beyond tranquilizer darts and tracking collars.

“Now they have better ways — for instance, trap cameras where the cameras are put out in places where they know the panthers are, and they are motion sensitive, so when a panther passes by, they get pictures of it,” he says. “That was the way they found out that they had finally had a female panther cross over the Caloosahatchee River and show up more in the Central Florida area for the first time.”

The downside of such techniques? They don’t yield as much information about panther health.

“One biologist I talked to, a woman named Deborah Jansen — who was along on that 1981 trip and has been studying with panthers ever since for the National Park Service in Big Cypress — she contends that there's still a value to continuing to do these capturing and collar things,” Pittman adds, “because you examine the panthers, you learn about their medical condition, if there's a potential for an epidemic. They almost had an epidemic of feline leukemia at one point.”

But when it comes down to it, collaring is stressful for panthers, Darrell Land told Pittman. Land is the panther team leader for the Florida Fish and Wildlife Conservation Commission.

“And he gave me this great quote,” Pittman says. “He said, ‘They would probably prefer not to be chased up a tree by dogs, shot in the butt, go into a drug-induced coma, fall out of a tree and wake up with bling.’"