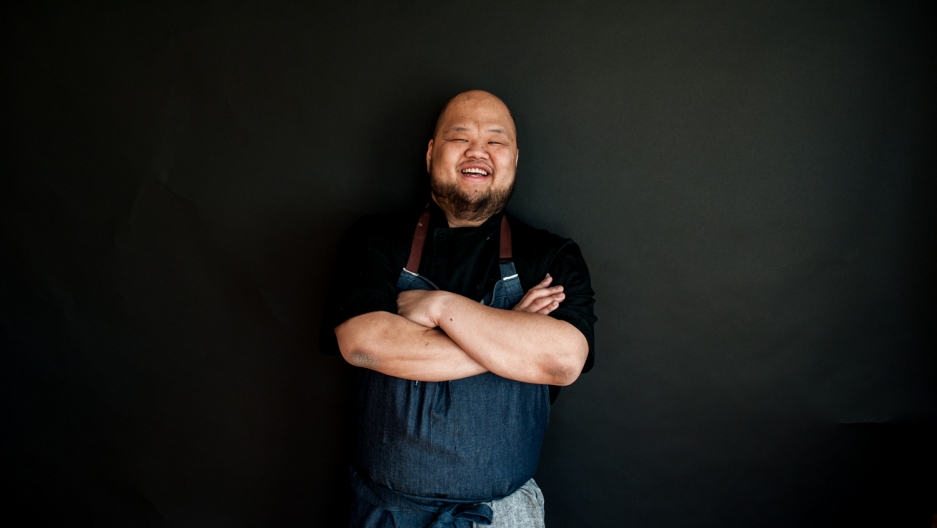 Growing up in the US, Chef Yia Vang's parents kept him close to Hmong traditions. He says that while other kids played Little League, Vang’s dad taught him how to butcher a pig and grill meat over an open flame.

It’s a rainy and miserable afternoon and, for the last few hours, Chef Yia Vang has been cooking under a flimsy white tent. But he’s not complaining.

“We don’t have much to complain about," he said. "Our parents had to cross the Mekong River to get here. A little rain never really hurt anybody.”

Vang is Hmong and was born in a refugee camp in Thailand. He came to the United States when he was about 5. Now, he's 33 and co-owns a catering and pop-up business called Union Kitchen, which specializes in Hmong cuisine. We met at a farm run by the Hmong American Farmers Association, where Vang prepped a dinner of sticky rice, roasted vegetables, and grilled meats for a mostly Hmong crowd, including elders and younger people.

Vang wants to share stories about the Hmong people through food. The Hmong have never had their own country and lived for generations as nomadic farmers in Southeast Asia and China. But Vang has spent most of his life in the Midwest, so eating cheese curds is part of his Hmong story, too.

As a chef, Vang says he’s struggled to prove himself to some Hmong elders, who, by his account are skeptical of his take on traditional food.

A pair of older Hmong farmers watched as Vang cooked whole chickens over a wood fired grill. Soon they started asking him questions in Hmong. After they left, Vang and his business partner, Chris Her, explained that the elders were critical of their grilling technique and wondered whether the food would be done on time. Vang and Her both said they’ve come to expect these kinds of comments from Hmong elders.

“If we were at a Hmong party it would be all of our aunts telling us how to cook!” says Her.

Growing up, Vang’s parents didn’t speak English and held strong to Hmong traditions, including food. So while other kids played Little League, Vang’s dad taught him how to butcher a pig and grill meat over an open flame. He remembers the first time his dad handed him a pair of grilling tongs. It was a major rite of passage. 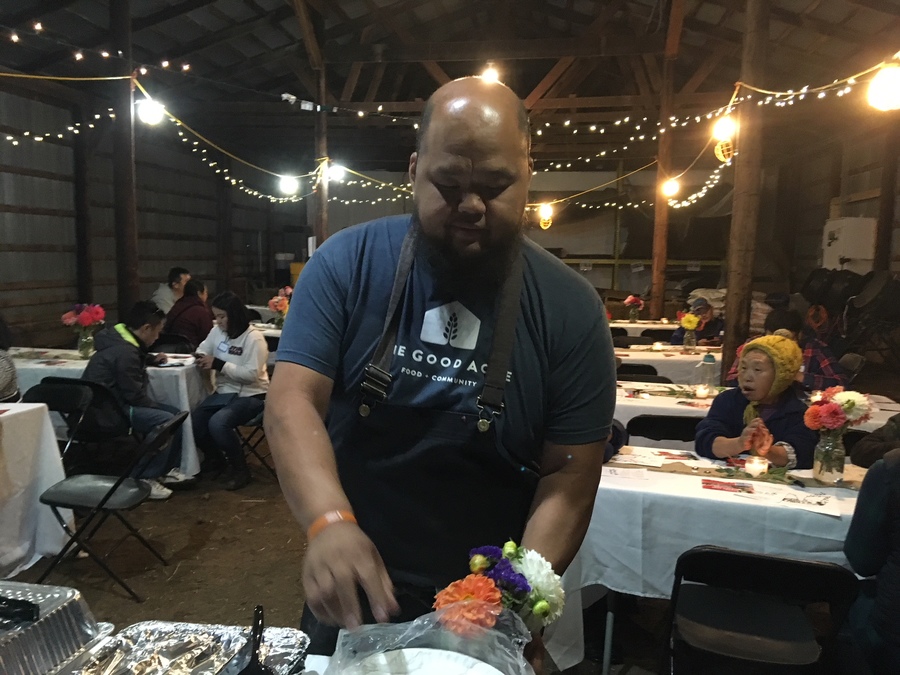 Chef Yia Vang preps a dinner for the Hmong American Farmers Association, held at a farm in Hastings, Minnesota. Growing up, his learned family traditions, such as how to butcher a pig and grill meat over an open flame. When his dad handed him the tongs, Vang remembers thinking, "OK, don't mess it up."

Later, Vang worked at restaurants all around the Twin Cities, including one nominated for a James Beard Award. Vang is now putting his own own stamp on Hmong cuisine by incorporating new techniques and ingredients. For tonight’s meal, he’s sauteing roasted beets. Even though many of the farmers here grow beets, Vang said Hmong people usually don’t eat them.

“We get a lot of our own people who criticize and say that's not Hmong food. Why would you use beets? Hmong people don’t use beets. And I would challenge them. When our parents and grandparents lived in Laos and Thailand, they used what was around them. Because it was about survival. And us being here in the Upper Midwest, wouldn’t we do the same thing?”

By nightfall, a hungry crowd had gathered inside a barn. People piled heaps of food onto paper plates. Vang watched with anticipation to see if the elders would try his roasted beet dish. Before long, the food was gone. Some of the farmers returned to the fields wearing bright headlamps. Vang stayed behind to talk with a friend about his signature hot sauce, which he’s branded Tiger Bite.

It turns out that Tiger Bite has a particular meaning for Hmong people.

“The literal translation for tiger bite is the worst curse you can give somebody,” explained Vang. "It's a bad word.” Vang hasn’t mustered the heart to tell his parents.

Vang has plans to sell his Tiger Bite sauce. He also wants to open his own restaurant. Just like his nomadic Hmong ancestors, he’s looking for a permanent place to call home.