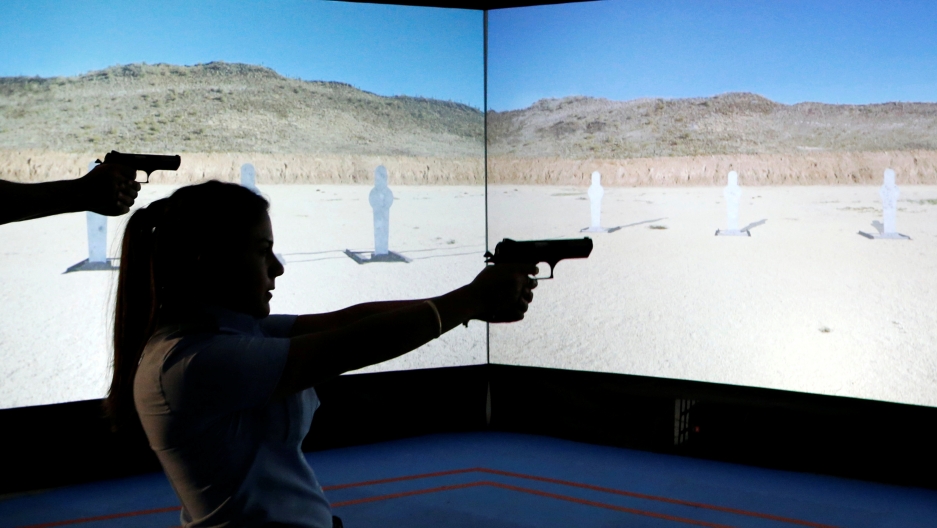 An Arab Israeli police recruit takes aim with her gun towards a screen displaying targets during a training exercise at the Israeli police academy center in Beit Shemesh.

When the topic of stronger gun control resurfaces in the US, often in the wake of a mass shooting, pro-gun activists and politicians frequently cite Israel as a counterexample.

There are a lot of guns in Israel, the argument goes, but it has less gun violence — so the problem in America is not guns, but something else.

That’s not quite accurate — Israel actually has strict gun restrictions and low rates of gun ownership.

It’s true that visitors are often surprised by the number of firearms they see in public spaces, says reporter Ben Hartman. “But on the other hand, every single one of those firearms is accounted for, and there’s a reason that the person has it.”

To own a gun in Israel, an individual must be over 21, have lived in the country for more than three years, and pass background checks as well as mental, physical and shooting exams.

“Before running through all those hoops,” Hartman adds, “you have to show that you work in security or law enforcement, or that you live in what they call ‘national priority areas.'”

It’s not just gun laws that make Israel so different from the US — it’s a culture, a mindset.

Hartman was born and raised in Texas and has lived in Tel Aviv for over a decade. He says that in America, owning a gun is a right, but in Israel, it’s a privilege you have to earn.

He attributes that to the high stakes Israel faces when it comes to national security and its universal draft.

“In Israel, you don't have that same sort of gun fetish and recreational obsession with guns [that you do in the US], Hartman says. “Israelis, when they encounter firearms for the first time on a personal level, it's in the military when they're 18 years old and they're drafted. And a firearm, to them, the association is with the military, and with security, and a burden.”