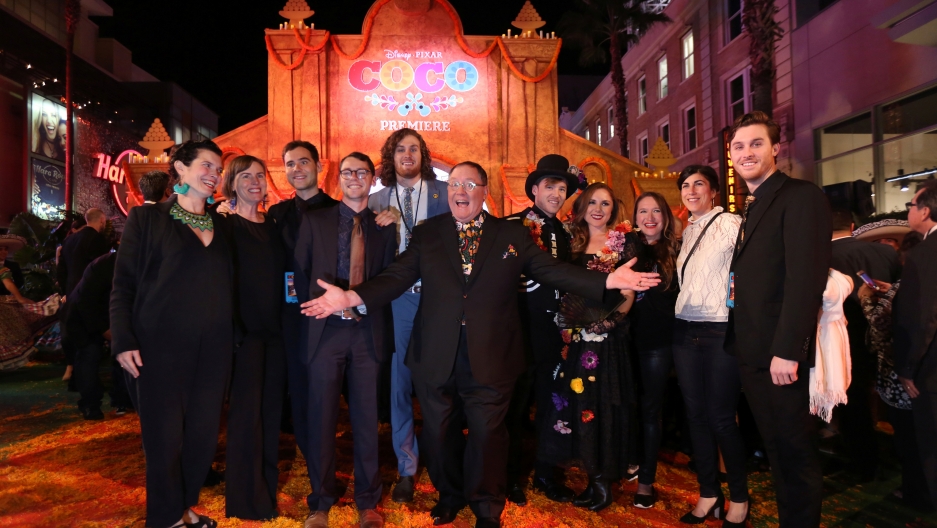 Editor's note: "Coco" won the 2018 Oscar for best animated feature as well as best song for the piece "Remember Me." Listen to our interview with the movie's cultural consultant, Lalo Alcaraz, the morning after the awards ceremony.

In the era of Donald Trump, it doesn’t take much to see political undertones in just about everything. Including the new Disney-Pixar film, "Coco."

Built around the Mexican holiday, Día de los Muertos, or Day of the Dead, the movie is about Miguel, a 12-year-old boy from rural Mexico who dreams of becoming a guitarist. In Miguel’s pursuit, he crosses over into the Land of the Dead, where he interacts with his ancestors, famous musicians and magical creatures.

"Coco" has been an instant hit since opening in Mexico on Oct. 27. It has raked in more than $43 million — the highest-grossing movie of all time in Mexico. The film opens in the US on Nov. 22.

It hasn’t hurt that many people in Mexico see the movie as a subtle rebuke of President Trump and his anti-Mexican rhetoric.

“The movie is a perfect example of soft power,” says Alejandro Legorreta González, president of the investment firm, Sabino Capital, and a columnist for the Mexican newspaper, Reforma. “The currency of soft power is culture. When people watch the movie, they will see that Mexico is not full of crime and gangsters as some government people have been saying.”

Legorreta thinks the movie could even help Mexico in the heated negotiations over the North American Free Trade Agreement — which Mexico is desperately trying to salvage over Trump’s repeated threats to pull out. The latest round of negotiations begins this week in Mexico City.

When "Coco’s" directors Lee Unkrich and Adrian Molina began making "Coco" six years ago, the notion that Trump would become president was laughable. But Trump now looms large over the film, as does the strained relationship between Mexico and the United States.

Molina said the filmmakers’ goal was always to show the beauty of Mexican family, traditions and culture. “In developing the story, our intentions remain exactly the same. The timing and the world has changed from beneath us,” Molina said. “What people make of [the film] now I leave to them.”

While "Coco" is now being praised for its accurate depiction of Mexico, Disney committed a major cultural faux pas with Mexicans when, in 2013, it applied to trademark the term “Día de los Muertos” for marketing purposes.

The backlash was swift and harsh. Mexican American cartoonist Lalo Alcaraz tweeted: "On the offensiveness scale, it seems awful and crass, as the words, 'Día de los Muertos,' aren't just some brand name, but a holiday."

Molina said the filmmakers immediately realized they had made a mistake. “When that happened it was like you could feel every single heart breaking in the room. It was unfortunate and accidental, and we have apologized for it. The community rightfully spoke up about it because it was never our intention and not something that ever should have happened.”

Following the outcry, Disney announced it was withdrawing its trademark request and had changed the name of the movie to "Coco," the name of Miguel’s great-grandmother and the family matriarch. It also hired a group of cultural consultants — including Alcaraz.

Their efforts have paid off.

The filmmakers enlisted Elena Poniatowska, the uncontested doyenne of journalism in Mexico, to voice the character of Coco in the Spanish version of the movie. Mexican superstar, Gael García Bernal, is the voice of one of the main characters in the English version.

Still, not everyone loves the film. Michael Mariaud, 29, says it captures the sentimental aspect of Day of the Dead, but fails to account for the sarcasm also imbued in the holiday.

“It’s about remembering the dead and making fun of death,” says Mariaud, the founder of a Spanish-language institute in Mexico City. “Because death is something inevitable, we laugh about it so it doesn’t weigh us down.”

And, Mariaud says, the film caters to nostalgia for a Mexico of the 1940s — one where people lived in rural towns, had big families and listened to ranchera music.

“It’s as if you had a movie and the aesthetic was of the United States in the '50s,” Mariuad says. “It’s Disney. It has a strategy of telling stories about the world that are digestible to an American audience.”

By contrast, Molina said he imagined the film taking place in modern-day Mexico, in a rural town. He said the lack of cellphones and other technology in the film was an attempt to give it a timeless quality.

But judging by ticket sales, most Mexicans who have seen the film love it.

Josefina Acosta Perez went to the movie with her son to celebrate her 60th birthday. “It’s excellent,” Perez said. “It elevates the family, and reminds us to value our culture because sometimes we forget.”