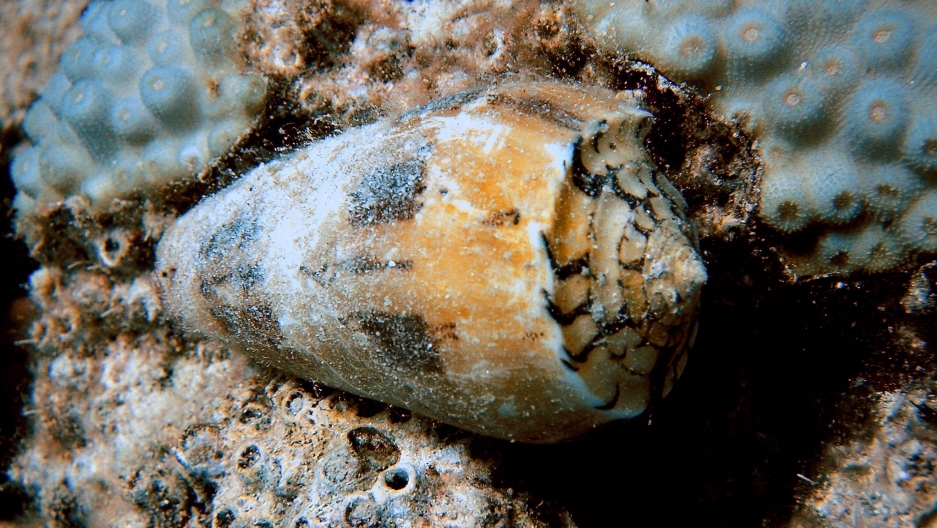 A cone snail is pictured here.

Nestled inside its bright, patterned shell, the cone snail cuts a familiar figure in tropical waters — you may have even collected its shell on a walk along the beach. But watch your touch — every species of cone snail is venomous, and some, like Conus geographus, can even kill humans.

But cone snail venom doesn’t deter Mandë Holford, an associate professor of chemistry and biochemistry at Hunter College and a research associate at the American Museum of Natural History. She uses salad tongs and scuba gloves to collect cone snails, and back in her lab, she studies their venom for compounds that offer novel treatments for everything from cancer to chronic pain. Her work is detailed in Science Friday’s latest video from its “Breakthrough: Portraits of Women in Science” series.

Holford explains that cone snails use their venom to hunt, harpooning nearby fish and worms with the tip of their tonguelike proboscis and paralyzing them with the powerful toxin. Then, the snails swallow their prey whole.

“What the venom is doing, it’s shutting down the physiological function of the fish,” she says. “So, it’s not dead, but it’s paralyzed — it’s going into what we call [excitotoxic] shock, and then it gets swallowed whole. It’s like the worst death you could imagine.”

But, as she explains, the same qualities that make the venom so horrifying for snail prey also make it an excellent candidate for human pharmaceuticals.

“The venom itself is very potent, it acts very fast, and it’s very specific,” Holford says. “So, those are all the ingredients you look for when you’re making a drug.” The venom is also made up of a number of components, she adds. “There are these peptides and proteins, which are very specific for hitting certain targets in the physiological system of their prey, and also the physiological system of humans. And that’s why they’re such good drugs because they can be very specific for specific targets.”

One painkiller derived from snail venom, called ziconotide, is already on the market to treat chronic pain. According to Holford, the drug, known commercially as Prialt, is 1,000 times more potent than morphine.

“And more importantly, it doesn’t cause addiction, right, because it doesn’t work on the opioid receptor,” she adds. “It works on ion channels, so these are sort of like gates on your cells.”

With chronic pain, neurons are constantly sending signals to one another through these channels, she explains in the film. But ziconotide can block those channels, cutting off the flow of pain signals. Currently, however, the painkiller still has one serious drawback — it has to be delivered via spinal tap.

“So, the big thing about ziconotide is it doesn’t cross the blood-brain barrier,” Holford says, “and that’s why you need to have the spinal tap, so it’s delivered directly into your central nervous system.” Her team is working on a better solution.

“So, what we’re trying to do is make this sort of Trojan horse nanocontainer to shuttle the peptide across the blood-brain barrier and get it to where it needs to go,” she explains. (Read more about Holford’s work on the nanocontainer at WBUR.)

What’s more, the channel-blocking peptides in snail venom could also offer promising treatments for cancer, Holford says. Her team has isolated one peptide, called TV1, that seems to work against liver tumor cells.

As Holford explains in the video, her team is now trying to understand which channel in liver tumor cells is affected by TV1. But don’t expect the killer venom discoveries to end there.

“What we’re trying to do is learn from how the snails are giving us new drugs, but also giving us new pathways and new models for looking at diseases and disorders, particularly around pain and cancer,” she says in the film. “Snails are really fascinating because it’s always, you know, the little package, big surprise.”