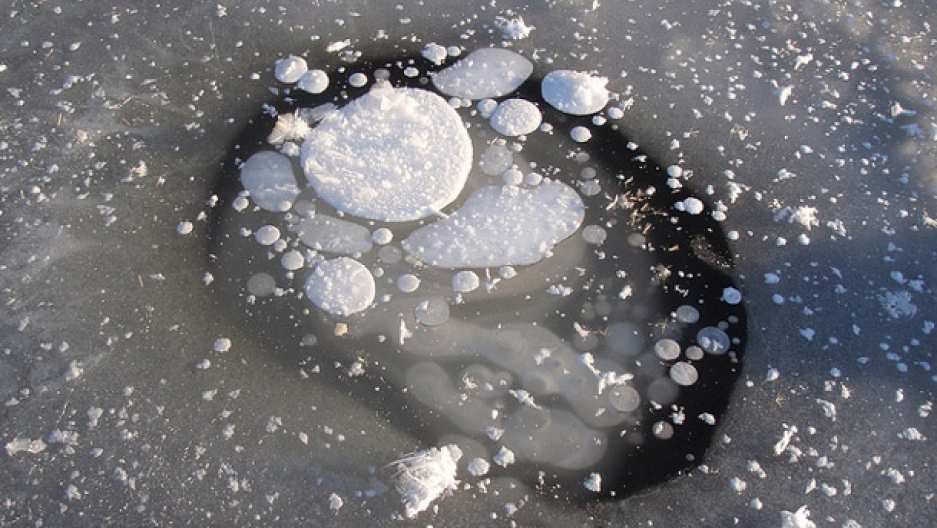 Methane bubbles are frozen in lake ice in Alaska. As the Arctic thaws, permafrost on land and continental shelves in shallow waters are releasing methane into the atmosphere at an increasing rate.

The title of a new book says it all — "A Farewell to Ice: A Report from the Arctic."

The book, by Peter Wadhams, head of the Polar Ocean Physics Group at the University of Cambridge, is the result of nearly a half-century of personal ice research, mostly in the Arctic.

“The Arctic is changing from being a permanent ice cover to becoming a seasonal one,” Wadham explains, “and that will cause big changes to ocean currents, to circulation of the atmosphere, to fisheries and especially to the air temperature, which will warm up because there isn't any ice cooling the surface anymore. That will have an effect, for instance, on air currents over Greenland, which will increase the melt rate of the Greenland ice sheet.”

Year by year, Arctic sea ice cover is dwindling, driven towards seasonal extinction by global warming — and the vanishing ice is having profound effects on the rest of the world. The rapid rise in atmospheric CO2 levels is the main reason for the accelerating melt of sea ice, but the melting ice itself is causing the release of another greenhouse gas, methane, that could be even more damaging.

“Methane gets released from shallow waters in the Arctic, where, underneath the shallow Arctic continental shelves, there’s frozen ground, called permafrost, left over from the last ice age,” Wadhams explains. “That permafrost acts as a cap over lots of methane contained in the sediments. That cap is being removed as the permafrost melts, and the methane is being released.”

In the short-term, methane is a more powerful greenhouse gas than carbon dioxide, and the fear, Wadhams says, is that the Arctic permafrost will melt in “one rapid go.” Should this happen, “the amount of methane that comes out will be a huge pulse, and that would have a detectable climate change, maybe 0.6 of a degree. … So, it would be just a big jerk to the global climate.”

The strongest effect on accelerating Arctic warming is something called the albedo feedback. Ice reflects about 80 percent of the radiation from the sun back into space. Dark water and dark tundra reflect only 10 percent of that radiation. The result is a huge amount of energy absorbed by the Earth’s or the ocean’s surface, which increases the overall rate of warming.

The polar ice cap also acts as a kind of “global air-conditioning system” that stabilizes temperatures — and that effect, too, is being lost.

“As long as there was still ice there to be melted, it kept the temperature of the atmosphere and the temperature of the ocean at about zero degrees Celsius [32 degrees Fahrenheit],” Wadham explains. “That prevented warm air from wafting over Greenland, which it’s now free to do, and it prevented warm water from melting the subsea permafrost, which it is now doing. So, it was performing two very useful functions, both of which have now stopped.”

While he paints a dire picture of Earth’s future, Wadham also proposes bold, and, he believes, realistic technological solutions. Humanity must find geoengineering solutions, he insists, because “we can't depend on people's virtues for the solution of abstaining from emitting carbon dioxide.”

“We can save ourselves without becoming more virtuous,” Wadhams believes, “because, if we can find a way to get rid of CO2 in the atmosphere, then people who want to drive Ferraris and SUVs around and so on can keep on doing so, up to a point. You're not going to forcibly abolish fossil fuels. We can combine it with still keeping some of our old habits, which means it's more likely to happen.”

Wadhams describes two technological solutions he believes could work. One is called marine cloud brightening. In this scenario, a drone ship with very tall masts injects a carefully calculated size of tiny seawater droplets into the bottoms of clouds. This brightens the clouds and increases albedo (that is, the reflective capability of the clouds’ surface), which could help hold back global warming.

The advantage of this system, Wadhams says, is that its effects end as soon the application process stops, so any accidental bad effect on some part of the world will be limited. With other methods, like releasing aerosols into the stratosphere, the effects don’t stop until they fall out of the stratosphere.

Marine cloud brightening is not a solution, “it's a sticking plaster,” Wadhams maintains. “The [real technological] solution is to take carbon dioxide out of the atmosphere. I think we have to do that if we're going to save the world in the long term.”