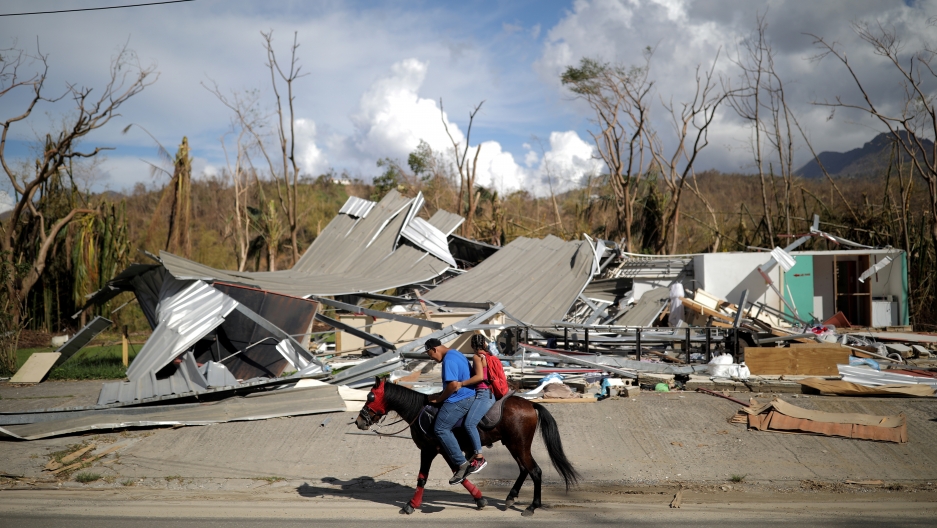 As the 60-day mark since Hurricane Maria destroyed infrastructure and buildings in Puerto Rico approaches, there's a mix of hope and dread about economic recovery for businesses on the island. Business owners have to cope with the loss of revenue, employees, customers and power.

The story of recovery after Hurricane Maria is mixed. While the local government touted that power output had reached 50 percent of capacity, distribution is another story.

In mountain towns like Naranjito, electric service is just being restored and water service is still out. Even the capital of San Juan still has huge patches of darkness. The restoration of electric service to the island is a primary concern. The local power authority and the federal government have tussled for control of the recovery purse strings. As local and federal officials continue their finger pointing, citizens are trying to cope.

The office of small and medium businesses, PyMES, estimated that more than 5,000 businesses will cease to operate due to the infrastructure collapse after the storm.

Power generators have become the essential element for economic survival. The businesses who had them before the storms, or were able to obtain one after, have survived or even thrived. However, the cost of generators and gas to fuel them are a new economic burden for business owners.

Small business owners like Aixa Tort try to manage. She's had several employees at her physical therapy clinic leave — some to work for FEMA — and cannot bill insurance providers until she recovers access to the internet and the medical records.

The destruction and looting of businesses left small business owners in a bind. The McLeary Mini Mart in Ocean Park is open, but still recovering. Revenue has dropped 80 percent.

"Everyday is difficult. Getting a plumber, an electrician, materials," laments owner Carlos Sánchez. "I was the only one in this corner who was not looted" and that includes a yoga shop which has no inventory.

Some institutions have come to the aid of business owners. FEMA and the Army Corps of Engineers are in the lead in rebuilding essential infrastructure. But individuals, foundations, and companies have also mobilized. The Foundation for Puerto Rico, set up by medical entrepreneur Jon Borschow, originally focused on tourism infrastructure. Now, foundation offices provide meeting spaces, internet and more to NGOs, farmers, small businessmen and others with infrastructure issues. Also, it is providing $3,000 grants to businesses trying to get back on their feet, after they have power.

Retail businesses in the Calle Loíza sector were able to reopen with the grant. Duracell, for example, has trucks delivering batteries daily to different towns.

Walid Garga was in line to receive FEMA aid for his bed and breakfast in Condado, which lost its four employees. He formerly worked in recovery for the UN, and feels that progress in Puerto Rico is painfully slow.

"I've worked in that field so I know how we could have done much, much better in Puerto Rico," he said. When asked if he was still optimistic, he responded: "Why wouldn't you live in Puerto Rico. ... It's the best place on Earth."

Long term, Garga still bets on the island. "I love this place. The people are nice; the weather is awesome."