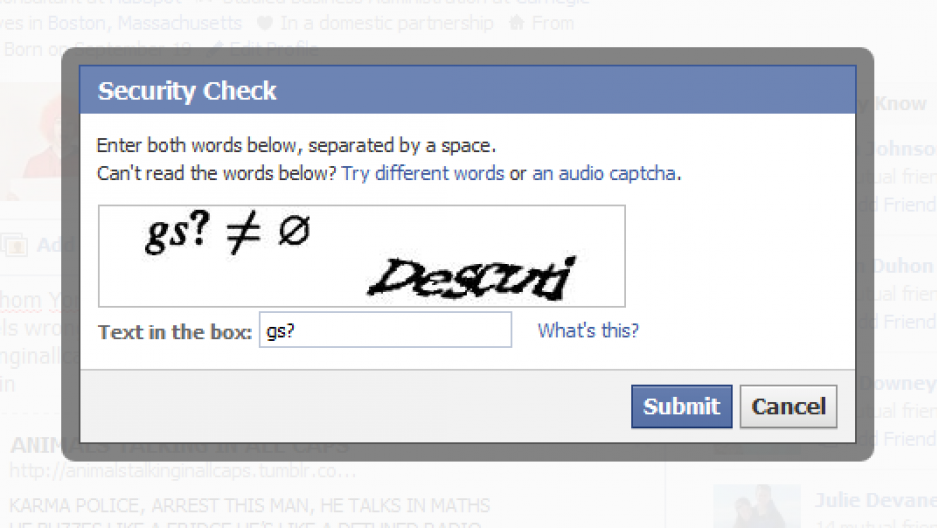 CAPTCHAs have long been the Web’s gatekeepers between humans and robots. A new AI technique can crack them.

CAPTCHAs — think those little forms with jumbles of letters and numbers — have long been the Web’s gatekeepers between humans and robots. Short for “Completely Automated Public Turing test to tell Computers and Humans Apart,” the tests are meant to be too complex for computers to solve.

But researchers writing in the journal Science describe how an artificial intelligence technique now can easily crack traditional text-based CAPTCHA tests. Called the Recursive Cortical Network, the AI solves reCAPTCHAs with 67 percent accuracy, while wriggling through others like Yahoo and PayPal CAPTCHAs with around 57 percent accuracy.

As co-author Scott Phoenix explains, the team actually developed the technique several years ago but waited to publish it until tech companies could update their CAPTCHA technology. (You may have noticed some CAPTCHAs using image sorting, a box to click, or even your website interactions to prove you’re not a bot, rather than the familiar mess of numbers and letters.)

“Those tests I think are a lot more friendly to humans anyway than entering all these squiggly letters,” says Phoenix, who co-founded California-based AI company Vicarious. “And by giving the outside community some time to update their systems, we made it a lot safer for us to publish our research.”

But for Phoenix, the real excitement here doesn’t end at having to decipher fewer squiggly characters. “I also think in the process, we've learned a little bit more about how the human vision system works and how we reason visually,” he says.

Traditional AI techniques might be trained to recognize alphabet letters through exposure to a huge number of sample images. In contrast, Vicarious co-founder Dileep George tells NPR the Recursive Cortical Network can be trained to build its own internal models of the characters. “And then, when a new image comes in ... it tries to explain that new image, trying to explain all the pixels of that new image in terms of the characters it has seen before,” George says.

This type of training not only makes the Recursive Cortical Network very efficient at CAPTCHA-cracking, but according to Phoenix, it’s also closer than other AI systems to the way our own brain works.

At Vicarious, researchers are using the Recursive Cortical Network to power robots that can solve problems visually, and even manipulate objects, Phoenix says, adding, “I think the future of AI is all about robots, actually.”

“I mean, we live in bizarroland right now, where all the ingredients that go in a robot — the motors, the plastics, the sensors, the electricity — are all really affordable, and nobody owns any robots,” he says. “And that's an AI problem; I think once we can make intelligences that can control robots the way we control our own bodies, we'll see a lot more robots and they'll be a lot more affordable.”

As for the new generation of CAPTCHA technology, Phoenix thinks someday, AI will crack that, too. “In the long arc of history, artificial intelligence eventually is able to do all the things that humans are currently able to do,” he says.

“And so yeah, I think there will be this ever-increasing set of tasks that AI can do and these ever-rising level of tasks and challenges that we give our robot or computer companions to attempt for us.”