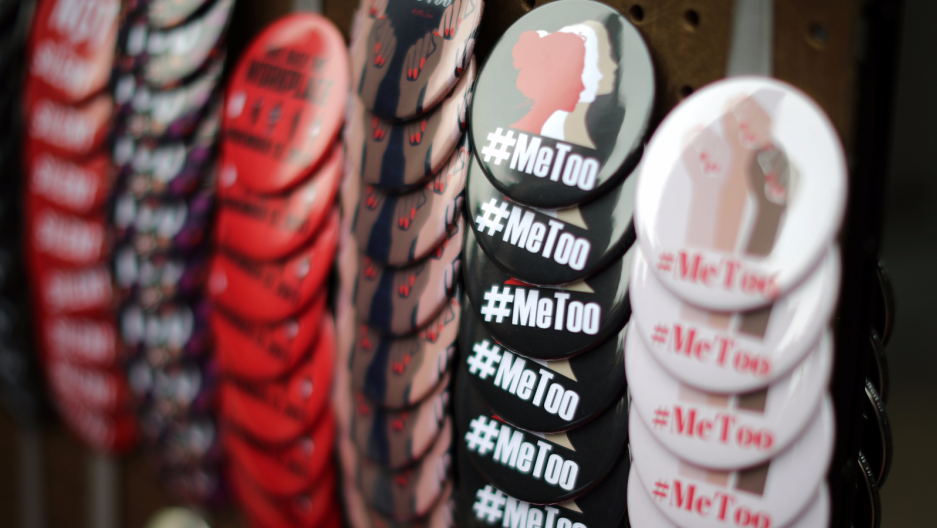 That was the advice a colleague gave to Alexandria Chang about 13 years ago. At the time, Chang was in her mid-20s and was a preschool teacher at a private school outside of Boston. She says that a father of one of the children in the school had made a sexually explicit remark to her.

“That comment really bothered me, but I didn’t tell my supervisor,” she says. “I was about 10 years younger than this parent, this was my first place of employment out of Teachers College, and I was a Canadian living in the States, so I felt lucky to even have a job and a visa.”

Though she confided in her co-workers, “neither suggested I should let anyone in the school administration know,” she says.

That advice is not surprising. Reporting workplace sexual harassment can be an agonizing choice for many people, especially women.

According to a recent Takeaway-Harris poll, more and more people (62 percent) say they feel comfortable speaking out and challenging their abusers. But when digging into those numbers, a different story unfolds.

Of the women who did say they were comfortable speaking out, just 22 percent said they feel that way because they believe their company would listen and be supportive. In other words, many people don’t feel like their company, their employer or the HR department has their back when it comes to harassment or assault.

If you were a victim of sexual harassment or assault, would the recent outpouring of accusations make you feel more or less comfortable about speaking out and challenging your abuser?

"The workplace should’ve been the first line of defense, but it’s not,” says John Gerzema, the CEO of The Harris Poll. “I think that’s really interesting. That, in essence, there’s this sort of a failure of the workplace, of corporate America, to confront and deal with these issues, whether it’s in Hollywood or somewhere else.”

According to the poll, which surveyed 2,138 adults over the age of 18 between Nov. 2 and 6, about 64 percent of people believe that cultural attitudes are changing. And that could partly be attributed to younger generations.

For what reason would the recent outpouring of accusations make you feel more comfortable about speaking out if you were a victim? Please select all that apply.

She continues: “Baby Boomers and Gen-X worked very hard to put in place laws and workplace rules to protect women from sexual harassment, and what we’re seeing is that millennial women are flexing their muscles and making use of these laws.”

But confronting these issues on the job goes way beyond what’s written into US law, according to Maya Raghu, director of workplace equality and senior counsel at the National Women’s Law Center.

“These experiences are all too common,” says Raghu. “For too many years, countless women and many men have been suffering in silence, and it’s because the risk of coming forward is too high [and] there’s too little information out there about people's rights and what the process is like. As the poll shows, there’s no trust in the systems in workplaces, in schools [and] in the military that were supposed to respond and to help them.”

So, what should victims of workplace sexual harassment know about dealing with these situations today? Raghu has a few helpful tips.

1. Know how to spot harassment

In order to spot workplace harassment, know how it is defined.

“Sexual harassment is unwelcome behavior that happens in the school [or] in the workplace because of your sex,” says Raghu. “It can mean something like unwelcome sexual advances. So [for example], your supervisor says to you, ‘You want to keep your job? You have to have sex with me.’ Or it can be a series of comments or conduct that creates an intimidating, hostile or offensive work environment, so sexual comments by supervisors or co-workers about your body, your sex life, or obscene pictures.”

Title VII of the 1964 Civil Rights Act prohibits employers from discriminating against employees on the basis of race, color, national origin, religion, and sex, which includes sexual harassment. And according to Raghu, sexual harassment doesn’t just have to be about sex.

“It can be based on your sex or your gender,” she says. “So for example, women who work in male-dominated fields like construction face incredibly high rates of discrimination, and hostility and intimidation, [and] denigrating comments about women. And a lot of men face the same type of hostility, having other men question their sexual orientation or grating names.”

2. Know how to report harassment

If you do feel comfortable coming forward to report sexual harassment, there are a few crucial steps you should take.

“First, figure out what is it that you ultimately want,” says Raghu. “If you came forward and reported, what is the outcome that you would like to see? Is it that you just want the harassment to stop,” or do you want this person terminated from the company?

If you’re thinking of coming forward, Raghu says you should talk through the issue first with family, friends, trusted co-workers and individuals in your professional network.

“Sometimes when you talk to other co-workers, you might find that you’re not the only one that this has happened to, and there are other people who have been keeping silent as well out of fear,” says Raghu. “It can be very empowering to know that you’re not alone and that you’re not making this up.”

She later adds: “You’d be surprised by how many people have probably encountered the same types of behavior in their own workplaces or their own lives.”

Once you’ve decided to speak up and you have determined your objective, Raghu says it’s important to know what your employer’s policies and procedures are as they relate to workplace harassment.

“Another really important piece of advice is to document everything,” she says. “Whenever there is a comment, conduct, or if you’ve observed something, write [it] down and keep really detailed notes. Keep any emails, text messages, social media posts — all of which will be really helpful evidence if you do decide to come forward at some point.”

If you think you’ve experienced sexual harassment and feel ready to report, spend some time researching these laws where you live — Raghu points out that federal laws only protect employees in workplaces that have 15 or more workers.

“Under state and local laws, people who work in very small companies can be protected,” she says.

Additionally, if you can’t report your concerns to a supervisor or manager, Raghu says victims can seek out state or local workplace protection agencies.

“I have never reported at my workplace,” says Julie Bailey, a Takeaway listener in New York City. “I was afraid of the backlash, of not just being a woman, but a woman of color. You just put your head down and just try to deflect and ignore [the harassment] and keep it moving. It may be cowardly as a position, but it’s survival.”

While Bailey may be afraid of retaliation, Raghu says it’s important to remember that such behavior is against the law.

“Unfortunately, it’s very common in these situations, which is why so many people choose not to come forward,” Raghu says. “It is a huge risk and a huge gamble — people are putting their careers, not just their current jobs, on the line. People who do come forward are often labeled liars and troublemakers, which are labels that can haunt them throughout their careers and essentially get them blackballed in their industry.”

Have you ever experienced sexual harassment on the job? How did you handle it? Comment or call The Takeaway at 1-877-869-8253.