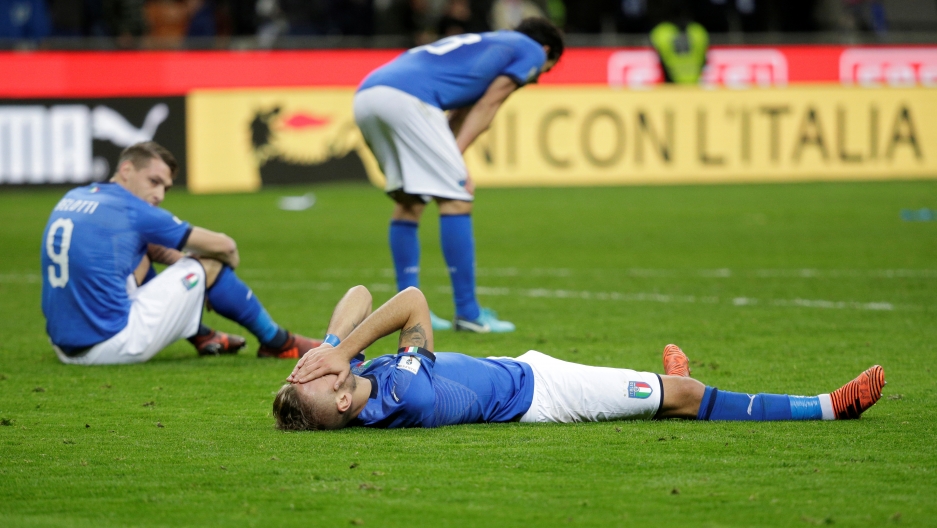 Italy players look dejected after their failure to qualify for the 2018 World Cup in Russia.

The agony of defeat. That's one way to describe the mood in Italy right now, after the Italian national soccer team failed to qualify for the men's World Cup in Russia next year.

It’s the first time in 60 years that Italy won’t be represented on soccer’s biggest stage. Generations of Italian fans have never experienced this. And they’re taking it hard.

The president of the Italian soccer federation said weeks ago that it would be an “apocalypse” if Italy didn’t qualify. He meant that in a reassuring way. But his choice of words proved prophetic.

Italy needed to score more goals than Sweden over a two-game playoff series. It failed to score at all, while Sweden scored one. And Carlo Tavecchio’s apocalypse was served.

Journalist Tancredi Palmeri with BeIN Sport used different somber words to describe what it felt like Monday night in Milan, at the end of the second game with Sweden.

“It was like hearing the blow of death, for football at least,” Palmeri told the BBC, using the preferred European term for soccer. “The stadium went silent.”

Palmeri also describes seeing the Italy captain, 39-year-old goalkeeper Gigi Buffon, cry at the end of the match even as he apologized to the fans.

“I’m sorry because we failed, when we could have accomplished something great instead,” Buffon said.

The pain of elimination was especially great for Buffon. He’s a soccer legend, a World Cup winner in 2006 and still admired by fans around the globe.

He had said earlier that the 2018 World Cup in Russia would be his last. After that second game against Sweden, he announced his immediate retirement from international soccer. And he cried.

“He was walking in front of us and he was still crying,” said Palmeri. “When you fall from the stars the hit is much heavier and painful.”

Italy fans are feeling that hit right now. And they blame one man above all: coach Gian Piero Ventura. They're calling him clueless, incompetent and worse.

“I’m sorry for the outcome,” said Ventura at the post-match press conference.

Understatement of the year, I would add.

OK full disclosure. I am one of those disillusioned Italy fans. I grew up in Italy, learned to play soccer there, and still feel the passion every time the “Azzurri” take the field. And I root for them harder than I do for my native Mexico, or my adopted home team, the United States.

But I suppose this shock Italian elimination will make things easier for me during the men's World Cup tournament next year. I won't have to choose. No Italy, no US (which also failed to qualify).

So, it's simple. VAMOS MEXICO!