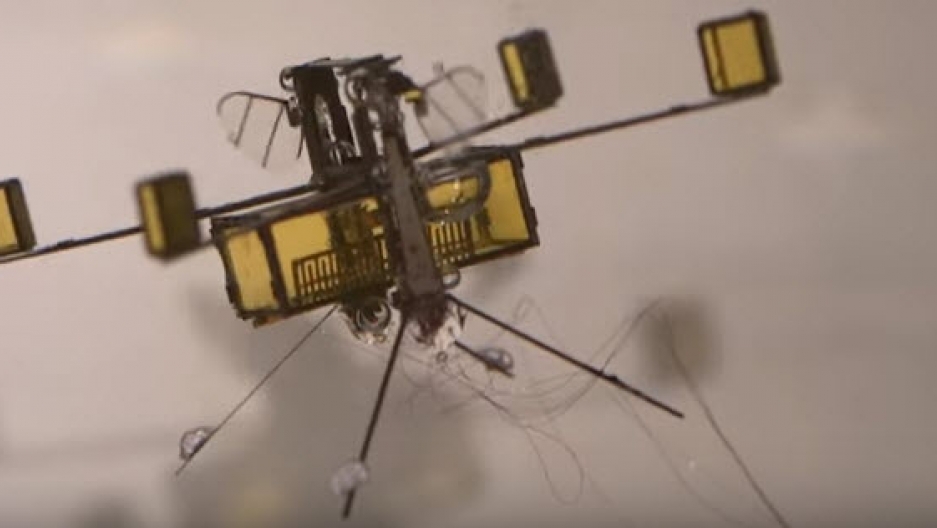 Inspired by insects, researchers at the Wyss Institute and Harvard University's John A. Paulson School of Engineering and Applied Science have developed a robot capable of flying and swimming.

Imagine going to the beach and catching sight of a bee buzzing past you, then watching as it dives into the water, swims below the surface and shoots back into the air a few seconds later.

The beach setting may just be a November dream — but the rest of that vision? Not so far from reality. Researchers have designed a new RoboBee that can fly, dive, swim and launch itself back out of the water. They described their work recently in the journal Science Robotics.

Co-author Farrell Helbling, a Ph.D. candidate in the John A. Paulson School of Engineering and Applied Sciences at Harvard University, says that engineering the robot’s amphibious skill took “a lot of fluid mechanics.”

“So air is 1,000 times less dense than water, so we flap at a much higher frequency in the air — around 265 beats per second in the air,” she says. “And then once we dive into the water, things slow down a little bit and we start flapping at a much lower rate, around nine times per second.”

To make that happen, she says the robot’s wings had to shrink a little from earlier RoboBee versions. “A really big part of the work was trying to find the sweet spot of what our wing size needs to be to both operate in air and in water,” she explains.

But for such a lightweight robot (it’s just 175 milligrams), Farrell says the real challenge was engineering it to break through the water’s surface again after a swim. “The surface of the water kind of acts like a brick wall,” she says. “We're not allowed to break it ourselves, so we had to come up with a new mechanism.”

To do so, the researchers added a tiny electrolytic plate to the robotic bee’s back that chemically decomposes water into oxygen and hydrogen gas. The gases collect in a tiny chamber to make the bee more buoyant, allowing its wings to gently break through the water’s surface. Then, an onboard “sparker” ignites the gases, causing an explosion that launches the robot back out of the water and into the air. (From there, the robot can glide to safety, but has to dry off again before it can fly.)

For now, the amphibious bee is restricted to in-lab adventures only — it’s still tethered with wires to an external power source. But once the bee is wireless and equipped with sensors and other gear, Helbling says it could aid in everything from water quality testing in lakes to search and rescue operations. And just as with real bees, the little robots could be powerful in great numbers.

“I think that many applications such as search and rescue or environment exploration when you want as much information in parallel as possible, it would be nice to have a large distributed system of many tiny robots,” she says.

But in these early days, Helbling says she’s just excited the little robot can operate in water at all. “When my colleague came to me, Kevin, and said, 'I think that we should put the bee in a tank,' I was very worried about what was going to happen, both to the robots and to us in the lab, because there's a lot of electronics everywhere,” she says. “And just seeing it swim for the first time was something that was really impressive to me.”