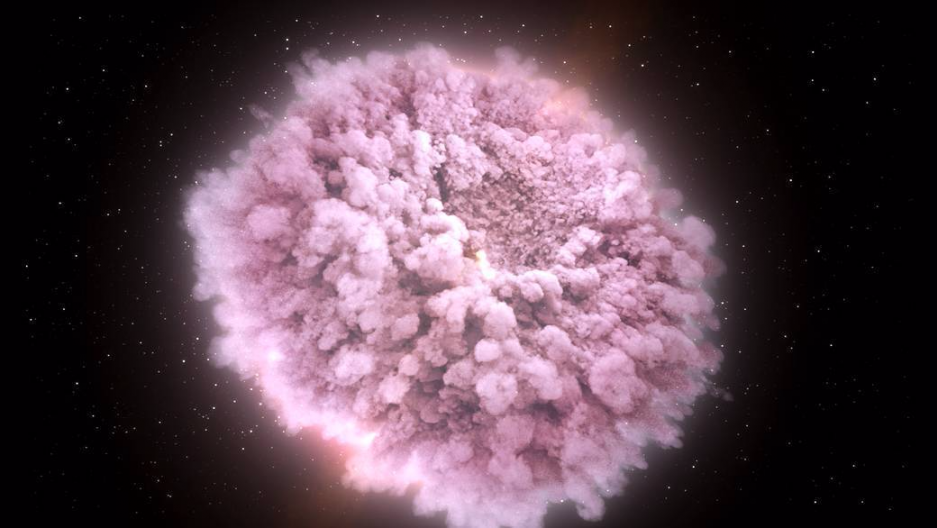 This illustration shows the hot, dense, expanding cloud of debris stripped from two neutron stars just before they collided. Within this neutron-rich debris, large quantities of some of the universe's heaviest elements were forged, including hundreds of Earth masses of gold and platinum.

Around 130 million years ago, two neutron stars — those strange, compacted cores of dead stars — smashed into one another. The resulting “kilonova” explosion sent ripples through space-time and hurtled heavy metals like platinum and gold into space. Now, astronomers have detected the signals from that long-ago collision, in the form of gravitational waves and electromagnetic signals.

“So first, on Aug. 17, early on, we heard more than a hundred seconds of gravitational waves coming from the end spiral, the death spiral of a pair of neutron stars,” says Vicky Kalogera, an astrophysicist at Northwestern University and member of the LIGO Scientific Collaboration. “They were going one around the other until they came so close that they actually collided.”

First came the gravitational waves, she explains. Then, just two seconds later, scientists detected a flood of waves arriving from across the electromagnetic spectrum. “It started with gamma rays, the most energetic light we have, and continued with optical light,” she adds, “also later X-rays and eventually radio waves that continued over hours, days and weeks.”

The discovery was announced in October alongside a flurry of scientific papers documenting the findings. In the past, LIGO scientists have recorded gravitational waves from merging black holes, but this is the first time gravitational waves have been detected alongside electromagnetic signals from the same source. “There is an incredible range of new science here and it's really hard to pick out what's most exciting,” says University of Chicago astrophysicist Daniel Holz, also a member of the LIGO Scientific Collaboration.

As he explains, scientists have long theorized that gravitational waves move at the speed of light, but the waves from this collision finally confirmed it. “We showed that gamma rays and gravitational waves … after traveling for over 100 million years, they arrived at Earth within two seconds of each other,” he says.

Likewise, take a hard look at any jewelry you’re wearing and consider that for a long time, we haven’t had a good explanation for where heavy metals like gold and platinum come from. According to Holz, the Big Bang explains the creation of some lighter elements like hydrogen and helium. “And then those elements form stars, and the stars burn and produce heavier elements, and that story works all the way to iron … but not past iron,” he says.

But when scientists measured the light from the neutron star collision, Holz says they found the “signatures” of heavier elements like gold and platinum being produced and spewed into the cosmos. “And so we’re actually watching the movie of the formation of that gold and platinum,” he adds. That means the gold in your wedding band or necklace chain may have been forged by a long-ago neutron star collision in our own Milky Way. “That gold exists in the gas that surrounds the sun,” Kalogera says. “It becomes planets, it goes into our mountains and we get it in the mines and we make our jewelry and our watches. But it's not made in the Earth. It pre-exists.”

In fact, scientists estimate the recently discovered neutron star collision spewed out 200 times the mass of Earth — just in gold. But collectors, fear not: The metal is still precious, as is the event that made it. “In a galaxy like our own, these collisions maybe happen a dozen times, maybe a few dozen times per millions of years,” Kalogera says.

But beyond gold, there’s another aspect of the discovery that has Holz particularly excited. He says information gleaned from the collision is giving scientists a new way of measuring the expansion of the universe.

“By using this event, by the fact that we've detected it both in gravitational waves and in light, we can do an absolutely unique sort of measurement that we've talked about and we've wanted to do for a long time, but we've never been able to do before,” he says. “And now we've done it, and we can measure this expansion, how quickly the universe is expanding around us right now. And by doing that, we get an overall sense of the scale of the universe and the age of the universe. And it's just, it's beautiful.”

The measurement still has some errors, but Holz is undeterred. “It's the very first time we've done it, but it's consistent with what we've known before and the whole picture just kind of fits together. And that's remarkable because we've never been able to do this before. And yet, it all kind of works.”