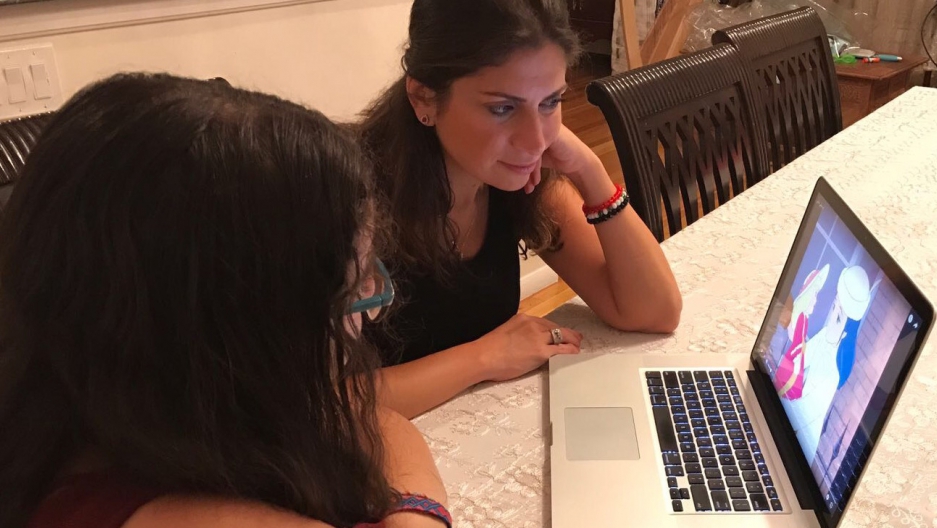 Of all the things Syrian refugees leave behind, one of the most surprising is language. Not the dialect they speak at home, but the Arabic of written and formal speech. It’s the form of Arabic used in school, books, public life and media.

It’s a simplified version of the Arabic of the Quran, and you need it to function in the Arab world. One displaced Syrian, concerned that her daughter becomes literate in Arabic, turned to cartoons for help.

Dima Basha and her daughter came to the United States from Aleppo in 2012. When the war broke out in their home city, they couldn’t go home.

Now living in a suburb of Boston, the Syrian mother and daughter still speak to each other in their home dialect — and in English, too. But Basha began to worry that her daughter, Angelina, was missing something important: lessons in Modern Standard Arabic, fusha, something every Syrian student gets at school.

So, Basha put her daughter into Sunday fusha classes at their local mosque outside of Boston. Angelina hated those classes and begged to quit.

Then Basha had another idea.

“I remember when Angelina was 7 years old, she was watching SpongeBob in Arabic,” Basha says. “Of course, it was in fusha. I didn’t notice until she was laughing loudly and saying, ‘Mom, can you believe it that sirwal means pantalon?’ She was laughing that it’s a totally different word. And I thought, if she keeps watching cartoons in fusha, then she will learn a lot of the language.”

It’s not just that fusha and their local dialect have different vocabularies. Basha says there are different pronunciations and grammar rules, too.

She's glad that Angelina likes watching cartoons, but she says the real education happens when they watch together.

“I have to be with her because I want to make sure that she understands it,” Basha says. “Because if she’s not understanding it, it’s like passing the time, listening to nonsense.”

Angelina says if she doesn’t understand a word, she tells her mother to pause the video, and she asks what the word means. "They use very hard words in the cartoons!” she says.

The cartoons sometimes use words that aren’t part of Angelina’s vocabulary. She was only 7 when they left Syria.

Every few days, Basha and her daughter pull a new Arabic cartoon off YouTube. One of their favorites is “Sarah Crewe,” a Japanese anime version of the Victorian story, “A Little Princess” — dubbed in fusha.

Basha tends to pick cartoons she watched as a child. She finds them more meaningful than the current crop, which she says are like video games.

“It was more international stories, more passionate, and about a struggle of a girl or boy in his life,” Basha recalls. “Many of the cartoons would also indirectly teach good manners. And I thought, 'I’ll get two in one!'”

But to be fully literate, you need also to be able to read and write the language. So, during summer vacation, Basha had Angelina read and record fusha passages on her iPhone. Angelina would send them to her mom at work, and Basha would sometimes send back a corrected version.

“Arabic is a very beautiful language, very rich,” she says. “I want Angelina to understand the news, the poetry, the stories. It’s amazing. When you dance to an Arabic song and you understand the meaning of it, you dance differently.”

Angelina understands all this. She says Syrian culture is still a big part of their lives. “We celebrate mostly all the holidays,” she says. “Syrian food is the best food there ever was. Everyone should try it.”

And Angelina thinks she may find herself back in Syria one day.

“If I go back to school in Syria, I’ll probably need to be talking, writing and reading in fusha to understand everything going on,” she says. “Or, if I got a job there when I’m older, I’d need to read, write and talk fusha.”

Though Angelina knew some fusha when she arrived and has learned more from the cartoons, she hasn’t kept pace with her friends back home. Angelina just turned 13 last month.

“I would say that her Arabic now is fourth-grader, not more than that," Basha says. "She hasn’t been acquiring new words, new ways of putting the words. This is what I am worried about.”

Basha says it’s not hard to get her 13-year-old to watch cartoons in Arabic, to learn more.

“Whenever she doesn’t do it, I will tell her, ‘We’re going back to Sunday school.'"