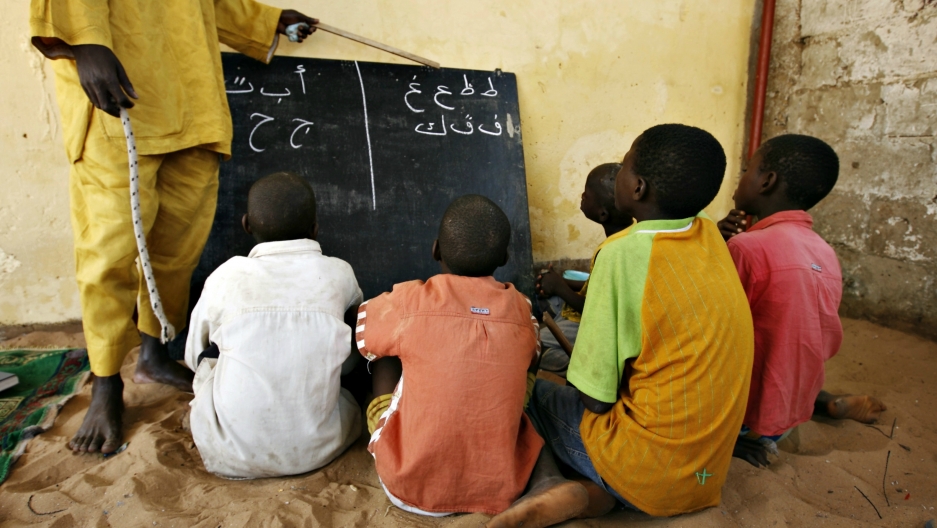 Students learn Arabic script at a Quranic school on the outskirts of Senegal's capital Dakar, May 7, 2008.

Looking tired and hungry, Bouba and Moussa Cisse, brothers aged 5 and 7 respectively, were begging recently near the Liberté Six street market in Dakar.

Hailing from the Senegal’s southern region of Kolda, they aren’t the only ones who have come to the country’s capital to earn a living on the street. But they are part of a particular community of mendicants known as talibés. The money they collect on the street goes to their Quranic instructors, known as marabouts, in exchange for teaching, food and housing.

Their overseers are not kind, Bouba added. “If we fail to bring money home, we will be beaten and punished by our teacher,” he said. “It’s been a long time since we have even heard from our parents.”

Their story echoes that of thousands of other child beggars roaming the streets in Senegal, say local authorities and human rights groups.

Marabouts force an estimated 50,000 children living in traditional Quranic boarding schools, or daaras, to beg for food and money, according to a recent report from Human Rights Watch. UNICEF has put that number at more than 100,000 and has called the situation modern slavery.

“We believe that learners must acquire blessings from their teachers — it has happened in the past. They should not question any errand assigned them by their teacher. They should just obey. It’s part of the learning process.”

Last year, the Senegalese Ministry of Women Children and Family Planning introduced a new program called Remove Children from the Streets to crack down on coerced child begging.

In more than 60 street operations, police and social workers claimed they picked up more than 1,500 children, placed them in shelters and attempted to find their parents to explain how they might be breaking laws to curb child exploitation.

Today, however, Human Rights Watch representatives claim most of the apprehended children have returned to their marabouts and are back on the street seeking handouts.

“The impact of the program was further undermined by the government’s insufficient allocation of resources and lack of prosecutorial mechanisms to support the pronouncement,” noted the Human Rights Watch report called, “I Still See the Talibés Begging.”

“We have documented two deaths, six attempted rapes and 28 beatings and illegal imprisonment perpetrated against these children,” said Corinne Dufka, program director at Human Rights Watch in West Africa, based in Bamako, Mali.

“These Quranic teachers are so powerful that they are untouchable … no one has ever been prosecuted for these crimes,” she said. “I call it exploitation in the name of religion.”

Senegalese views on the practice are mixed.

Some think it’s an acceptable tradition.

“We believe that learners must acquire blessings from their teachers — it has happened in the past,” said Abdulai Sane, a teenager who is not a talibé. “They should not question any errand assigned them by their teacher. They should just obey. It’s part of the learning process.”

“As a human rights campaigner, I have been threatened several times for criticizing street begging and the abuses children face,” he said. “I have text messages to that effect. Some believe the practice is part of the religious culture for kids to suffer and earn a blessing from their teachers."

Marabouts refused to speak on the record. They admitted privately that they regularly send dozens of talibés on begging assignments.

You can find many talibés on the beach in Dakar, which is a popular draw among vacationers and locals.

Six-year-old Ndeye Sow, a talibé, ate coconut as she panhandled near tourists lying bathing under the hot sun. She lost contact with her mother living in Kaolack near the Gambian border more than a year ago when she came to the capital. She now lives with her aunt whose husband is a marabout.

“Sometimes she reminds me not to be late coming here," she said, referring to the beach. "Whatever I collect, I give it to her.”

It’s a similar story for Allieu Diagne, a boy of 5. He walks barefoot because his slippers have fallen apart. But he smiles as he recounts his difficult life.

“Sometimes I rush toward taxis to chase people to give me money,” he said. “The other day, a taxi driver almost knocked me down. But it’s my normal routine. If I don’t beg, I won’t eat.”