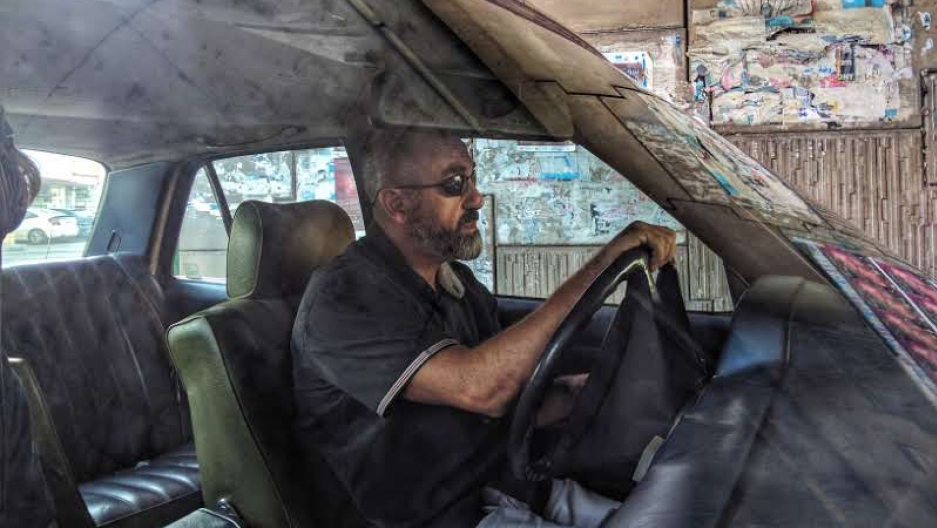 There is a sound so prevalent on the streets of Beirut that locals hardly even hear it anymore: the two-tap beep on the horn by a taxi driver looking for business.

Unlike in New York or London, where a passenger might have to crane their neck looking for a cab, residents in Lebanon’s capital practically have to fight them off with a stick.

“When passengers walk, sometimes they don’t notice the taxi behind them. So we make the horn to get his attention,” says Gabriel Saad, who has been driving a taxi in the city for 15 years.

“Sometimes drivers beep too much,” he concedes, in between beeps.

In cities around the world, ride-hailing apps like Uber are crowding out licensed taxis. But in Beirut, they face a formidable foe. Shared cabs are still the preferred way for many in the city to get around.

“I take it every day to go to work,” says Miriam, a passenger picked up in Saad’s taxi, who only gave her first name. “I don’t like to be so stressed by all the traffic while I’m driving, so I take a taxi.”

A shared ride — called a “service” (pronounced servees) — costs just over a dollar a trip and will get you about 2-3 miles depending on how busy the roads are. If the cab is empty, passengers can choose to pay a higher price to have it all to themselves.

Taxi drivers stalk the city with one eye on the road and the other on the sidewalk, looking for passengers. Negotiations take place in a matter of seconds through the car window.

“It must be a maximum of a few seconds to pick up the passenger, to see where they are going and if you are going the same way,” says Saad. “If somebody argues with you, you need seven seconds.”

Partly due to the lack of a public transportation system, cars rule the road here. According to a 2014 study, 70 percent of vehicles on Beirut’s streets are private cars, and 19 percent taxis. 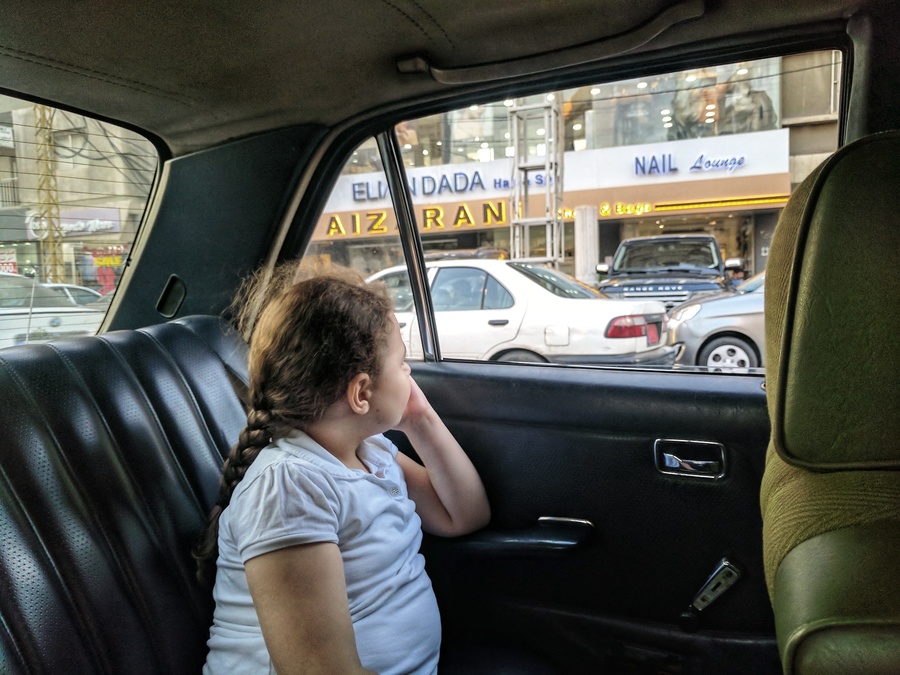 A passenger sits in a shared taxi in Beirut.

Uber arrived in Lebanon in 2014, and has grown rapidly ever since. It now has over 2,500 drivers working in the country and 55,000 people have taken a trip with the app in the last three months.

But Lebanon’s taxis are proving remarkably resilient. Saad hasn’t noticed a drop-off in customers. In fact, he hasn’t even heard of the company that has devastated his sector around the world, and led to bans in some cities.

“Eighty percent of people will take service, not taxi, because it is cheaper. Unless they are rich. Or if they want to go really fast to a meeting or something,” Saad says.

The minimum price for a ride with Uber is currently $3.33 — more than double the cost of a service. The app in Lebanon hasn’t rolled out UberPOOL, the company’s lower-priced carpool option. Uber also faces a disadvantage because customers can only pay by credit card, in a country whose economy still runs largely on cash transactions.

A spokesperson for Uber said the app “is proving to be popular in Lebanon for the convenience it offers, and we have been moving tens of thousands of people around Beirut on a monthly basis.”

Some Uber customers cite safety as a reason for using the app in Beirut.

The Lebanese government, and the country’s powerful taxi drivers union, have sought to reduce the impact on traditional taxi drivers. 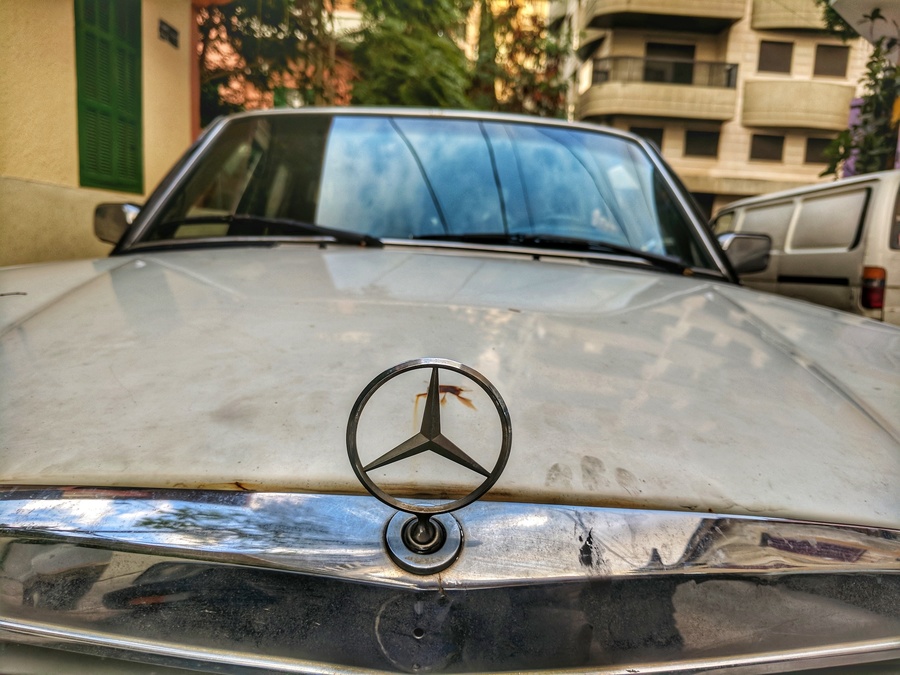 This is Gabriel Saad's taxi, a 1980 Mercedes Benz.

In other cities, Uber has operated on a different legal footing from taxis. But here it is regulated like any other taxi, requiring drivers to license the vehicle as such and display red license plates.

These red plates are valuable and hard to come by. A limit set by the government on the number of licensed taxis on the road was supposed to guard the livelihoods of drivers like Saad. But a far bigger menace than Uber is the black market in fake red license plates.

There are roughly 30,000 registered taxis operating in Lebanon, but urban planner Petra Samaha says there could be an equal number with forged red plates.

“There is a huge black market. The official price is supposed to be $5,000, but many are going for $20,000,” says Samaha, who has published research on public transportation in Lebanon.

Saad drives a 1980 Mercedes Benz, a model that used to be omnipresent on the streets of Beirut. Famed for its durability, the cars outlasted others and gained an iconic status here.

The car, and the service system, are a Lebanese institution today. Movies and documentaries have studied the intricacies of the job here.

“I consider taxi drivers the main characters of the city,” says Hady Zaccack, a Lebanese filmmaker who made a documentary about three drivers in Beirut.

“The car is like a mobile salon where all the conversations take place, from politics to social issues. Every taxi driver has their own political vision, it’s like a microcosm of the society.”

Rides can sometimes be a buzz of conversation between strangers that have been thrown together by chance.

Saad says he’s cautious in starting conversation (there’s a stereotype that service drivers can be overbearing in their place of work).

“Some people don’t like talking too much,” he says. “I try to talk a little bit. If they talk to me, I continue.”

Politics is off the table, he adds — it’s too divisive. But bemoaning the state of the country is a great unifier.

“We talk about life, about problems in life, but mostly about the problems in Lebanon, this is the best thing.”

Saad entered the profession after taking over from his father, who was a taxi driver in Beirut for 20 years. His father handed down this classic Mercedes to him when his eyesight failed and it was no longer safe for him to drive.

The fuel consumption is terrible, but Saad says he will never sell.

“I love this car. Because without this car you wouldn’t see me here,” he says. “He raised me and he sent me to school and college from this car. He worked on this car and he paid for everything. I can still smell him in this car.”