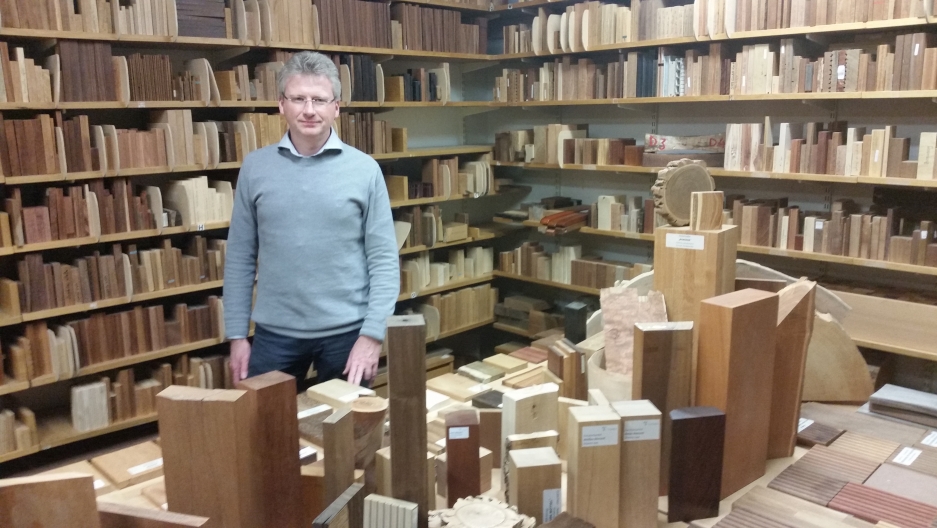 Gerald Koch, who runs a wood identification laboratory in Hamburg, calls himself a "wood detective."

The words “endangered species” might make you think of tigers and panda bears. But in 183 countries, an international law also protects the wood from endangered trees — which can affect everything from kitchen tables to paper plates.

The Convention on International Trade in Endangered Species, or CITES, was created in the 1970s, but it's been expanding and evolving ever since. It takes aim at the persistent problem of deforestation. One recent study suggested that half of Amazon tree species are at risk of extinction. In Madagascar, illegal rosewood logging has left a national park littered with tree stumps.

Germany is one country that has cracked down on the trade in protected wood, thanks in part to its role as an importer for the European Union. The country has a secret weapon in its fight against the illegal wood trade: a laboratory in Hamburg where a team of scientists calls itself “the wood detectives.”

Leading the team is Gerald Koch, an expert on rare woods who grew up working in his family's sawmill. “As a small boy, I went with my family and had to help,” he said. Now, his laboratory contains a library of wood species — 35,000 in all.

The samples — from thin sheets of eucalyptus to a thick hunk of expensive ebony — allow Koch's team to identify unknown types of wood. By comparing the unknown species to known samples, under a microscope, he and his colleagues can stop the trade in regulated wood before it's begun.

To illustrate his method, Koch pulled out an inexpensive guitar that was imported from a factory in China. “We have identified about 20 different timbers,” he said. “Altogether, this is the global market, we say. In one guitar.”

Koch said that the factories responsible for the cheapest products often cut corners by using leftover wood. “Mostly, they don't know what they use,” he said. “Wood is wood for them.”

This week, a fence post declared as chestnut arrived in the mail. It was sent in by German customs, which collects samples not only of imports but also products sold on platforms like eBay. Koch's colleagues cut off small pieces, boiled them, and then sliced off sheets so thin that they could be placed under a microscope. The fence posts turned out to be cheap hazelnut.

The idea behind the regulation is that most companies won't want to pay the high costs of going back to the drawing board and sourcing the right kind of wood. So, perhaps they'll be more careful next time. “It can be very expensive for them,” Koch said.

Not everyone is convinced that these regulations work. George Gruhn, a Nashville guitar salesman, says his industry has been paralyzed by regulations on rosewood, a crucial raw material. To sell used guitars built decades ago, you now need an expensive permit.

“You can’t get wood to make new guitars, and on vintage and used guitars, you still can’t export them without the bleeping permit,” said Gruhn, who also has a degree in zoology. He thinks that if countries could sustainably make money from trees, they’d have an incentive to protect their forests.

Still, for the time being, Koch feels it’s his job to enforce the existing laws. And he thinks it’s up to all of us to know where our products come from. "We say in German, 'Unwissenheit schütz vor Strafe nicht,'" he said. In other words: "What you don't know ... can still have legal consequences."

So, the next time you spot some vintage wood furniture at a yard sale, be careful. The wood detectives may be watching.