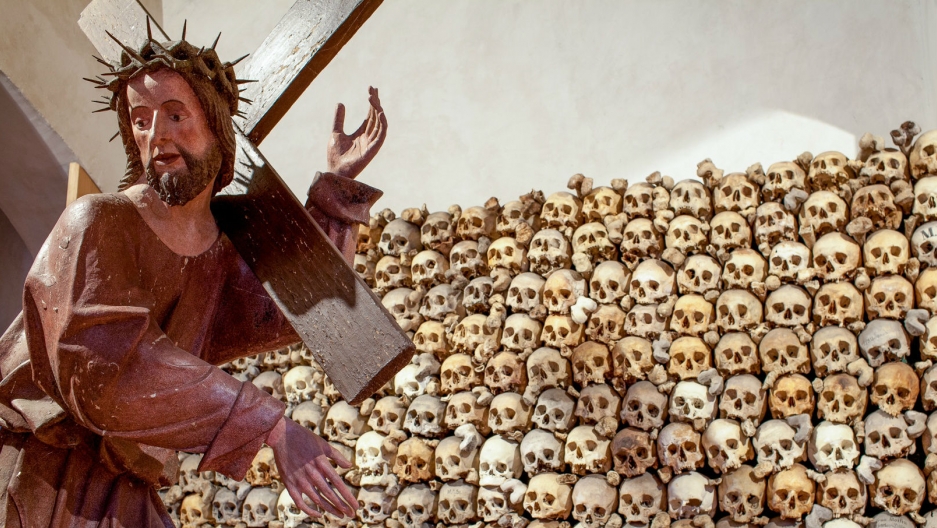 The Latin phrase memento mori means "Remember that you have to die." For a photographer from California, these have become words to live by.

Author Paul Koudounaris has made a career out of photographing skulls, skeletons and mummies displayed in sacred spaces around the world. Some of the memorials shown in his latest book, "Memento Mori: The Dead Among Us," are arresting. And that’s the point.

In basements and caves, crypts and catacombs, these centuries-old bone tableaux are meant to speak to the living.“This is is a human compulsion to keep the dead literally among us, to not push them away and ... ghettoize them in a cemetery the way we do now in Western culture," says Koudounaris, whose doctoral degree is in art history but whose work veers into philosophy. 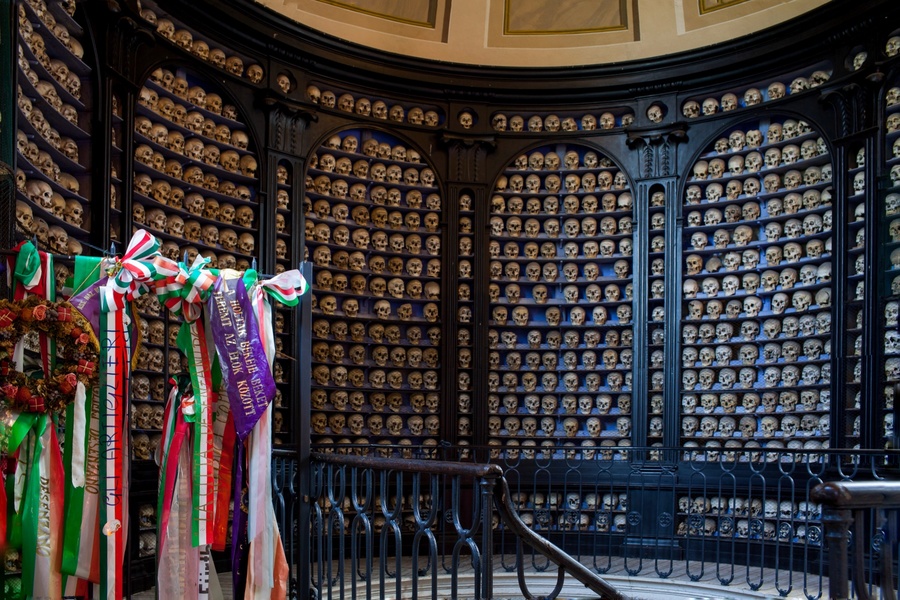 “If you look at death as a boundary, it becomes culturally relative. In Western culture [it’s] a Siegfried Line which you don't cross,” he says. “And we don't realize how idiosyncratic and weird that is. Because traditionally, it's been much more common to keep the dead around, even in physical form, with the bones or the mummies, and to interact with those people — not cast them aside — but to keep them as members of the social group or even the family.”

The Catacombs of Paris may be the most famous of the world's bone rooms, or ossuaries. But Koudounaris points out, the Paris catacombs were not intended as sacred spaces. They were created by French authorities for entirely practical reasons. 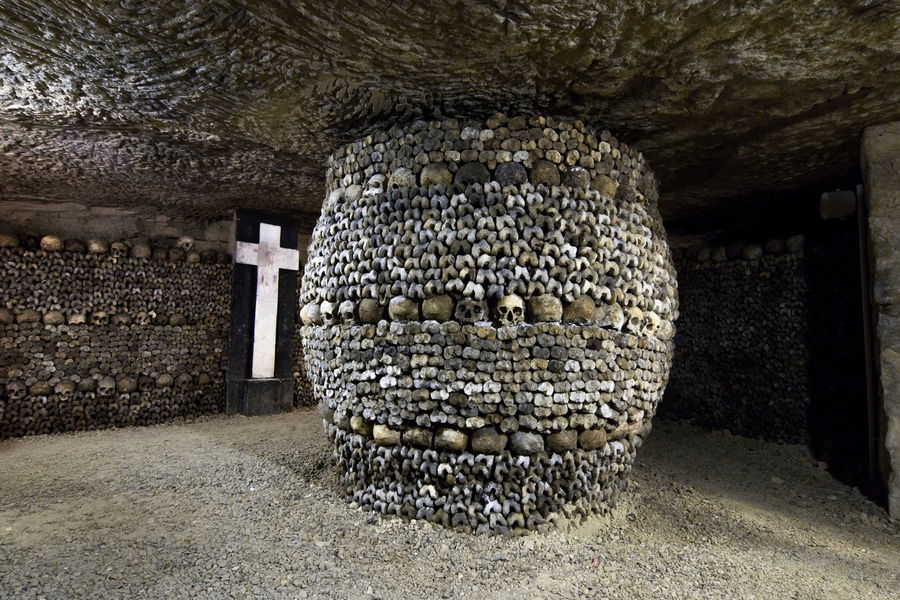 "They had to evacuate the Cemetery of the Innocents, because they had so many burials in there that the ground water was becoming infested with human goo ... it was a Napoleonic health decree," says Koudounaris. All of the remains were exhumed, which meant there were many, many bones without a home.

"They threw them into a bunch of old quarries," says Koudounaris, "and someone came along to Napoleon and [said], 'Hey I got this great idea. You know, we're going to build the biggest macabre attraction in the world.'

"And of course, Napoleon always wanted bigger and better in everything, right?" continues Koudounaris. "It was designed to be exactly what it is: a tourist attraction. It was never a sacred space." 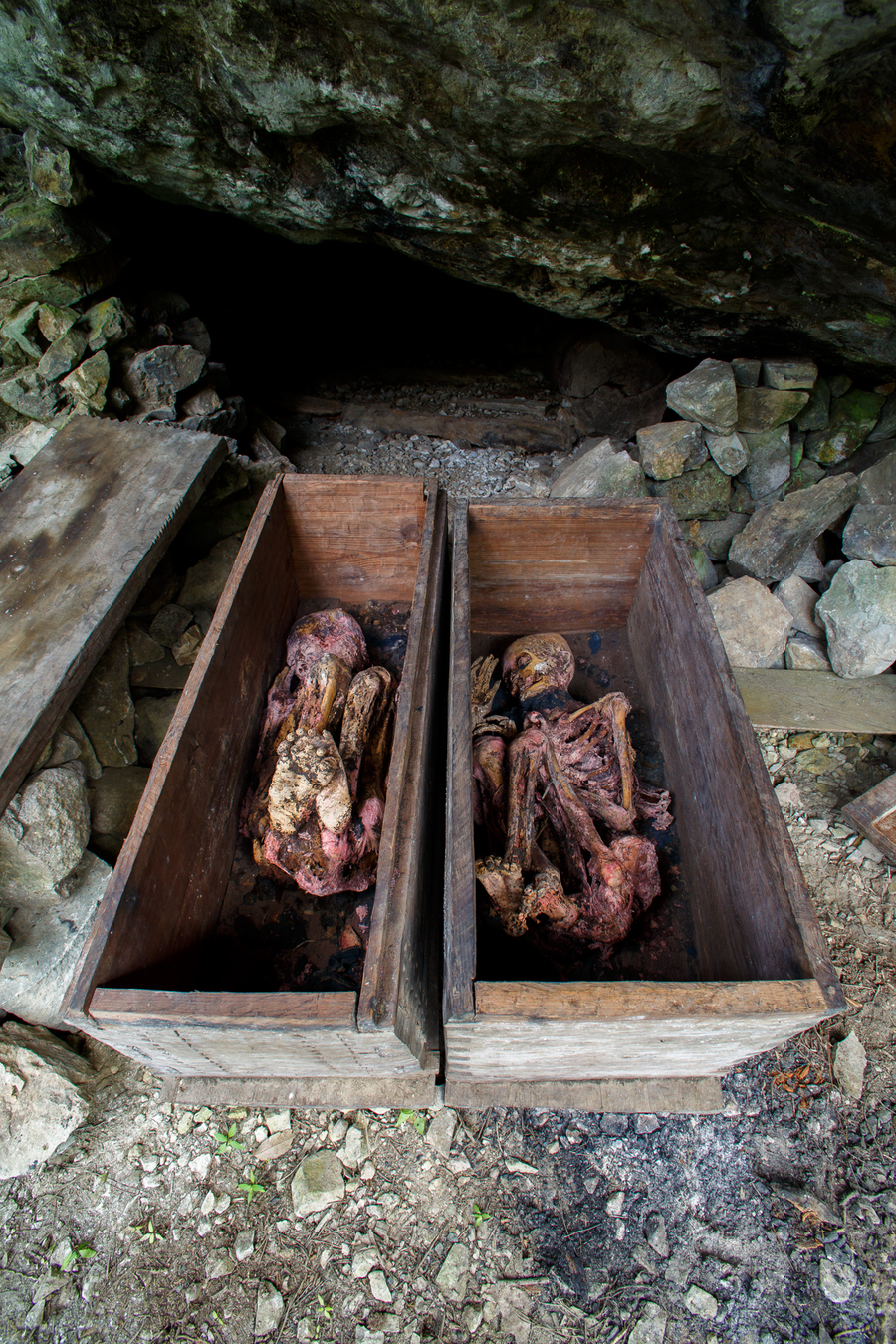 Koudounaris has photographed memento mori throughout Europe, the Americas, Africa and across Asia. He's learned the intricacies of each region.

He notes that when the Spanish ruled the Philippines, starting in the 16th century, people on some of the islands practiced mummification.

"They'd keep them around after death to consult with them to get advice with them and so forth," he says, "and the Spanish said, 'Nope, you're not doing this anymore. You gotta cut out the mummification of these people.'"

"Well they never actually stopped. They continued doing it in secret." 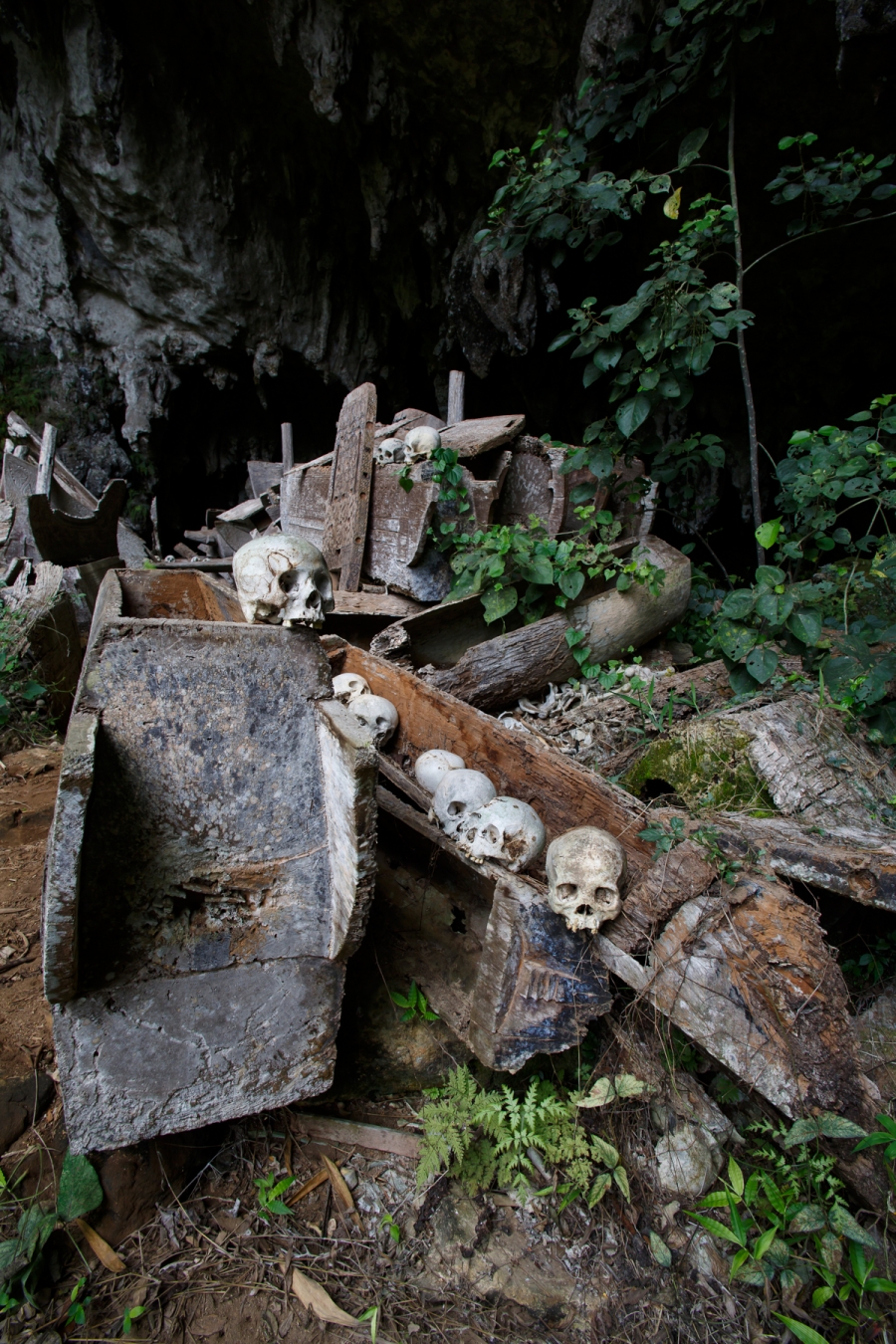 "And there is one cave in particular that they're still using," he says. "There are still mummies in that cave that are still fresh, and the local tribal people have covered it over with rocks so it just looks like a landslide. If you walk past it you'd never know. And when they want to visit those relatives they'll come over and they'll clear all those rocks away and go into the cave."

In Bolivia, Koudounaris documented the ongoing practice among some families of keeping shrines of skulls in the home. 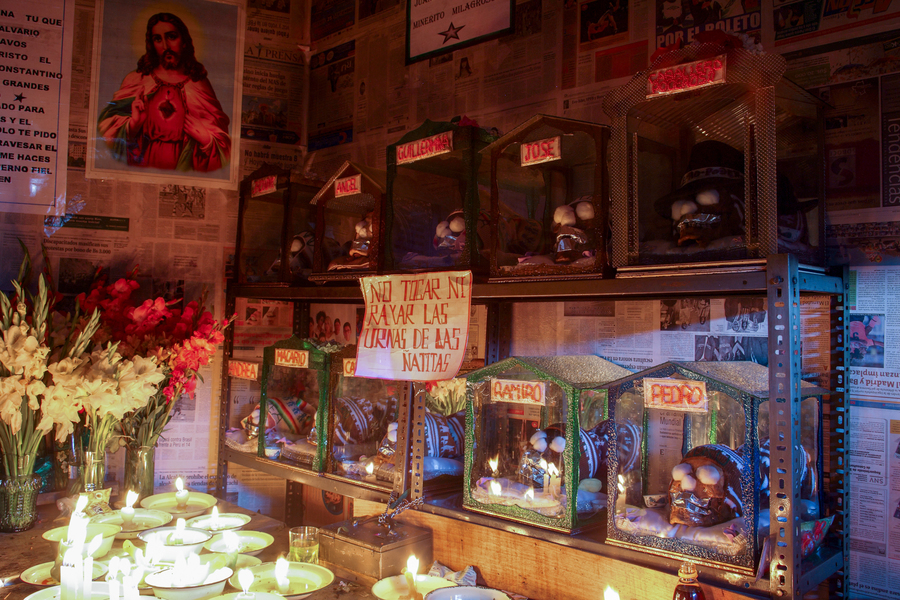 The ñatitas, he writes in his book, help with domestic problems such as schoolwork or medical issues.

"It's been much more common to keep the dead around even in physical form with the bones or the mummies and to interact with those people  — not cast them aside — but to keep them as members of the social group or even the family," says Koudounaris.

In Rwanda, where memories of the 1994 genocide can't be erased, remains of victims serve as a reminder — and a warning — to the survivors. 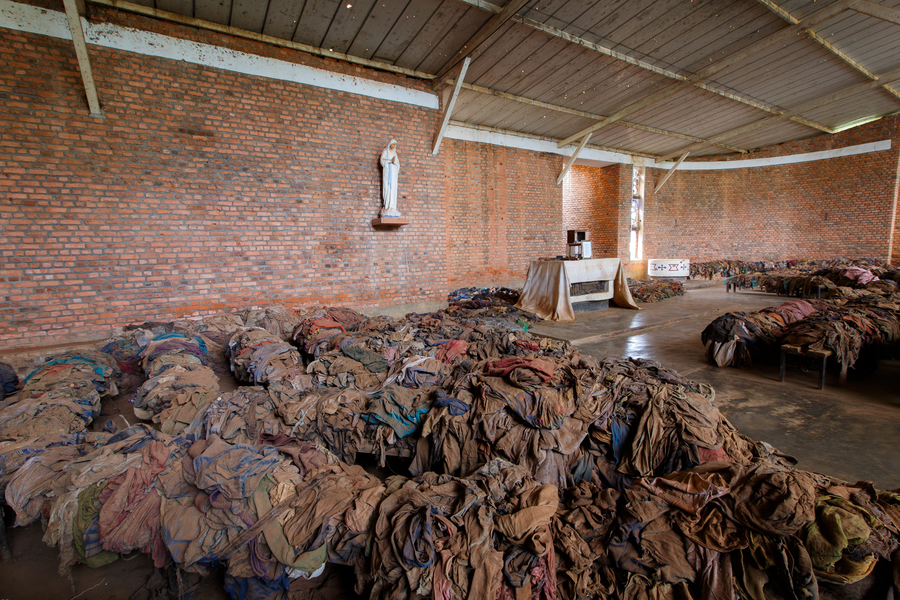 "There are terrible, terrible instances of people who had turned to the church for protection during the genocide and tried to hide in the church," says Koudounaris. "The Church had betrayed them."

In one of the churches, the pews are left littered with the clothing of people who died in the building.

"In some ways, those pews, filled with clothing, are more poignant to me than seeing the bones," he says. "There's something even more personal about just seeing the clothing stacked up on the pews."

Koudounaris has spent many weeks in the company of the dead, and he says he has gotten used to it.

"At first it is a little unsettling, and there is a sense that, you know, are we doing something a little sinister by peering beyond the veil," he says. "But you quickly realize that this not only is normal, it's actually kind of titillating and exhilarating to cross that border and to realize that for centuries, people would visit the dead and they would interact with them. And I would look into the eye sockets of those who had preceded me who were my relatives. And it's like I'm standing in the present. I'm standing among the past, but at the same time I'm contemplating my own future."