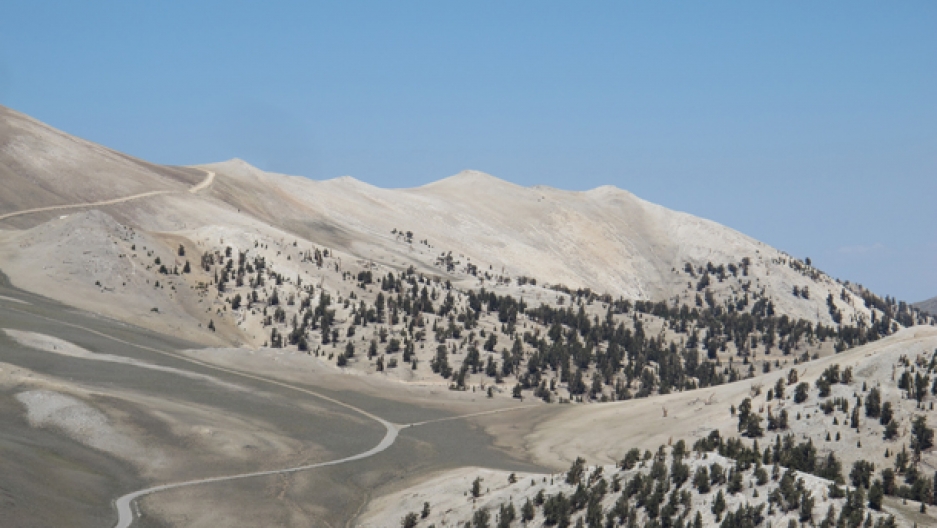 The tree line in the White Mountains. The older trees are mostly bristlecone pine, but younger limber pines now dot the landscape just above the old tree line.

Many species of trees tend to move to higher, cooler habitats in response to a warming climate. Now, research on two pine tree species in the western US Great Basin shows some species move faster than others.

Brian Smithers, who led the research at the University of California, Davis, says when he wanted to look at how trees are responding to climate change, he realized the high-altitude tree line is a "really nice experimental spot to do that.”

“It’s a real clear line of a species' range edge because it's controlled almost exclusively by temperature,” Smithers explains.

Smithers says when they began to take a close look at where new trees were growing, the tree line was moving upslope, as they expected it would, but the landscape “didn't look like we thought it ought to look.” Young limber pines are leapfrogging their cousins and taking over the higher ground.

“Adult bristlecone pines dominate typical tree line stands in most of the Great Basin, and you are hard-pressed to find limber pine adults in those forests right at [the] tree line,” he explains. “Yet the vast majority of the trees establishing above that tree line turned out to be this limber pine, which is typically found further downslope of bristlecone pine.” 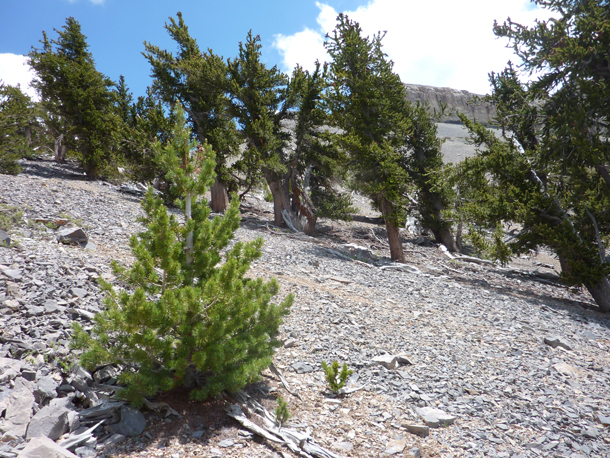 A young limber pine grows close to a stand of larger, older bristlecone pines on Charleston Peak in the Spring Range of southern Nevada.

The effect Smithers observed has taken place over the last 50 years. “That’s pretty fast,” he says. “A young tree can move about the landscape and respond to changing climate pretty quickly and, in fact, that's what we're seeing.” Smithers believes the limber pine is moving ahead because they have a "dispersal advantage.”

This advantage comes in the form of a bird called the Clark's nutcracker, which prefers the large nutritious seeds of limber pine to bristlecone pine. Bristlecone pine seeds are small and are adapted to be dispersed by gravity and wind. But in limber pine, the cones mostly get picked apart by Clark's nutcrackers, which harvest and cache the seeds — tens of thousands of them a year, all across the landscape.

Studies show that the nutcracker travels up to five miles in any direction, Smithers says, which spreads the limber pine seeds widely. The birds eat some of these over the winter, but they don't get to all of them. As a result, the seeds get buried at an optimal depth for germination, hidden from seed predators. This gives them a clear advantage over bristlecone pine.

Both types of pine are a “foundation species in these forests,” Smithers points out, so it's unclear whether one having the advantage over the other will affect the larger ecosystem.

“Without either one of them, you're looking at a sagebrush scrub or alpine environment, and the difference between a shrubland and a forest, or an alpine environment and a forest, are night and day,” he explains. “These forests bring with them a lot of species, and they contribute substantially to the diversity of the White Mountains. There are forest bird communities [and] they certainly provide refuge for larger game, like black-tailed deer.”

Smithers likens the moving tree line to a real estate boom. “It’s really a large area that's now climatically available, and the first one there can really define what that forest is going to look like going forward,” he says.