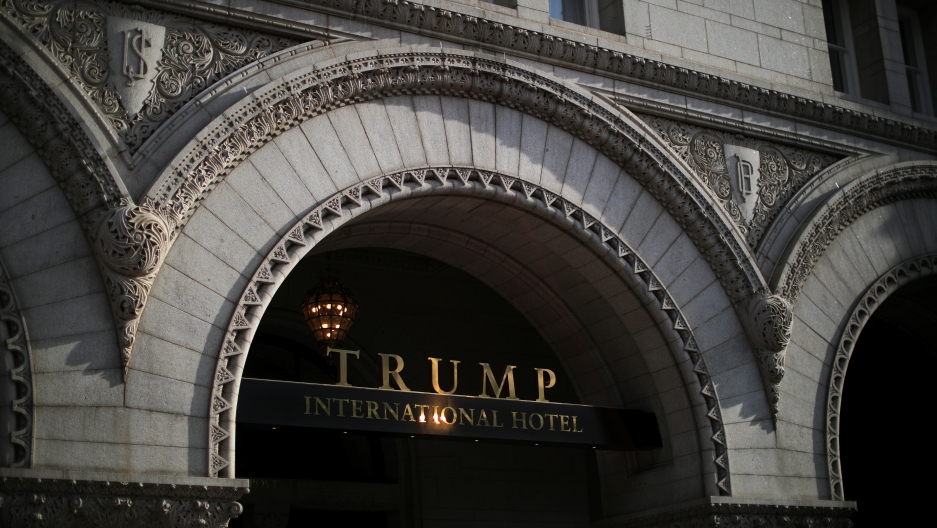 The entrance of Trump International Hotel is seen in downtown Washington, June 28, 2017.

Every federal employee knows the rule: You don't keep any valuable item given to you by a foreign government official. When my former boss, Mike Mullen, retired as chairman of the Joint Chiefs of Staff, his French counterpart brought a thoughtful gift: an 18th century engraving of the British surrender at Yorktown that he and his wife found on a weekend in Normandy.

It, and dozens of other presents Mullen received that day, are property of the United States. Unless Congress expressly approved, or he bought it back at market value, Mullen could not keep any of them.

This is a hard-and-fast rule, enshrined in the Constitution, that President Donald Trump is accused of violating in a suit that opened last week in US Federal District Court. Citizens for Responsibility and Ethics in Washington (CREW) v. Trump alleges that, when foreign officials rent rooms in Trump Organization properties in the US, or when Trump projects overseas win favors from host-country governments, that rule is broken. The Emoluments Clause is written in sweeping terms and covers any item of value, even immaterial things such as titles.

This part of the Constitution was central to the new form of government the US was creating. It was part of an obsession with ensuring that public officials had no divided loyalties, that they answered only to the citizens they were elected or appointed to serve. The founders didn’t need modern social science research to know receiving gifts or favors makes people feel a sense of obligation. So even perfectly innocent gifts, like that beautiful engraving, were banned.

CREW’s complaint focuses on foreign officials’ patronage of Trump establishments in the US. But having studied and worked against corruption in developing countries for much of the past decade, I am equally troubled by what is happening overseas.

My research suggests that in countries like Panama, the Philippines or Indonesia — where Trump-branded complexes rise above skylines or tropical forests — corruption can’t be understood merely as a collection of isolated cases of graft. It is the system by which sophisticated networks divert the country’s main revenue streams into their members’ pockets.

Those networks weave together top businessmen and government officials, often out-and-out criminals, too. Constant exchanges bind members together. Crooked laws in return for shares of the companies they benefit, for example. Impunity in return for a cut of protection money extorted from terrified slum-dwellers.

In my experience, it is almost impossible to do business in certain sectors in such countries — especially banking, energy and luxury real estate — without becoming entangled with these networks. And indeed, in China, Indonesia, Panama, the Philippines and the United Arab Emirates, among other countries, the Trump Organization has obtained a waiver of environmental laws and regulations to allow building in irreplaceable natural environments, special-purpose infrastructure provided by the government, licensing and other items of significant value.

But even assuming Trump is getting such goodies, what difference should it make to Americans?

In my view, such favors — and the business entanglements that go with them — put Americans and our system of government at risk. First, such exchanges will cloud the president’s judgment. How are citizens to know whether his frequent meetings with Philippine President Rodrigo Duterte, famous for a vicious anti-drug crackdown and for insulting President Barack Obama, are dictated by American national interest, or by business interests? Whose interest will be served in trade negotiations with China, or when the US takes sides in the dispute between Persian Gulf kingdoms? American people’s interest? Or that of his business partners or the governments from which the Trump Organization needs permits or protections?

Second, high-level US friendships with abusive governments endanger us physically. As I explain in my 2015 book "Thieves of State: Why Corruption Threatens Global Security," corruption is angering people all over the world. If the president of the United States is in business with corrupt leaders and their cronies, their practices are validated; they grow stronger. And their victims grow more indignant. This indignation has pushed some into the arms of terrorist groups; it was at the root of revolutions across the Arab world and in Ukraine. It has fueled protests from Brazil to Lebanon and Romania to South Korea, toppling several governments. Not unreasonably, if people think the US is enabling their abusive leaders, they may lash out at Americans.

But most importantly, I am concerned that — with the president of the United States providing his stamp of approval — the behavior common in kleptocratic countries may come to seem normal here, too. And that would be the end of the principles on which this country is based. Our government isn't supposed to exist to serve the interests of a small coterie of top business executives. Government contracts are not supposed to go to companies run by close relations of government officials. Our courts aren't supposed to be repurposed as instruments that guarantee immunity to network members while punishing rivals or those who challenge a rigged system. Officials aren't supposed to have gangs of thugs who can intimidate opponents.

That’s how a lot of the countries I study operate — a lot of them countries where the Trump Organization does business. Signs of such practices are already beginning to appear in the US.

Americans are, of course, aware — sometimes painfully aware — that the United States has never conformed to its own ideals. But there is no reason we should not hold our government up to those high standards. That's why the CREW case is so important.

And that's why it's critical for the public to get into this fight. If we don’t demand clean government, we won’t get it. And that objective is too important to become just another partisan stick to beat the other guys with in a quest for power. Voters must hold their own side up to scrutiny. Charitable foundations, for example, are a vehicle I have seen corrupt leaders from Tunisia to Uzbekistan use to siphon money from citizens and foreign donors. Hillary Clinton’s ongoing connection to the Clinton Foundation while she was secretary of state may have been legal, but it was unacceptable and should have drawn protests from Democrats.

And Americans must understand how resilient a structure a network is. As satisfying as it can be to see a venal leader toppled — Hosni Mubarak, say, or Viktor Yanukovich — corrupt networks have too often rebounded. One way they do so is by activating identity divides to pit the population against itself.

Americans must join forces across political and cultural divides to develop and demand the institutional reforms that will ensure our government serves us, the people, not a high-rolling network around our top officials.