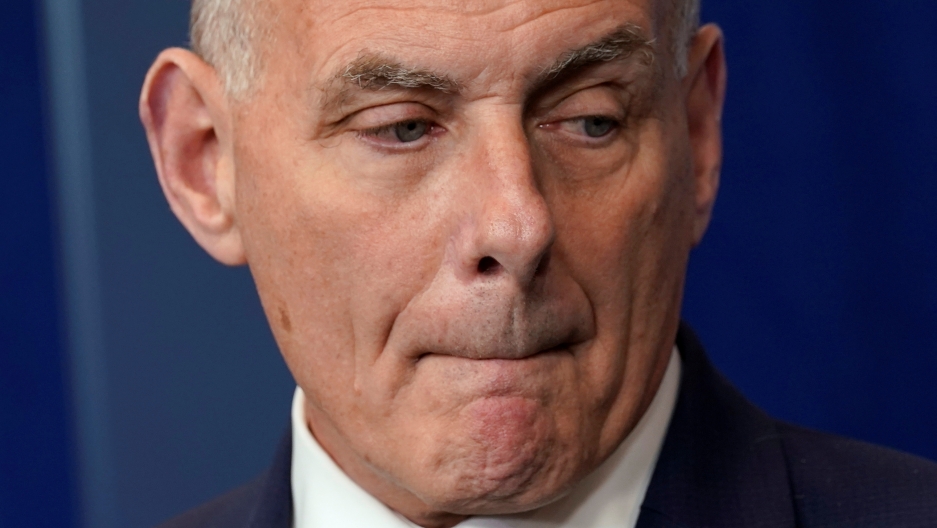 White House Chief of Staff John Kelly pauses during the daily briefing at the White House in Washington.

The controversy surrounding four fallen US soldiers in Niger shows no signs of winding down.

Neither does the debate about retired Marine Gen. John Kelly's remarks in the aftermath of the tragedy.

White House Press Secretary Sarah Huckabee Sanders did little to quell the row Friday, when she admonished CBS reporter Chip Reid, telling him, "If you want to get into a debate with a four-star Marine general, I think that's something that's highly inappropriate."

"[Gen.] Kelly, first of all, is no longer an active duty officer," Bacevich notes. "But more importantly, I think, he has opted to become a political figure. Generally speaking, we like to think that the military is apolitical and nonpartisan, but that description does not apply to the person who is the White House chief of staff."

The historian and professor emeritus at Boston University sees Sanders' statement as proof of a widening gap between the US military and the broader society that's emerged as an unanticipated consequence of the end of the military draft after the Vietnam War.

"There's been a tendency to elevate the status of the military, generally, and in particular, the status of very senior officers and put them on some sort of a pedestal, as if they are above the rest of us mere citizens," he says. "That's what we heard the president's press secretary articulate."

Bacevich's son, whose name was also Andrew, was an army lieutenant. He was killed in Iraq in 2007.

Listen to the full story above for more on Bacevich's perspective on the US military's role in the White House and for his thoughts on presidential condolence calls.