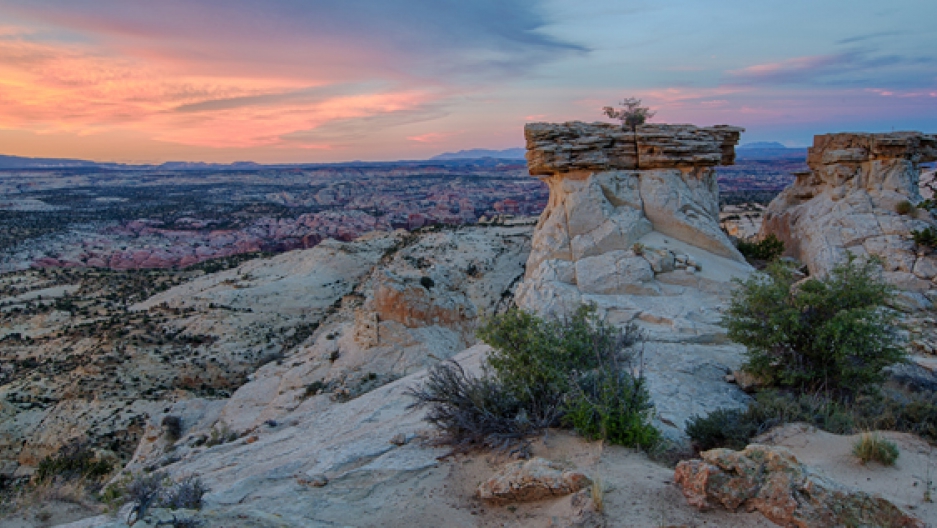 The sun sets on the Grand Staircase-Escalante National Monument in southern Utah. The site is one of many that Interior Secretary Ryan Zinke has recommended shrinking in a leaked memo to President Donald Trump.

Bureau of Land Management/Flickr CC BY 2.0

Following a four-month review of more than two dozen national monuments, Secretary of the Interior Ryan Zinke submitted confidential recommendations to the Trump administration in August. A leaked report reveals that Zinke proposes to shrink a number of monuments and open some of them to extractive industries like mining, grazing and fishing.

Presidents can create a national monument out of federal land with the stroke of a pen, thanks to the 1906 Antiquities Act, but a law passed in 1976 gives Congress the sole power to revise or eliminate national monuments, so it’s unclear how or when — or if — these recommendations will be implemented, says Hillary Hoffmann, an environmental law professor at Vermont Law School.

What’s more, Hoffmann adds, local public support in almost every area near the targeted monuments has strongly favored keeping the designations as they are.

“When Secretary Zinke put forth this review period for the national monuments that are currently under review, … the overwhelming majority of public support was to keep the monuments … at their current size and scope, and not to touch the designations of the previous executives,” Hoffmann says.

Opposition to current monument designations has come primarily from those who favor extractive industries, like mining and grazing, particularly for the land-based monuments, Hoffmann notes.

Local opponents often describe existing monuments as “federal land grabs,” which, Hoffmann says, leads some in the local communities to feel that “the federal government [is] overreaching its authority and ‘stealing land,’ if you will, that locals have always had access to and been able to use.”

But this notion is “somewhat problematic for a couple of different reasons,” Hoffmann says. For one, a national monument can only be established on land that is already federally owned. A monument designation only increases the land’s level of protection.

Secondly, national monuments “absolutely preserve access. Local communities can still access these public lands and use them after the national monument designation is in place,” she explains. “It’s just that the management is going to be a little bit more careful.”

What bothers most of the locals who oppose monument designations on public lands is that they limit the money to be made by extracting mineral resources from them, Hoffmann says. But there are holes in this argument, too: “There might be limited job creation in the near term, but the federal government subsidizes those extraction programs so heavily that the American public isn't reimbursed for the cost of the fossil fuels that are extracted,” she explains.

In fact, economists who have studied national monuments and their impact on rural, western economies find they have a positive impact. As a result, many business owners and small towns in southern Utah, for example, favor and support the continued existence of their national monuments, because they bring in money, primarily through tourism.

Some national monument designations have also sought to address inequities faced by Native Americans, an idea that animated policy in the previous administration.

President Barack Obama recognized these ties when he established Bears Ears National Monument, which Hoffmann calls a “really a significant step forward in acknowledging the place of Native American nations in this country's history.”

“The public overwhelmingly supported the continued existence of all of the monuments that were subject to the secretary's review,” she says. “There will definitely be litigation. There are plenty of business alliances and organizations that will inevitably bring lawsuits challenging whatever actions President Trump decides to take.”