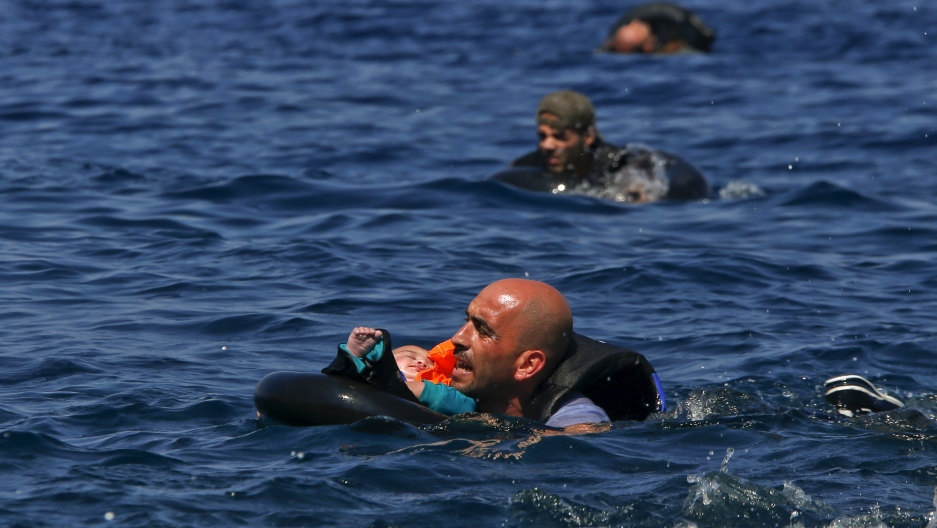 A Syrian refugee holding a baby in a life tube swims towards the shore after their dinghy deflated some 300 feet from the Greek island of Lesbos, Sept. 13, 2015.

Immigration experts are trying to get clarification of a new presidential directive on refugees. One issue of concern is language buried deep in the document about the need for refugees to be “assimilated.”

The presidential “determination” was issued on Sept. 27. Foreign Policy columnist Lauren Wolfe highlighted the issue in her recent piece, "The Trump administration wants refugees to fit in or stay out."

The previous language in refugee guidelines talked about the need for “integration” of refugees. That implies a joining of cultures, says Wolfe. “You can keep your own language and religion,” she says.

The new language of assimilation is causing concern as it implies the recent arrival is simply “absorbed into the mainstream culture,” adds Wolfe, and must surrender their own culture.

Refugee experts told Wolfe they have never seen the term “assimilation” before in official documents. But she says they have seen the word used a lot in the last couple of years in white supremacist blogs and private chatrooms.

Since the Refugee Convention of 1951, Wolfe adds, the international consensus has been that refugee status should be determined solely on humanitarian grounds, as they have “a well-founded fear of persecution” in their home countries.

The new measure says immigration authorities may consider “certain criteria that enhance a refugee’s likelihood of successful assimilation and contribution in the United States” in addition to humanitarian criteria.

There is no clarity about how the new directive will be implemented.

Supporters of the measure say fast and efficient assimilation is of benefit to the refugee. The directive states: “Successful assimilation of refugees into US society directly benefits refugees, asylees, and communities, while it also serves the national interest of the United States by helping to establish a safe and secure homeland.”

To hear more of Lauren Wolfe's thoughts on the Trump administration's new directive, listen to the segment above.