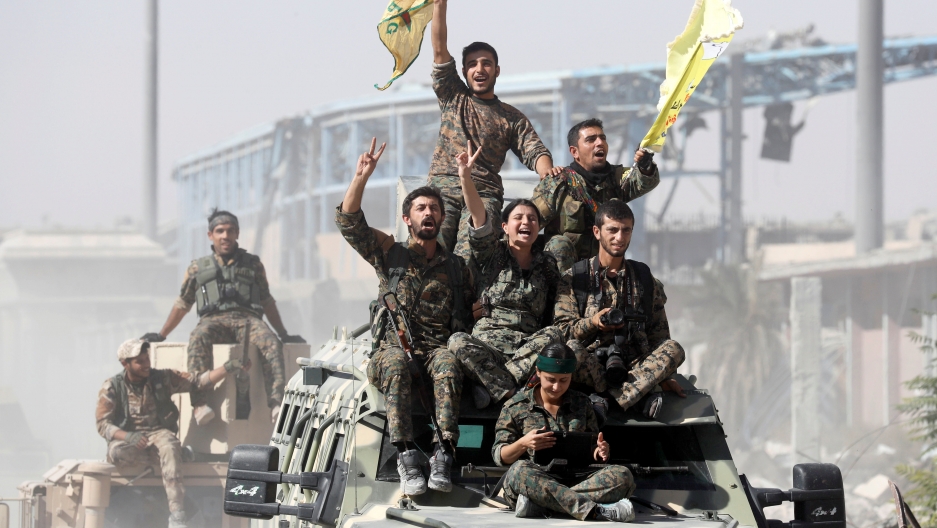 As they surrendered the city of Raqqa today, ISIS militants climbed onto 30 buses and 10 trucks for the ride out of town.

Some fighters even stopped to snap a couple of parting photos.

Then the extremists abandoned the city they'd considered the capital of their so-called caliphate. US-backed Kurdish and Arab militias now say they're "fully in control."

"There were big celebrations in the center of Raqqa where ISIS used to carry out executions," says The World's Rich Hall from his base in Beirut. "It's a very symbolic defeat for ISIS."

Many Raqqa residents welcomed the defeat of ISIS, but some are also wary of what lies ahead for the city.

Hall reached out to a former Raqqa resident and anti-ISIS activist who goes by his first name Mohamad and now lives in Europe.

"I don't believe that the city has been liberated today. It's just a new occupier taking the city," Mohamad says. "[The US-backed coalition] killed thousands of civilians by artillery and by the coalition airstrikes. They destroyed about 80 percent of the city. They want to capture this city no matter the cost."

The loss of Mosul in July and now, Raqqa, has crippled ISIS, limiting the group's ability to collect taxes from large urban populations and take over factories and oil fields.

"They're losing this source of income, so they're a weakened organization," says Hall, adding, "but they're still a threat."

To hear more of what Hall learned about Raqqa, listen to the audio, above.