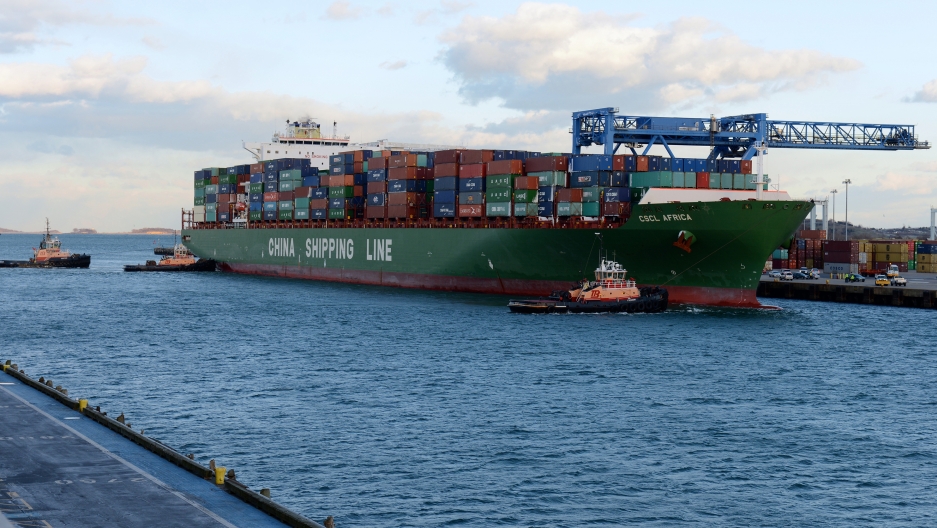 A ship docked at the Port of Boston, New England’s busiest container port.

Modern shipping containers are a bit like Legos — you can take them off a ship and snap them perfectly onto a truck or train. This relatively simple innovation, which started in the 1950s, has allowed global trade to go gangbusters.

“It was in 1992 when 100 million containers moved through all the world’s ports, then in 1998, we went to 200 million,” said Stephen Flynn, founding director of the Global Resilience Institute at Northeastern University in Boston. “Roughly we’re at a little over 600 million today.

“So just between the events of 9/11 and the events of today, you almost have a three-fold [increase] of volume moving through the world’s ports.”

Container shipping is a big part of the reason why, when we visit the grocery store, fresh apples, avocados and bananas are all available 365 days a year. Yes, there are environmental and social costs to having pretty much anything we want on demand, shipped from across the planet. But let’s leave that debate for another day and focus on what made the global trade dance possible: container ships.

The Port of Boston is New England’s busiest container port and has been seeing record volumes year after year. (Boston is still tiny compared with major US ports like Long Beach in California, New Orleans, or New York and New Jersey.) After a recent expansion of the Panama Canal to allow larger container ships to pass through, the vessels North American ports are seeing have become massive.

And the ships being built are only getting bigger. Much bigger.

“What that means is ports like the Port of Boston, as well as ports across the East Coast, are having to invest to dredge their harbors and put in new, larger cranes and deeper berths to handle these vessels and all of the cargo that’s coming with them,” said Wieland.

The port is in the middle of a roughly $350 million state and federally funded multi-phase expansion, with work performed by the US Army Corps of Engineers.

It’s a wise investment, said Rockford Weitz, director of the Maritime Studies Program at the Fletcher School at Tufts University. Weitz explained that container shipping has become so efficient, it’s often cheaper to move items halfway across the world by ship than 50 miles by truck.

“It’s cheaper in Boston to send the container from China through either the Suez Canal or the Panama Canal, occasionally around the Cape of Good Hope. They come to Boston — in any scenario that is cheaper than then shipping it to Vermont from Boston by truck,” Weitz said.

Shipping containers are part of the reason we can get flat screen TVs for a few hundred dollars. Again, yes, there are downsides to globalization, including hurting lots of local manufacturing across America.

Flynn said our modern shipping was developed with two goals: to be cheap and efficient. He said a challenge now is to make it more secure.

“The amount of materials that are out there, and dangerous actors who want access to these materials, has only grown,” said Flynn.

At the Port of Boston, about 600 trucks pass in and out each day. As they exit, each truck must drive between two yellow poles. 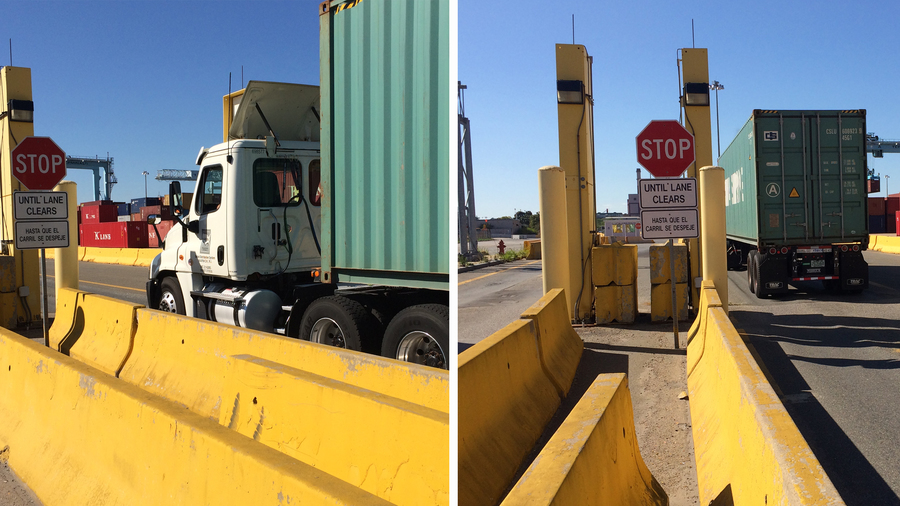 A truck exiting the Port of Boston passes through a radiation portal monitor.

“As you see this truck coming at us, he’ll slow down to about 5 mph and we’ll do a full scan of his truck,” said Shawn Fayles, the US Customs and Border Protection watch commander in Boston.

In the span of about a minute, three trucks are scanned for radioactive material.

“That’s about as fast as the exam is, so as you can see, it really does keep the flow going,” said Fayles.

This protocol is standard at all US maritime ports. If radiation were to be detected, the container would undergo further testing before it could leave the port. Trucks can also be X-rayed, kind of like a huge piece of luggage at an airport.

Port Director Lisa Wieland explained that tomorrow’s scanning technologies are only getting better: “You can actually tell the difference between a Coke and a Diet Coke in the box, and you can also detect exactly where that is in the container.”

The technology, which is still in the testing phase, isn’t reading the label — it can differentiate between sugar and artificial sweetener.

But Weitz said we could go much further to increase our safety.

The major threat isn’t a dirty bomb passing through the port of Boston, the fear is that it could go off at a port. That could put port employees and people nearby at risk, potentially disrupting our entire way of life.

“What will happen is not just a local incident, the response to the incident will almost certainly be: Wait, we’ve got to check all the other boxes so they don’t pose a risk,” said Flynn.

“And that process of trying to do that post an event will cause cascading, essentially, backups across the global system that would take weeks to sort out. So it’s a case of not mass loss of life. It’s not a case of mass destruction; it’s really a story of mass disruption.”

Flynn has testified before Congress 33 times about maritime safety and has argued that we need to do a better job knowing what’s in our containers before they arrive at our ports. The US Department of Homeland Security does have a lot of that information, but Flynn has said that there are still too many points of vulnerability in the system overseas.

Flynn argued that the world’s largest shipping companies, based in Asia and Europe, need to work more with governments and ports. By his estimation, for $10 to $15 a container, we could all be much safer. (That cost would likely be passed along to consumers.)

As ports like Boston continue to expand, Flynn called that an “incredibly cheap” investment in security, and something we just need to do.