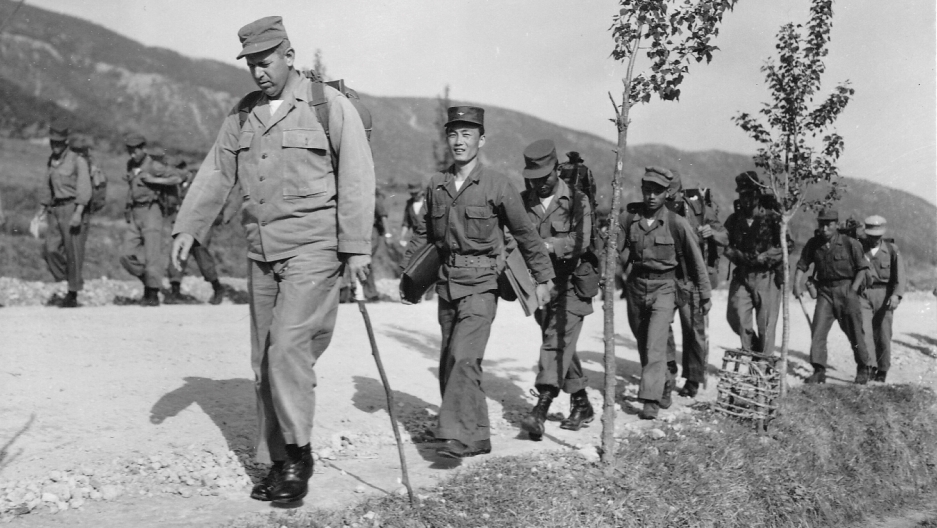 US Air Force intelligence officer, Donald Nichols ran a covert network of spies who infiltrated North Korea and fed information back to Nichols' headquarters in South Korea. He trained and deployed hundreds of agents, many of whom were sent on suicide missions to the North.

US Air Force/Courtesy of Blaine Harden

The shelling started on Sunday morning, before sunrise. It was June 25, 1950. A couple of hours later, dozens of Soviet-made, state-of-the-art battle tanks from the Korean People’s Army — along with about 90,000 troops — began moving across the 38th parallel to attack South Korea.

Suddenly, the Cold War had turned into a full-blown shooting war.

A day later, from his base in Tokyo, General Douglas MacArthur sent a bleak assessment of the situation in Korea back to Washington.

MacArthur would later tell Congress that there had been no possible way to predict the North Korean surprise attack ahead of time.

But there was a pretty simple way. If only the general had bothered to read some of the intelligence reports written by a young US Air Force intelligence officer in Korea named Donald Nichols.

“Nichols’ hair had been on fire for a year,” says Blaine Harden, author a new book about Nichols called, “King of Spies: The Dark Reign of America’s Spymaster in Korea.”

Nichols had arrived in Korea four full years before the war kicked off. 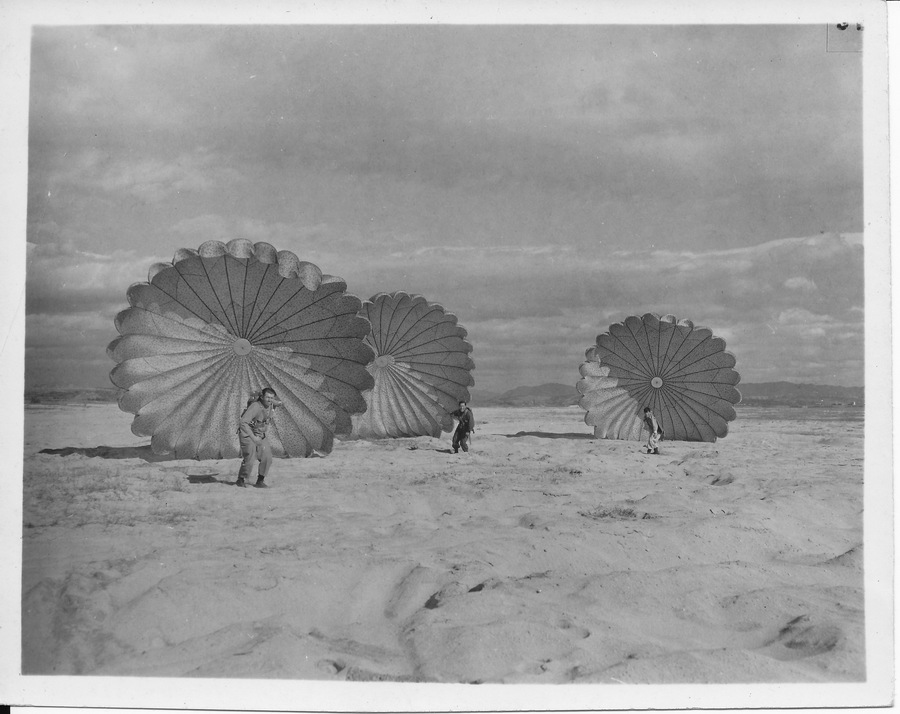 Nichols was in his mid-20s when he arrived in Korea soon after the end of World War II. He made powerful friends in the South Korean military and political establishment, and built up his own personal network of spies and was allowed to operate virtually unchecked.

“The intelligence sources that [Nichols] had in North Korea had been telling him that the Russians had been shipping in planes, artillery and lots and lots of ammunition and guns,” Harden says.

But Nichols was not fired. And his intelligence reports were not ignored for long.

In the first few weeks of the war, US and South Korean military forces suffered big losses as they made a chaotic retreat to the southeast corner of the peninsula, outside of the port city of Busan. They needed every possible advantage to stave off a quick and total defeat.

North Korean forces vastly outnumbered the Americans and their allies, and the KPA might have delivered a knock-out blow if it hadn’t been for the work of Don Nichols.

Nichols ran a team of codebreakers led by a North Korean defector, Harden says. Prior to the war, the defector had moved to the south, and brought North Korean army battle codes with him.

Harden writes about how Nichols and his team used those codes to relay information from intercepted North Korean radio transmissions in real-time to the US Eighth Army, which was surrounded and fighting for survival.

“Whenever the North Koreans were going to make an incursion on the perimeter to try to really kill off the Americans, the Eighth Army could prepare and they rebuffed these incursions until the Americans could bring enough forces into the theater of that war,” Harden says.

“But for those few weeks, Nichols and the intelligence he was delivering were absolutely crucial to the war effort.”

And Nichols was just getting started. 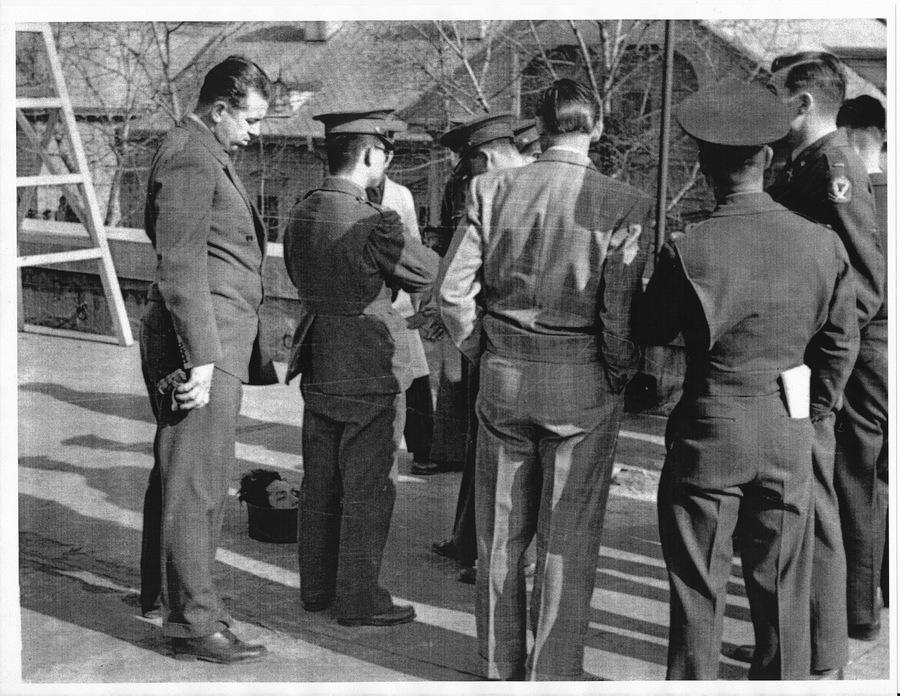 Nichols is seen here (far left) standing above severed human head, alongside unidentified US and South Korean officials in Seoul. Severed heads of Communist guerilla leaders were often sent to the South Korean capital to show progress in the civil war, Harden writes. "I have seen these things," Nichols said.

The old newsreels put out by the US military mention the American bombing campaign against North Korea, but they don’t begin to describe the extent of the death and destruction brought down on the North by the US Air Force.

In large part, the bombing campaign was made possible by Nichols and his network of spies.

Harden says American bombers got to work quickly after the start of hostilities, systematically destroying the cities of North Korea. The bombing went on for three years, destroying 85 percent of the buildings and killing between 1 and 2 million civilians.

Throughout the war, Nichols ran an extensive network of spies, many of them defectors from the north. They fed Nichols information, including bombing targets inside North Korea.

By the time the war began, Nichols had learned the Korean language and made powerful friends in the South Korean military and political establishment, including President Syngman Rhee. Harden says Nichols was both shrewd and ruthless, and he grew into a real-life version of Colonel Kurtz from the film, “Apocalypse Now.”

“He became increasingly free to do as he wished,” says Harden. He adds that Nichols went off the deep end with his personal behavior.

“[Nichols] threw people out of airplanes, pushed them out of boats. He had a shootout with some of his own intelligence people, who were reluctant to go to North Korea because they kept dying.”

Nichols shot several of his own men in his own headquarters but the incident was never officially reported.

Harden says Nichols was praised by some of his generals as "invaluable," as "the best asset in the field," and “a one-man war.” But after the war, US military and government officials decided that something needed to be done about Nichols.

“In the summer of 1957, US Air Force [military police] came for Nichols in the middle of the night and, according to an eye witness, put him in a straightjacket,” Harden says.

“He was given months of electroshock and he told his family at the time that the US Air Force was trying to destroy his memory,” he says. “They didn’t destroy his memory, because he ended up living for another 30 years. But they did destroy his credibility and they erased him as an important actor in the war.”

Officially, Harden says Nichols became a footnote in the US military’s telling of the Korean War. But he was far more than that, dark side and all. Harden’s book fills in a lot of the gaps about this middle-school dropout who would eventually become to be known to the North Koreans as, “the king of US spies.”

Harden quotes one of Nichols’ own commanders saying that this was someone you wanted on your side during a time of war, but after the war was over, you needed to put him jail.