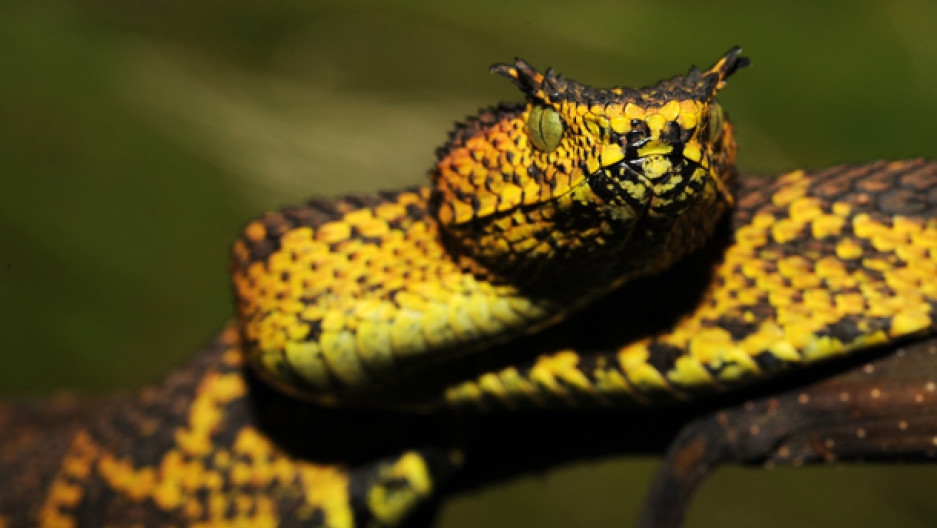 Matilda’s horned viper is a newly discovered snake species with a small natural range that leaves it vulnerable to poachers.

The growth of data publicly available on the internet has been a boon for biological science and conservation. But it is also being used by poachers and dishonest collectors to locate rare plants and animals and sell them illegally for a hefty price.

This situation presents researchers and the public with a quandary: How to find a middle ground that preserves the spirit of scientific discovery while protecting at-risk species.

In other words, if you are in the woods of the southeastern United States and think you’ve found an ivory-billed woodpecker, which has been thought to be extinct since the 1940s, you may not want to post that information on eBird, says Adam Welz. He's a South African writer, photographer and filmmaker, who recently published an investigation on this topic in collaboration with Yale E360.

Instead, if you find something truly special, “you should give the information to somebody of great credibility, somebody perhaps who works for a well-established organization, who is in the public eye,” Welz recommends. But, he adds, we must “keep an eye on them, too, because some of the most professional poachers and smugglers are experts in their field [or] university professors.”

Then there are the international traders. They don't necessarily know as much as the specialists, but they move around the world picking up animals, to order, for their clients. These clients are often collectors interested in a particular group of species.

“The third crowd in this game are the criminal syndicates,” Welz says. “These are the seriously organized criminals who are often dealing all kinds of other things. They're dealing illegal drugs [and] guns, they're in human trafficking — and they're dealing endangered species as well, because that is just another way of making money.”

All of these groups use publicly available geospatial data to locate and steal rare and endangered species.

No can pinpoint a specific time at which this problem arose, Welz says. As the internet and online databases have grown, people have begun to see the potential of sharing data, either formally within the scientific community or informally among ordinary people on social media.

It’s a problem that has built up over time and has created many different streams of information.

“There is data that has been acquired by scientists using interesting tracking devices [and] these types of tracking technologies have become more and more sophisticated,” Welz explains. “Today, we can literally track tiny little honeybees with tiny little electronic tags, [and] we can track blue whales with satellite tags. … You can implant a tiny little transmitter in a snake that will not only tell you where the snake is, it will tell you what temperature the snake is at. It will tell you, perhaps, the altitude of the snake. All this technology is exploding, and it's being adopted very rapidly because it gives biologists and conservationists such incredibly useful data.”

According to Welz, biologists are extremely divided about what to do, because the geospatial data is extraordinarily valuable to science and to conservation.

“We're able to do the most incredible stuff with this data, and the whole of science rests upon transparency,” he says. “The entire scientific endeavor is based on the idea of transparency; on the idea that I can replicate the results you claim to have found in your study and your experiment. As soon as data starts being suppressed and starts being hidden and starts being held back, it can cause damage to the core of what we're trying to do when we do biological science.”

On the other hand, it is “absolutely, blatantly obvious to everybody that criminals are using this data, and there is also some evidence that holding the data back works.”

For example, he says, scientists working with the Wildlife Conservation Society in Tanzania discovered a new species of viper, a “very attractive little black-and-yellow snake, which was only found in a very small forest patch in that country.” The scientists published the snake’s formal scientific description without divulging its location. “I've just checked in with those guys and they say there's absolutely no evidence that the poachers have actually found this species yet,” Welz says.