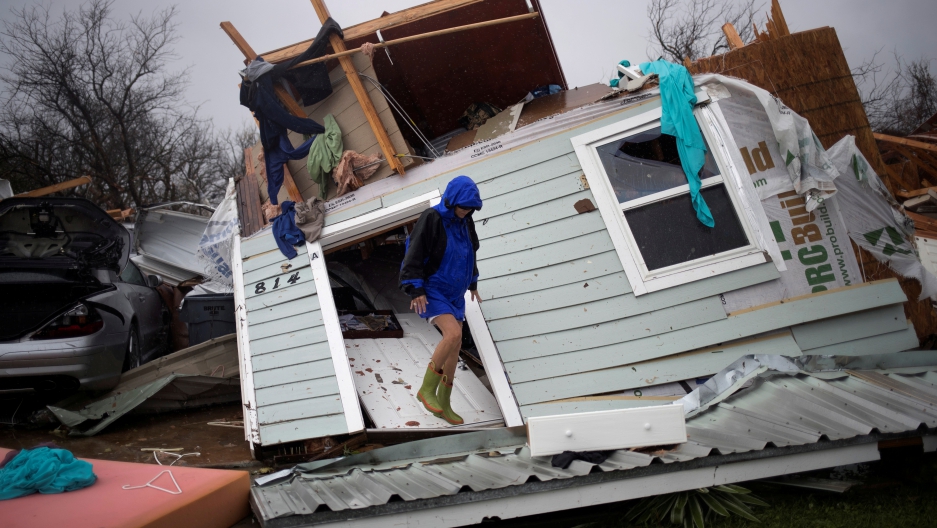 Experts say that after the devastation comes the rebuilding crews. And that's when traffickers see their opportunity.

The Caribbean and the American South are struggling to recover in the aftermath of devastating hurricanes. Food has to be delivered, houses rebuilt, roads cleared and electricity restored. But for law enforcement, there’s another concern after a place gets pummeled by a natural disaster: It becomes ripe grounds for human trafficking.

“Pretty girls wanting to make some quick money, and recover losses from Harvey,” read an online ad in Houston, recently — one of many mentioning the hurricane. 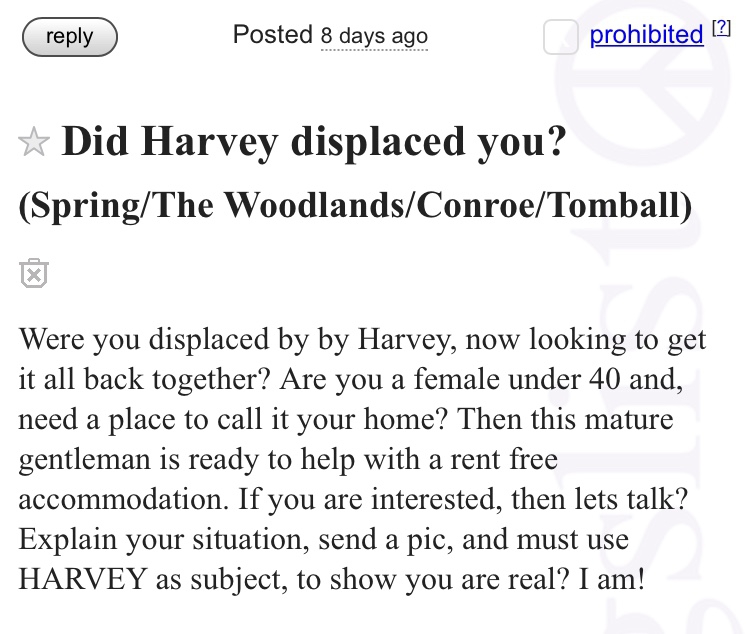 An online ad, posted a few days after Hurricane Harvey.

Allison Franklin knows all about the world of sex trafficking.

“I was gang-trafficked over here,” she says, pointing to a rundown motel. “Majority of the Crips run this area. There’s a few Bloods a little further north.”

These days, Franklin is an advocate for victims of trafficking.

Tonight, we’re driving around Houston, right after Hurricane Harvey. Her car is creaky and she drives with a window open, letting the hot breeze in. These are the streets where she herself was once sold and bought.

“These cheap motels, these are hotbeds for trafficking and prostitution. I lived in this hotel for about three years,” she says.

In the darkness, under a yellow street light, a very young woman in a baggy dress looks out at nothing in particular. On the next corner, another girl. And another one. And another one. Waiting to get picked up. 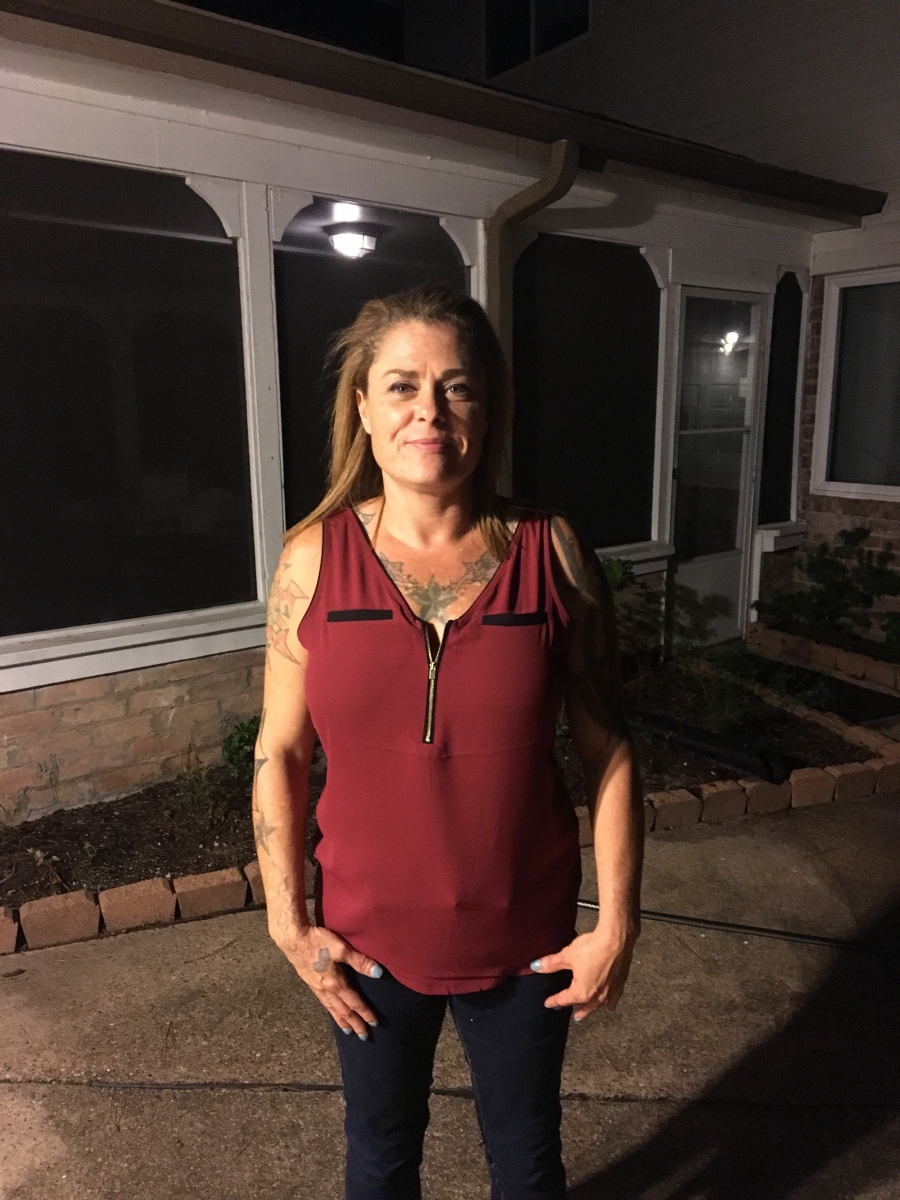 Allison Franklin is an advocate for victims of human trafficking.

A lot of these girls, Franklin says, are trafficked by the gangs that rule this area. Just like she was.

She remembers working around 2006, when women started showing up from New Orleans after Hurricane Katrina. “So many individuals flooded just this area alone, that I know of. They were homeless. They had no money. They had no place to live. And so, you’re not left with that many options when you are in that situation.”

It’s difficult to put numbers on an underground industry like sex trafficking. But we do know, it’s a trade that moves millions of dollars every year.

“I was chair of Small Business Committee for Congress,” she says in a phone interview. “A market is a market. And if someone is going to pay good money, lots of money, somebody else is going to bring a product to that market, and unfortunately a national or international kind of natural disaster like we’ve seen, especially in the hurricanes, will bring a market. Just because of market principles.”

Thousands of mostly male aid workers pour in to rebuild a city, the former legislator explains, and are met by a population that has just lost everything.

The first time Smith says she came into contact with these cases was after natural disasters in Asia.

But she encountered them in the US, too.

She says she noticed “girls who had been trafficked by a major trafficking ring, across the upper part of the country, but they were dropping into the Katrina area. Now what shocked me when I talked to some of the girls, they were like ‘well yeah. That’s where you go. That’s where there's a lot of buyers.’"

And it wasn’t just women from other states. Local women were being sold too. “Local is your vulnerable population for domestic trafficking,” Smith says. “It can be your foster kid, or your runaway kid, who ran away — and we know they’re out there. And now they are more destabilized. It makes them ripe for the picking.”

Before the hurricane, the Houston police were concerned enough to speak throughout communities about the dangers of trafficking after a disaster. Back in the car, Franklin says she’s still worried about the same dynamics.

“One of those guys is a pimp,” she says, pointing to a group of men, hanging out under the pulsating light of a gas station. Her former pimp is probably out here somewhere too. She’s seen him around. “Bottom-feeder pimps. They sit out there on that corner, and wait for the women to come back with money, and then give them drugs, and send them back out again.”

But this is the lowest rung of the ladder — the bottom of the barrel. Franklin remembers working out here, when something changed. The internet. She remembers her own trafficker started moving girls off the street. She says the internet is a sex trafficker’s dream come true. “It lowered the risks of the trafficker or the women getting caught.” 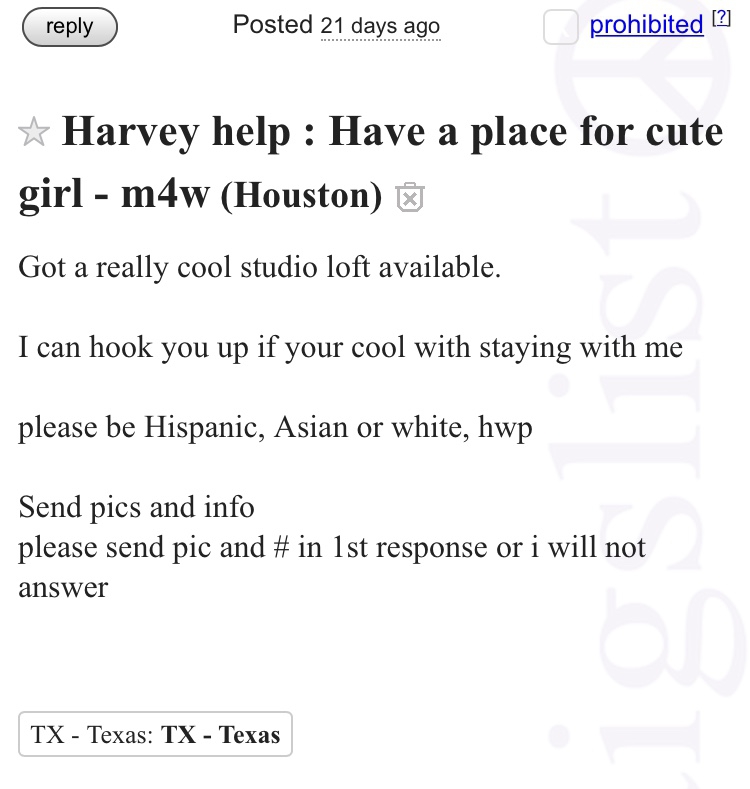 An online advertisement from Houston.

And think about it in this disaster context: Your life was upended by a hurricane. Maybe you lost your home, your car. But you probably still have your phone. You may still be going online.

Franklin consults for a Texas nonprofit called Children At Risk. They did a study recently and found that adult ads on online sites doubled after the Hurricane Harvey.

Adult ads don’t necessarily equal trafficking. And plenty of people choose to be sex workers. Still, it’s hard not to cringe at the ones that imply sex in exchange for shelter after the hurricane.

When I get back to my hotel, I go online and check out some of those ads again. When everything has been lost, “choice” become a vague term.

If you lost your house, one man offers a place to stay. He’ll take care of you.

If you’re hispanic, Asian, or white.

Are they genuine offers for willing participants? Or traffickers, sweet-talking the most vulnerable?

All you have to do to find out, is hit reply.