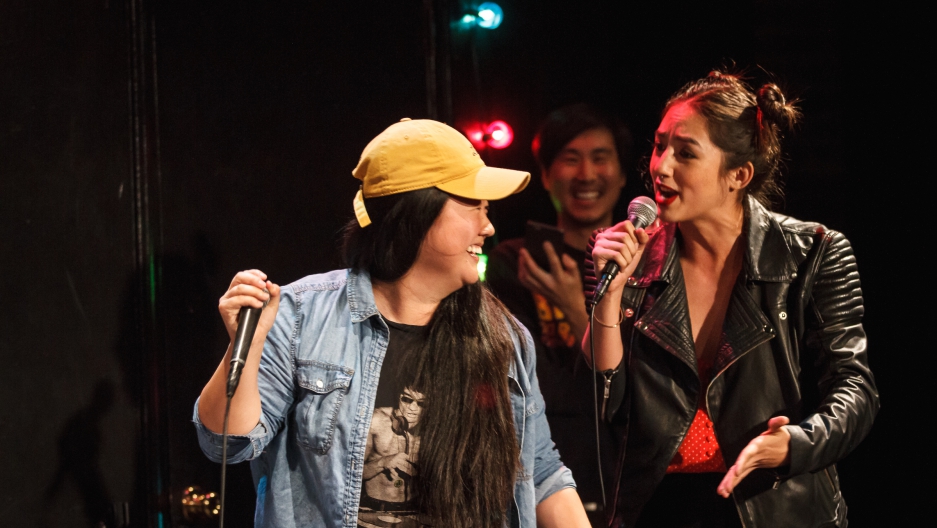 Andi Hester (right) responds to her rap battle opponent Sherry Cola (left), who compared her hairstyle to xiao long baos or soup dumplings and said she looked like Sailor Moon.

Comedian Sherry Cola, representing “Team Rabbit,” eyed her opponent for her first one-on-one rap battle. She had 30 seconds to take down actress Andi Hester of “Team Elephant,” who Cola noticed was wearing her hair in two pigtail buns.

“Are you half Asian?” Cola asked. Hester nodded, as the beat started.

“You’re only half Asian, but I don’t know how,” Cola began rapping, “‘cause on top of her head, she’s rockin’ some xiao long baos.”

“I am Whole Foods, fresh and pricey,” Hester would later retort. “You are Food For Less, free parking but dicey.”

Their rhymes didn’t always make a lot of sense and sometimes the performers stumbled over their words. But the audience cheered loudly through Sailor Moon references, failed math jokes and other silly backhanded compliments. 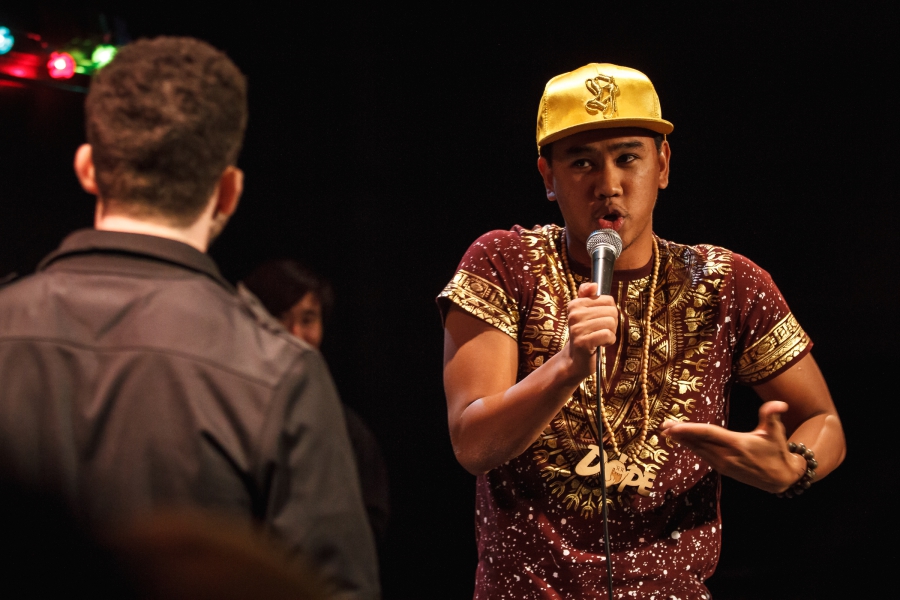 Welcome to a night of "An Autumn Moon Rap Battle" in Los Angeles, where (mostly) Asian American performers face each other for a comedic and lyrical smackdown. Experienced freestyle comedy rappers and first-timers take the stage together to celebrate a bunch of Asian harvest holidays, which all take place in and around October.

The holidays include the Mid-Autumn Festival, also known as the Harvest Moon Festival, celebrated in Chinese and Vietnamese cultures; Korea’s Chuseok or Autumn Eve harvest festival; Japan’s Tsukimi or moon-viewing festival; and Diwali, the Hindu festival of lights, which is an official holiday all over south and southeast Asia.

Autumn Moon Rap Battle producer Andy Apuy remembers watching “Yo! MTV Raps,” the music station’s first hip-hop show, while growing up in Houston, Texas in the ‘90s. She later got into gangsta rap. Her immigrant family wasn’t sure what to make of it.

“It’s not that they [outright] discouraged it, but there was this strange, passive-aggressive idea that this was black music, that this wasn’t music for Chinese people,” says Apuy, who co-produced the first-ever Autumn Moon Rap Battle at Upright Citizen’s Brigade theater on Oct. 2 in Los Angeles. “But hip hop was what was in the zeitgeist at the time, and if you’re a rebellious kid and your parents are telling you not to be so obvious about your love for this stuff — even more reason to listen.”

In December 2016, Apuy was in the audience when Zora Bikangaga and Shaun Fisher, two members of the freestyle hip-hop improv team Dopetown 3000, hosted "A Kwanzaa Rap Battle" at the Upright Citizen's Brigade. It was their second year celebrating the weeklong African American holiday with a comedy rap show. 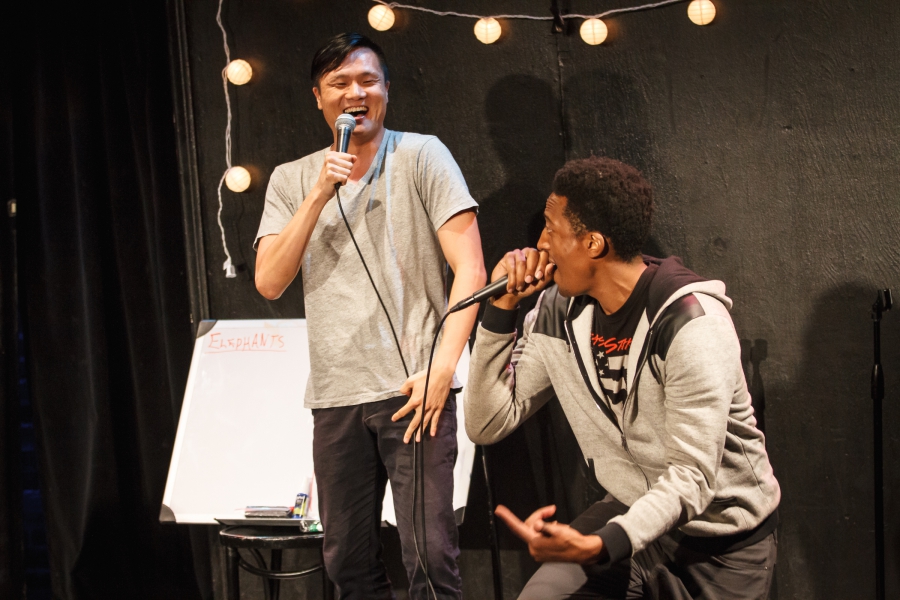 Chuck Maa (left) and Zora Bikangaga (right) are part of "Team Rabbit" at An Autumn Moon Rap Battle. Maa spits his rhymes in Chinese about representing b-boys, while Bikangaga raps about driving a Honda to the Asian celebration while "repping" Uganda.

The child of immigrants from Uganda, Bikangaga doesn’t celebrate Kwanzaa. But as the creator of the rap battle, he welcomed the opportunity to learn more about it. He traveled to Los Angeles’ African American Cultural Center, where Kwanzaa was founded in 1966 by Dr. Maulana Karenga, to do research and buy props for the show.

"A Kwanzaa Rap Battle" not only attracted diverse performers, one of Bikangaga’s explicit goals for the show, but also audience members of all ethnicities. There was an elderly Asian man in a three-piece suit named Voltaire who was recruited to be the final judge of the night. There was Keiko Agena, of the television series "Gilmore Girls," and Will Choi, who are the creators of Asian AF, an Asian American comedy showcase that has been regularly selling out at the Upright Citizen's Brigade.

“Rap battles are often associated with being negative, antagonistic, combative and belligerent, but I loved that [A Kwanzaa Rap Battle] was the complete opposite of that,” says Apuy, who is a writer for a television show and also a member of a group called 808 Hip Hop Improv. “It was celebratory, and I learned a lot about Kwanzaa. And I thought, ‘Hey, we have holidays too!’”

Apuy asked Asian AF and Dopetown 3000 to help her produce an Asian American version of the show. Even though Asian Americans aren’t known for freestyle rapping, she was convinced that, behind closed doors, there were other Asian Americans hip-hop fans like herself who had the skills but just hadn’t had the opportunity to showcase them. 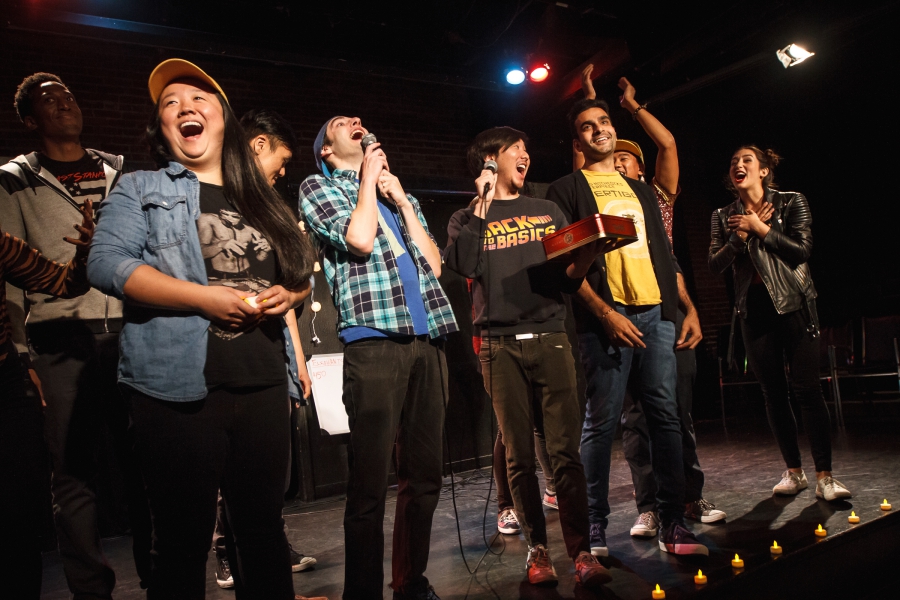 An Autumn Moon Rap Battle was born. The show alternates between one-on-one battles and group improv games prompted by audience suggestions and inspired by the improv comedy show “Whose Line Is It Anyway,” and Freestyle Love Supreme, the hip-hop improv comedy troupe Lin Manuel Miranda co-founded before he created the smash musical hit “Hamilton.”

Winners of each round are determined by audience applause. All the while, each team racks up points. Fisher, the host, routinely reminds both winners and losers that there is actually nothing at stake. That said, the winning team gets a tin of mooncakes, round Chinese pastries traditionally gifted and eaten during Mid-Autumn Festival.

“So much of rap to me is delivering punchlines,” says Bikangaga. “My favorite rappers are the funniest comedians, so when I learned about hip-hop comedy improv, it was like discovering two worlds that I loved were perfect together and could be very inclusive.

Bikangaga says for both the Kwanza and Autumn Moon Rap Battle shows, it’s about making sure that the performers respect freestyle rap as an artform and that they educate themselves about the cultural celebrations so that they can do them justice.

During the Kwanzaa Rap Battle, freestyle teams competed under the names Kujichagulia (self-determination) and Kuumba (creativity) — after two of the seven principles of Kwanzaa. Meanwhile, the Autumn Moon Rap Battle teams, the Rabbits versus the Elephants, refer to animal characters in Asian folklore and mythology. The Moon Rabbit is one of the Chinese moon goddess' only companions on the moon. The elephant refers to Ganesh, the elephant-headed god of wisdom, one of the deities celebrated on the main day of Diwali.

“Hopefully we can also give the audience some knowledge [about the holidays] so that they walk away with a little more respect and understanding of somebody who may be from a different culture and background,” says Fisher. 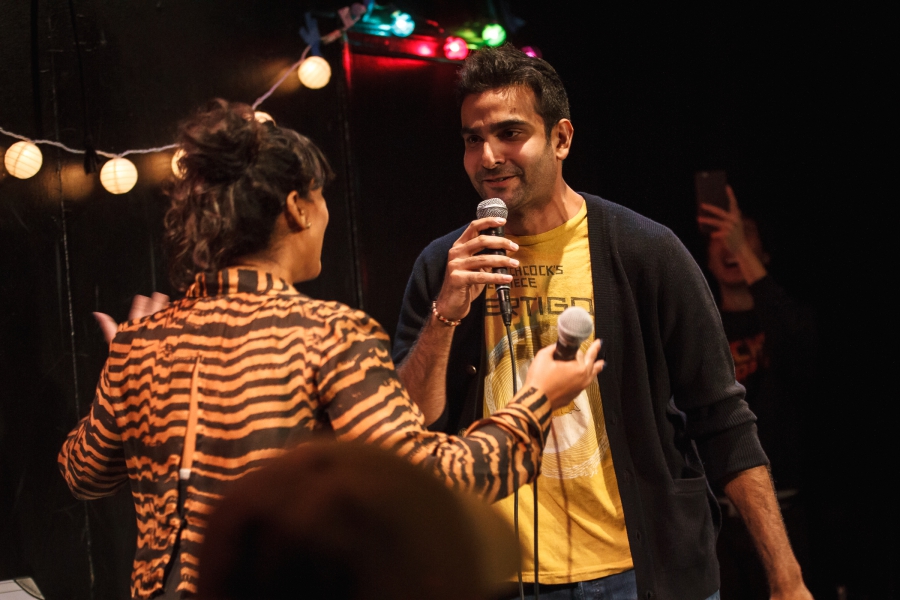 Dhruv Uday Singh goes up against Shilpa Das at An Autumn Moon Rap Battle on Oct. 2. During introductions, Singh rapped in Hindi.

Organizers say the show may be the first time audiences are seeing a group of Asian Americans participating in a hip-hop improv battle.

Apuy recalls the first time she saw a fellow Chinese American on BET’s Freestyle Fridays, MC Jin, and how much it meant to her to see someone who looked and sounded like her thriving in the freestyle rap scene. Nowadays, she points to a growing number of Asian Americans representing hip hop in mainstream culture, from writers Eddie Huang and Jeff Chang to artists Dumbfoundead and Far East Movement.

Also: Awkwafina is changing hip-hop one vulgar, hilarious lyric at a time

“I would love to produce a ‘Wild n’ Out’-style show with all the Asian American freestyle rappers that I admire,” says Apuy, referring to another sketch comedy and improv show on MTV, hosted by actor Nick Cannon. She has a long list of actors and rappers who would be part of that dream show.

"And Randall Park should host,” she says, of the “Fresh Off the Boat” sitcom star who used to rap with the group Ill Again. “He used to be on ‘Wild N' Out,’ you know?"