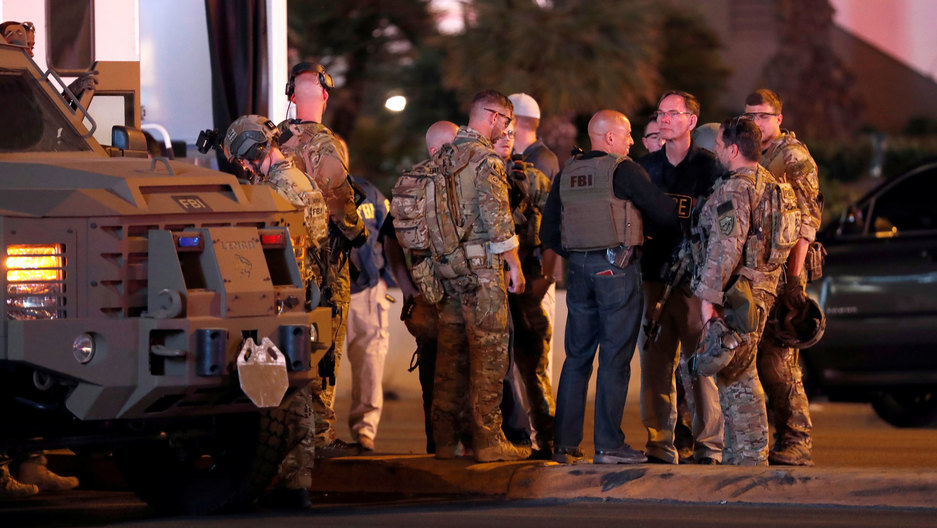 A group of FBI agents stand outside the Mandalay Bay Hotel in the wake of the Sunday night shooting that is now the deadliest mass shooting in America.

Within hours of the mass shooting in Las Vegas that killed more than 50 and wounded 500, ISIS claimed responsibility for the actions of shooter Stephen Paddock, a 64-year-old Mesquite, Nevada, resident.

News outlets picked up the story and later had to backtrack as terrorism experts began to point out that this incident lacks the usual hallmarks of ISIS-inspired terrorism: a young male perpetrator, a history of petty crime and signs of allegiance to ISIS on social media.

On Monday, Amaq, the propaganda news agency for ISIS, called Paddock a “soldier of the caliphate” and later published a more formal claim. But terrorism experts say this is likely ISIS's first false claim for an attack in the West. If it’s not, Paddock represents a wild outlier among those who have committed violence in the name of ISIS.

Rukmini Callimachi, who covers Islamic extremism for the New York Times, said she began to have doubts about the claim soon after it was posted.

“I Googled what was known about the shooter,” Callimachi said. “And as soon as I found out that he was a white male who was 64 years old, I started to question their claim.”

Studies have shown that ISIS recruits are typically young and male, with a criminal history.

“If this man turns out to be ISIS, he will not just be an outlier, he will be the oldest ISIS recruit in the US by nearly a decade,” Callimachi said.

Callimachi said there are several things that could be destabilizing the group, and leading it to make such a false claim. ISIS has lost significant ground in Iraq and Syria in the past year and Amaq, its news agency, has been the target of airstrikes.

“One working theory is that as they lose personnel, they’re getting sloppier,” Callimachi said.

In June, Rayan Meshaal, the founder of Amaq, was reportedly killed in an US-led airstrike. In July, a bus used as a mobile headquarters was targeted, killing four.

It’s also not unusual for ISIS to spread misinformation, said terrorism analyst Michael Smith II, who has served as an adviser to Congress, White House officails and the US House Homeland Security Committee.

“It is not without precedent for the Islamic State to issue boldly misleading statements about important events,” Smith said.

For example, ISIS claimed that US forces destroyed the al-Nuri mosque in Mosul. They’ve also inflated the amount of territory under ISIS rule.

“There is certainly a case to be made that much of the content of Islamic State propaganda is false information or obfuscatory information,” Smith said.

Even false claims can be part of ISIS’ strategy, he said.

“It serves to lead to civilians to question whether or not their government is being honest about something that may or may not have occurred,” Smith said.

In the past year, there have been at least two high-profile cases of false claims of responsibility by ISIS.

In June, ISIS claimed an attack by a gunman at a resort in Manila that officials later determined was not linked to terrorism. Then in September, ISIS claimed that bombs were planted in Charles de Gaulle airport in Paris, leading to evacuations. No bombs were found.

“[Throughout 2016, ISIS] has been claiming terrorist attacks with no evidence that had anything to do with them tactically,” explained Erin Miller, program manager of the Global Terrorism Database. “That's part of their branding: they want people to think their reach is as wide as possible and as far as possible and encompasses big attacks and little attacks and sort of all things and they use this intentionally ambiguous language — they refer to ‘soldiers of the caliphate.’”

Miller and her colleagues have organized a subset of their database that shows terrorism related only to ISIS activities. They grouped incidents in three major categories: ISIS core, attacks organized and funded by the group in Syria and Iraq; ISIS-affiliated, attacks carried out by groups that have made public statements of allegiance to ISIS; and ISIS-inspired, attacks carried out by individuals who have left some evidence that they were influenced by ISIS propaganda.

When mapped, all ISIS-inspired attacks occur in western countries, like the Pulse nightclub shooting in Orlando in June 2016 or the truck attack in Nice in July 2016. ISIS-affiliated incidents are clustered around the areas where those terrorist groups operate.

According to the report posted by Amaq, the attack in Las Vegas was also ISIS-inspired.

The report said Paddock “responded to calls to target the coalition.”

Callimachi said that that phrase is a reference to a speech by ISIS spokesman Abu Muhammad al-Adnani in 2014, where he called on the global community to commit acts of violence at home, instead of coming to Iraq and Syria.

If the claim that Paddock was an ISIS recruit turns out to be false — it will have a large impact on ISIS’ reputation.

“I think ISIS will have blown a mile-wide hole in their credibility,” Callimachi said.

Experts and researchers will have to revise the assumption that these claims are being reported selectively and in good faith.

“This is a group that has been relatively disciplined in only claiming attacks that they did themselves, or were carried out by people who were inspired by them,” Callimachi said.

For members of ISIS and potential recruits, a mistaken claim is likely to have a smaller effect.

Still, Callimachi saw dissent among reported ISIS members on the messaging app Telegram on the evening following the attack. One member asked for proof that Paddock was “indeed a khilafa soldier.”

23. The response he gets from a suspected ISIS member is, well if you don't believe us why don't you just go & open his heart (& inspect it) pic.twitter.com/VNXrFSAqNE

“The ISIS member who was moderating the chat room gets annoyed and snaps back at him, and says ‘if you don’t believe the Muslims, the only way you’re going to know is if you take the man’s heart out of his chest’,” Callimachi said.

As of Tuesday, the FBI has not found any connection between Paddock and ISIS.

The fact that Paddock doesn’t fit the profile of an ISIS recruit does not immediately rule out the possibility of influence, Smith said.

“If [ISIS] had a hand of persuading him in the first place, it would most likely be the case that they would have encouraged him to conceal that,” he said. “There were indicators that with all of this unprecedented recruitment activity that we saw taking place, especially in 2015, that they were engaging with a wider audience of prospective recruits."

ISIS has been known to gradually release additional information in order to retain public attention.

“[ISIS is] very media-savvy,” Smith said. “If they can get something in the media once, twice, maybe three times by gradually releasing information, that helps them meet that objective to stay in the news and terrorize the civilian populace.”