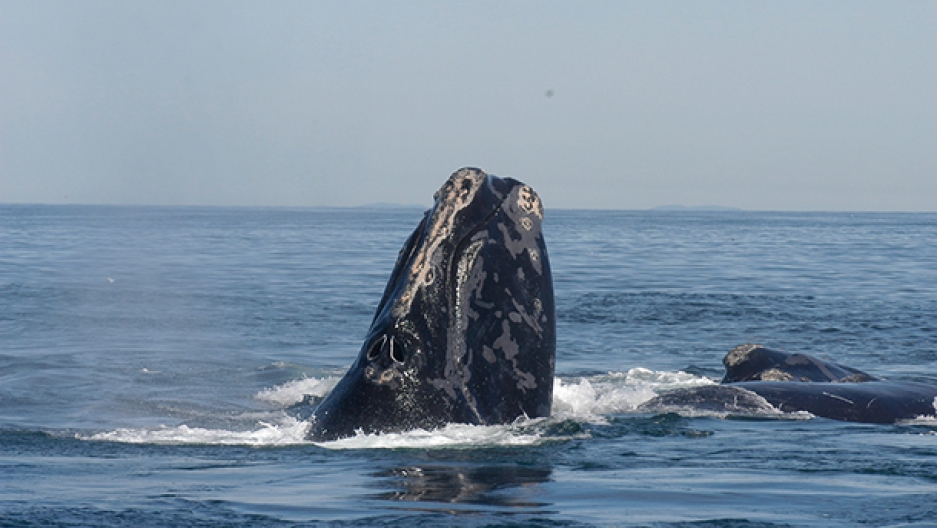 North Atlantic right whales, an endangered species, usually spend their summers in and around the Gulf of Maine to feed on copepods.

The discovery of 13 right whale carcasses, most of them in Canada’s Gulf of St. Lawrence, is causing alarm among scientists.

Only about 500 right whales remain in the North Atlantic, so 13 deaths represent more than 2 percent of the population. Seeing 10 of those deaths in the Gulf of St Lawrence, an area far north of the whale’s usual summer range in the Gulf of Maine, is “completely unprecedented,” according to Erin Meyer-Gutbrod, a postdoctoral scholar at the University of California, Santa Barbara.

“Right whales traditionally start off in the spring off of Cape Cod Bay, and then they spend their summer in the Gulf of Maine and the Bay of Fundy and off the Scotian Shelf,” Meyer-Gutbrod says. “While they're seen occasionally farther north than that, it's never been considered a traditional part of their feeding grounds.”

In the past few years, however, a survey found far fewer whales in the Gulf of Maine and the Bay of Fundy than in the past. Meyer-Gutbrod says this caused scientists to start looking farther afield to see where the whales are spending their summers.

So, scientists began a more intensive survey effort up in the Gulf of St. Lawrence and believe the right whales are now beginning to occupy these waters in much higher numbers than in the past. They theorize that warmer ocean waters may be driving the favorite food of these whales farther north, where the lack of regulation puts them at risk of ship strikes and entanglement in fishing gear.

Because the right whale is an endangered species, the US implemented fishing regulations in the whale's traditional feeding grounds, including mandatory vessel speed reductions and underwater listening devices, which allow boats to receive a notification when whales are nearby.

The fishing industry also made some changes, Meyer-Gutbrod says. “Many fishing lines now run along the seafloor instead of in the middle of the water, which makes it a lot harder for a whale to get tangled up in them. These are expensive fishing gear implementations that have actually made a big difference in the rates of anthropogenic mortalities in the Gulf of Maine.”

Scientists fear the change in whale behavior is being driven by changes in their food supply. Right whales eat copepods — a “sort of bug in the sea,” Meyer-Gutbrod says — which are rich and calorically intensive, compared to other zooplankton of similar sizes. The number of copepods varies from year to year, however, and in years when copepods are less available, right whales tend to have fewer babies.

For the females, being pregnant and lactating is an energetically intensive process, Meyer-Gutbrod explains. Whether or not a female can have another calf soon after depends on how quickly she can replenish the blubber lost during her previous pregnancy and lactation.

“The [population] modeling studies I’ve done in the past do not indicate that whales are dying because of lack of food, [so] it’s much more likely that they're just reproducing much slower,” Meyer-Gutbrod says. “The question is if they're searching for food, what is that going to mean in terms of the more common forms of mortality, which are anthropogenic in origin — the fishing gear entanglements and vessel strikes?”