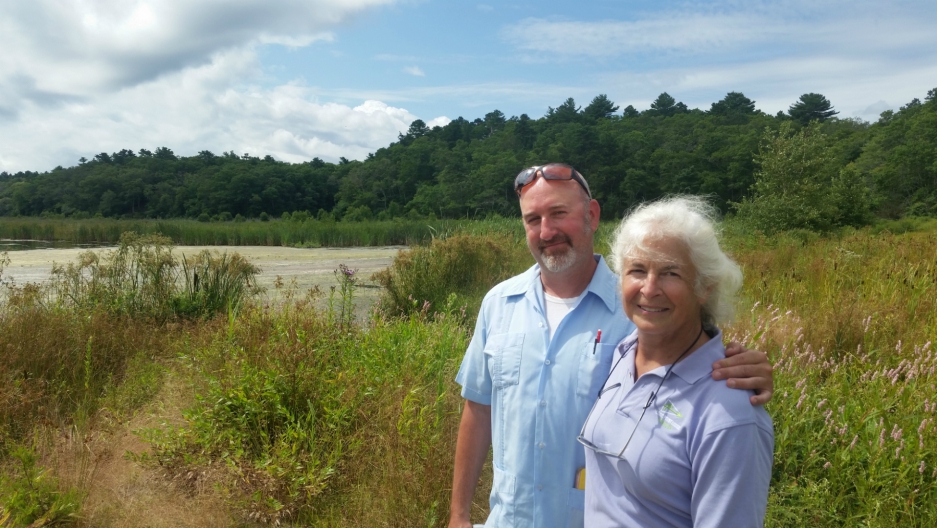 Glorianna Davenport and Alex Hackman survey the restored wetland that was once a family-owned cranberry bog.

Audrey Schulman was 12 when her dad started talking about buying a farm. “I pictured a horse farm,” she said. “Something scenic, with lots of animals.”

Instead, he bought a cranberry bog — basically a former marsh that, with help from a dam and reservoir, could be flooded at will. Cranberry bogs are iconic in Schulman's home state of Massachusetts. They cover 14,000 acres and supply countless Thanksgiving dinners.

To Schulman's surprise, the bog had a certain beauty. The deep red berries floated in water so dark it seemed black. She liked to swim in a big reservoir on the farm.

“It was a very quiet place,” she said. She remembers hearing the wind and the trucks that picked up cranberries. “But that was about it.”

In fact, the bog was so quiet that it unsettled Schulman. The land seemed unhealthy, she said. Normally, a bog would breed all kinds of plants and animals — but to help cranberries grow, farmers rely on a lot of chemical pesticides. That’s why it was quiet. “There were no bugs there, and without bugs, there were no birds." 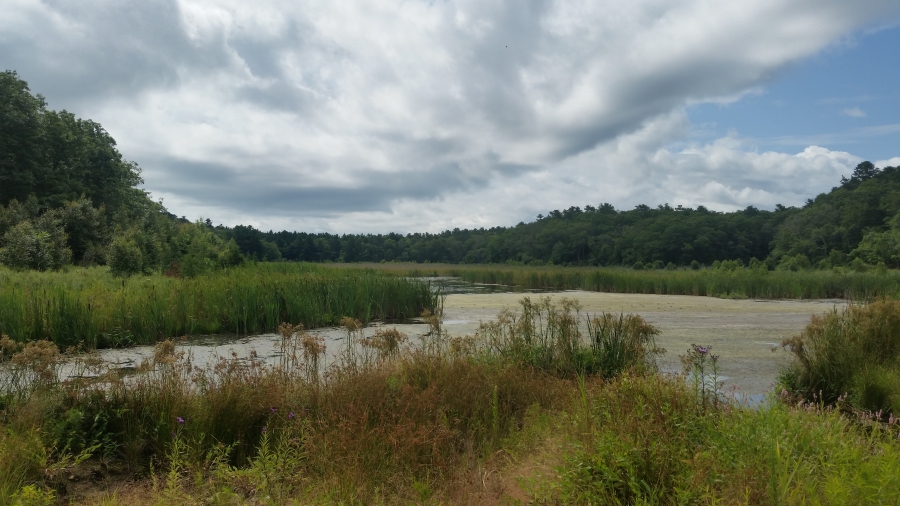 The Schulman's cranberry bog in Massachusetts.

For decades, Schulman’s father saw the 200-acre farm as a family heirloom. But a few years ago, he asked his children who wanted to take over, and no one volunteered. So the family started to talk about getting rid of the bog — and, if possible, returning the land to how it used to look.

This is where Alex Hackman, an employee of the Massachusetts Division of Ecological Restoration, comes in. Hackman explains that a cranberry reservoir and bog tends to disrupt the local river system. “They form ponds in the middle of what naturally would be a wetland and stream complex,” he said.

Hackman teamed up with Schulman’s stepmother, Glorianna Davenport, to try and reconnect that natural system — by dismantling the bog. Hackman hopes this so-called “green exit strategy” will inspire others. The total cost of the “restoration” was $3.5 million, said Davenport.

If that seems like a lot, Hackman said, keep in mind that wetlands do a bunch of expensive things. They store excess water and foster fish. And they're a buffer against rising seas and flooding, of the sort recently seen from Florida to Bangladesh. “Lands like this historically captured carbon — stored it underground as partially decomposed plant matter,” he said.

Schulman and Hackman destroyed the dam to drain the reservoir. Instead of cranberries, they suddenly had a vast expanse of mud. But there was life in it. With the water gone, eagles swooped in to feast on exposed mussels. Hackman says sometimes you have to do some short-term damage to help nature heal in the long run. “I remember us using the term 'cycle of life' a lot back then,” he said.

One year later, tall reeds have sprouted out of the mud. “It's pretty much an ocean of plants,” said Hackman. It's hard to tell that this used to be a farm — but walking through the reeds, it's still possible to find a patch of the old cranberry.

Hackman and Davenport pointed out one of the big differences between the old cranberry bog and the new wetland. It's what you hear. “I believe we have a mix of crickets, frogs, birds,” Hackman said. Davenport finished his sentence: “and then we have a lot of fledgling birds, just learning to sing.”

We’d like to hear your stories of changing or disappearing places. Maybe it’s a favorite beach that’s washing away. Or a forest cut down to make way for housing. If it’s important to you, we want to hear about it. Use your smartphone to make a voice recording of yourself talking about this special place and email it to us at environment@pri.org. We may feature your story on The World and PRI.org.