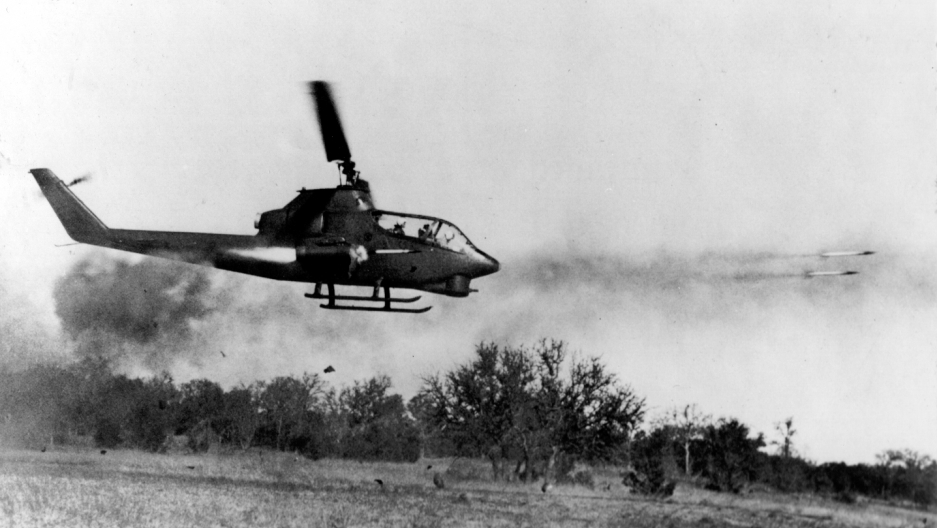 A US Huey Cobra fires rockets at a target in Ia Drang, October 1965.

Courtesy of the US Army

Vietnam loomed large in my early childhood. Images of choppers and rice fields, guns and body bags, filled the television screen each night. One year, my mother jumped every time the phone rang at an odd hour.

It was 1968, the most deadly year for Americans in Vietnam, and my mom’s youngest brother was stationed within a couple of miles of the demilitarized zone, as an adviser to a South Vietnamese unit.

He came back, a year later, with medals for heroism in combat, and an experience of a near miss, which he only shared with me years later, about the time he felt an impact on his torso, and felt liquid run down his body, and at first thought he was just too much in shock to register the pain. He later realized that a bullet had gone through the outer wall of his canteen, and lodged in the inner wall, saving his life.

I entered high school soon after the Vietnam War wound down. A heavy silence fell around this war America had lost, and what it had done to those affected by it, Americans and others. We heard little about the 3 million Vietnamese who had died in the war, most of them civilians, or about the 1.8 million Cambodians who died in the second half of the ‘70s under the Khmer Rouge, a group of Chinese-backed, anti-modern communist extremists who’d gained support in part thanks to the US carpet-bombing of Cambodia, a US attempt to destroy North Vietnamese supply lines and the Ho Chi Minh Trail.

As I moved through high school and college, I kept coming back to Vietnam, trying to understand what it had all been about, why we went there, why we lost, what Vietnam was like before and since the war. I watched every minute of the 1983 PBS series, based on journalist Stanley Karnow’s excellent “Vietnam: A History.” I talked with my uncle about his experience, and his respect for the Vietnamese he’d met and worked with, and his complicated feelings about the war. I read journalist Michael Herr’s searing reportage in “Dispatches,” and novelist Graham Greene’s prescient take on American involvement in Vietnam in “The Quiet American” (A much quoted quote in it, about a young American operative: “I never knew a man who had better motives for all the trouble he caused”). And still, something seemed to be missing.

What was missing, I realized, was that the Vietnamese in these stories were rarely shown as three-dimensional human beings, people who loved their families and their country, had a culture rich in poetry and literature, values of loyalty, perseverance and discipline, that served them well during a war that many of them saw as a fight for their country’s independence against yet another invader, not just after French colonial rule, but also after Chinese colonial rule centuries before. American policymakers mostly saw Vietnam as a place where communism needed to be stopped and reversed, lest all the Southeast Asian dominoes fall. But communism was a relatively recent overlay in Vietnam, and the alternative at the time wasn’t a robust and transparent democratic system, but a series of mostly autocratic and corrupt leaders in Saigon, who weren’t exactly rigorous upholders of universal human rights.

Ironically, Vietnam’s independence hero Ho Chi Minh had shown signs in the 1940s that he admired America. Vietnam’s Declaration of Independence from French colonial rule, written in 1945, included the lines: “All men are created equal. They are endowed by their Creator with certain inalienable rights, among these are Life, Liberty, and the pursuit of Happiness." Some US intelligence operatives thought at the time that there was room for the US to work with Ho Chi Minh. But then the Cold War gained momentum, and cooperation with communists — even communists who liked our Declaration of Independence — was deemed out of the question. Could millions of lives have been spared, and a costly war avoided, if American leaders had tried to win over Vietnam with soft power and seduction, rather than through bombs and bullets?

As a young journalist, I wondered how Vietnamese were processing their own experience in the war, and how it had scarred and shaped them. This is what first got me interested in being an international correspondent, in moving to Southeast Asia and covering Vietnam and Cambodia regularly for seven years. What I found, over those years, was a country of people who were, as a group, resourceful, resilient, with a wry sense of humor and a deep sense of historical perspective. I was surprised to find little hostility toward me, as an American, even in the late ‘80s, when the war was still fresh in people’s memories. “Wars are between governments,” people would say. “Anyway, we know many Americans opposed the war.”

To be clear, life under communism didn’t turn out to be a walk in the park, especially for Vietnamese who had served in the army or government of the South. Hundreds of thousands of such people were sent to re-education camps. Hundreds of thousands more escaped by boat from Vietnam. And millions of Vietnamese suffered through years of shortages and repression, until the Vietnamese Communist Party’s main patron, the Soviet Union, declared its glasnost and perestroika reforms, and Vietnam followed suit by declaring its own doi moi economic reform era.

Even though Vietnam was getting much of its outside support and trade from the Soviet Union, Vietnamese, even then, seemed to have a lot more positive feeling for Americans than for Soviets. I learned on my first visit to Hanoi to say I wasn’t Russian, I was American; it turned scowls into smiles.

These days, Vietnamese as a group feel more positively toward Americans than any other Asian population, a 2017 Pew Global Research survey found. Most Vietnamese are too young to remember the war, and having grown up in one of the world’s fastest-growing economies, many of them are too busy making money and enjoying life to dwell on the war. When I was sent in as a foreign correspondent to write about the anniversary of the end of the war, in 1995 and 2005, young Vietnamese would be happy to be interviewed, but would be bemused about why we were giving all this attention to a receding chapter of history that they felt had little to do with their lives.

But for Americans, if revisiting and understanding history helps avoid making the same mistakes again, Ken Burns and Lynn Novick have done us all a favor with their 10-part, 18-hour documentary series, “The Vietnam War.” Their interviews with former North and South Vietnamese soldiers and civilians, as well as with a wide range of Americans, go a long way to filling gaps, and adding contours and nuance, even if the script too often refers to the North Vietnamese as “the enemy.” Half a century later, looking at history through a more critical lens, seems a good time to drop the other-izing and just use neutral terms.

Mostly, though, if we are the stories we tell ourselves, at least in part, this is now a story that could make us think more carefully before going to war, more deeply about the values and motivations and perspective of those on the other side, and more compassionately about how the effects of war can reverberate for generations, on both sides, long after the last bullet is fired.