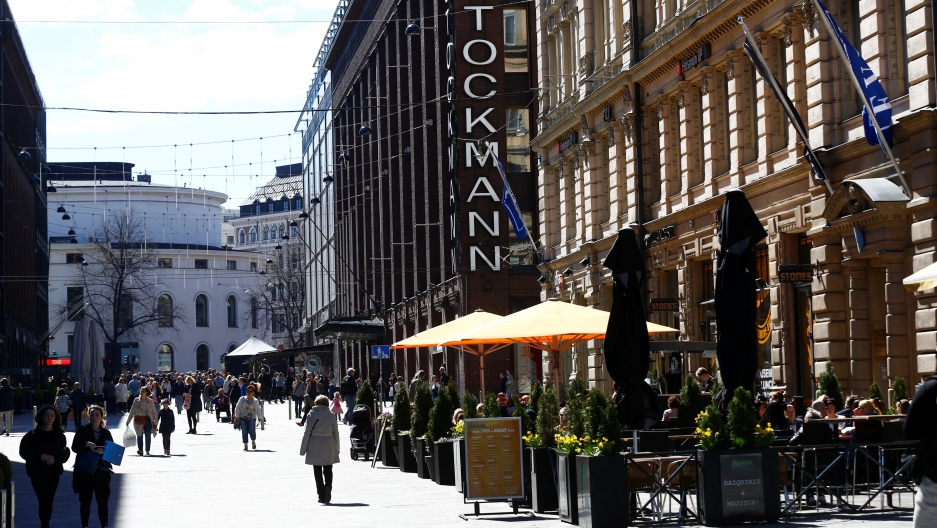 People walk past Stockmann shopping center in Helsinki, Finland, on May 6, 2017.

Countries from the UK to China are rolling out extraordinary plans to eliminate fossil-fuel-guzzling automobiles. But one Nordic capital city is mixing tech and urban planning to make sure citizens do not need a car at all.

Finland’s capital Helsinki is growing quickly as it attracts labor from the countryside and overseas. Instead of building more freeways to accommodate the growth, however, officials are trying to make public transit so good that people just give up driving.

Johanna Koskinen, 24, a student who lives in the suburb of Vuosaari, likes the idea if it means extending subway hours.

“Cars are expensive in Finland anyway. A lot of people out here can’t really afford to run one,” Koskinen said. “The metro already makes Vuosaari pretty accessible, but right now it closes at 11:30 p.m. If we are going to reduce car use even more downtown, they need to make sure that people like us don’t lose out.”

Related: The UK joins a move to ban gas and diesel cars by 2040

Helsinki already has high transit ridership. Little more than o in 5 commuters drive cars. But Sinnemäki and others believe the city can further reduce traffic that produces carbon emissions and undercuts quality of life.

Anni Sinnemäki, a politician in Helsinki, sits at a tram stop.

Courtesy of the Finnish Green Party

“We want to bring our target of carbon neutrality by 2050 forward,” said Sinnemäki, whose Green Party made big gains in municipal elections in April after promising major changes in transit. “That means having an ambitious transport policy, energy efficiency, renewables and improvements to the city social environment where people can meet each other and socialize at the same time.”

City officials didn’t have an exact goal, except to significantly reduce car traffic.

“We want a situation where nobody in Helsinki needs to have a car,” she added. “There are people, families with children who play hockey, for example, who might need one sometimes. But I am certain that it will go down well below 21 percent as the city center expands.”

Statistics released by the city government show that about 7,000 new people have been moving into Helsinki annually in recent years. There are now around 630,000 residents. By 2024, that number could rise as high as 850,000, according to forecasts.

City leaders want residents to be able to travel anywhere in the metro area on one fare that would include trips on the subway, trams, a bike-sharing system and even by-the-minute electric car rentals. Housing has been zoned around streetcar and subway lines to attract riders. New corridors have been opened only to bikes and streetcars.

A vehicle passes near a dock for Helsinki's bike-sharing system, on May 3, 2017.

In fall 2016, Helsinki residents were given a glimpse of the future when officials tested the robottibussi — Finnish for robot bus — on the city’s harbor front. Smaller than conventional buses, these driverless, automated vehicles can be linked to a smartphone app and programmed to cover bespoke routes, collecting people from instantaneously booked pickup points and dropping them at transit hubs.

The buses are due to be introduced for larger scale trial services in Helsinki later in the fall of this year, so researchers can see how they perform in denser downtown conditions.

Some residents weren’t so quick to embrace the plan.

Despite their enthusiasm for public transportation, Finns hold their cars dear, with almost one vehicle per head in the sprawling country of 5.4 million, according to the Finnish Transport Agency, a figure well above neighbors Sweden and Denmark that has climbed steadily since the 1960s. Cars are especially popular in the winter, when temperatures can sink to 4 below zero Fahrenheit.

Tuomas Kiuri, 28, is a transportation consultant who lives downtown and currently owns a car.

“I would like to believe it is possible, but it is a political thing,” he said. “It requires changing the paradigm. If I am going to a place that is further away from downtown, where the transit isn’t efficient or if I’ve got a lot of stuff to carry, then the car is better.” 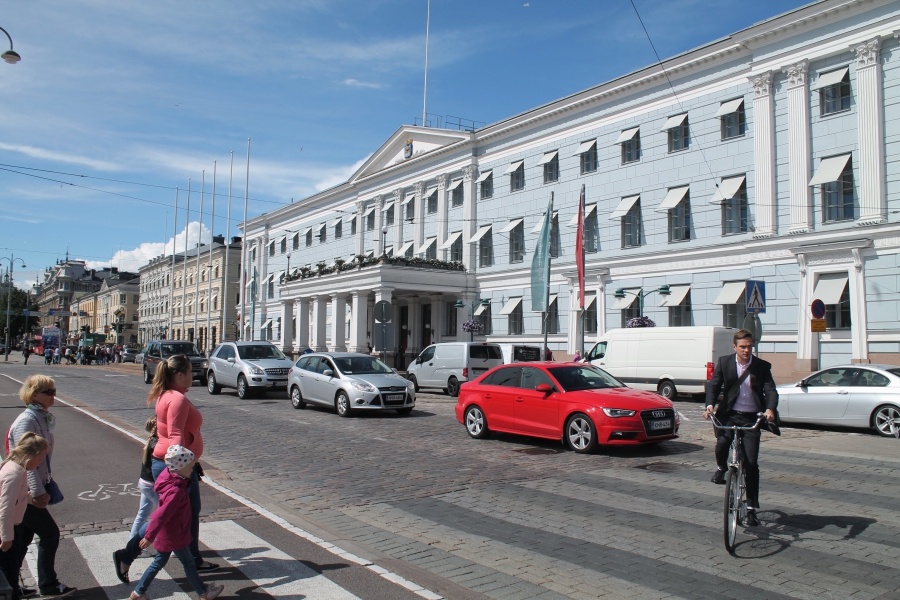 But Kiuri believed that self-driving buses could replace cars for some journeys.

“It is hard to estimate exactly when it will happen. But vehicles are going to be self-driving in the future, and buses are the best way to implement that,” he said. “There are fewer of them compared to cars.”

Related: The car of the future — the very near future — might be driven by the wind

For the plan to work, the city is relying on ongoing developments in smart mobility technology.

Big data and smartphones mean authorities can better map travel needs and respond to individual journeys. The city has also deregulated its taxi monopoly and is looking to integrate them into its smart ticketing system too. By bringing in taxis to transit fare structures, citizens could book and pay for taxis using their smartphones and subway passes even when riding with commercial firms like Uber and Lyft.

Smart technology is no substitute for investing in infrastructure though, Sinnemäki noted. She is now pushing her colleagues on the City Council to devote more funds to the project.

“In a dense city environment, to make use of these technologies we still need investment in rails,” she said. “There are people who said that is pointless because we will all have driverless cars. But we just do not have enough street space.”