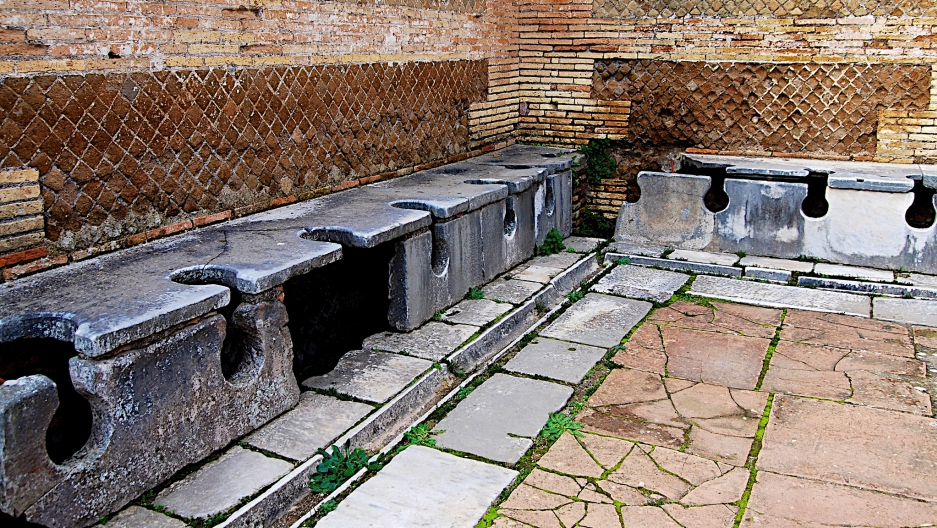 Ancient public latrines at the Roman port city of Ostia.

How do you judge the health of an economy?

The number of new homes is often one good way to tell. But when it comes to ancient Rome, researchers recently discovered another indicator: The city’s early plumbing system. In their findings, published in Proceedings of the National Academy of Sciences, the researchers describe how ancient Rome’s water pipes tell the story of an empire’s rise — and its struggles.

“It's a really interesting story because we've known from written records and archaeology that the Romans used lead pipes,” says ArsTechnica tech culture editor Annalee Newitz, who covered the story. “And this group of researchers in France wanted to know how many pipes they'd had at what times, how extensive was the pipe system?”

In their study, the researchers examined soil cores from Ostia, Rome’s earliest harbor, where the city’s water runoff drained. Layers of lead in the soil “corresponded to periods in the Roman Empire when there was a lot of economic growth,” Newitz says. “And so the more lead they saw, the more pipes they speculated were in use during that period of time, and they saw a lot of really interesting patterns.”

“Basically, as the pipe system expanded, what it meant was that the Empire was spreading,” she says, explaining that Romans sourced their lead from European colonies, making the city’s water infrastructure hugely expensive to build and maintain.

“There's actually this fantastic treatise that was written by a Roman water commissioner in the early part of the first millennium — his name was Frontinus,” she says. “And he talked extensively about how there were all these troubles with maintaining the pipes, they had to recycle all of the pipes, and of course, the ever-present problem of water piracy.”

As Newitz points out in her article for ArsTechnica, the expense of maintaining Rome’s pipes makes the plumbing system a mirror for the empire’s fortunes. In one section of the Ostia soil core, researchers found a 50 percent drop in lead over previous years, corresponding to a period of civil wars during the first century B.C. — and suggesting there was little money left over to expand or repair Rome’s water infrastructure. Then, Rome’s fortunes turned.

“Once the city had recovered from the hardships of the wars, the researchers saw a steady increase in lead over the years that span the Empire's height during the 1st and 2nd centuries,” she writes. “This was when Frontinus led an effort to rebuild the city's plumbing system while wealthy Romans added crazy water features to their homes.”

According to Newitz, the study also adds evidence against the persistent theory that lead poisoning caused the fall of the Roman Empire. (This theory, she points out, has already been debunked by a number of researchers.)

“So I think consensus now is that probably there was not enough lead in the water to result in any kind of significant lead poisoning,” she says. “And as I was saying earlier, the more we see of the pipes, the more indication we have of economic growth and prosperity in the empire. So it's really [that] the pipes are correlated with the rise of the empire, rather than the fall of the empire.”