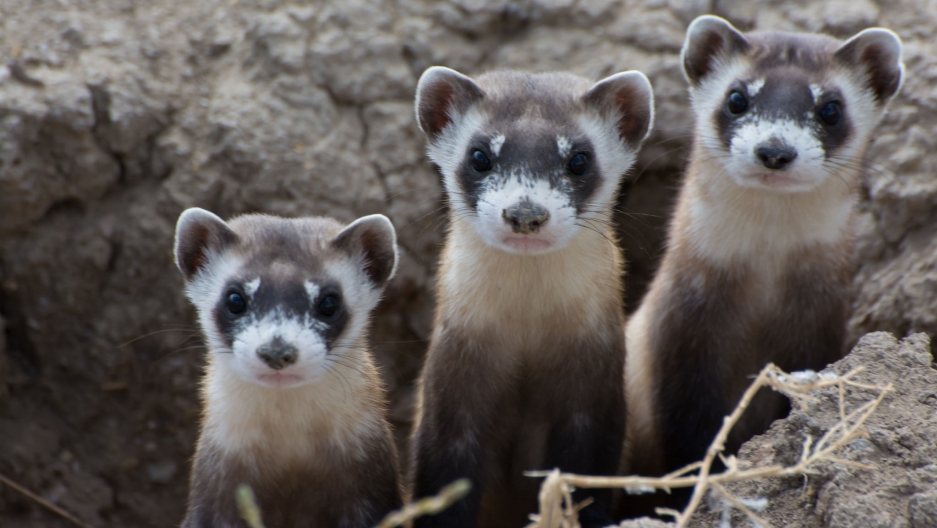 With its silky fur and bandit-masked face, the black-footed ferret cuts a cute — if lethal — figure on the American plains. It’s also the star of a great comeback story: The species was thought extinct until 1981, when a small group of ferrets was discovered on a Wyoming ranch.

Today, there are more than 500 black-footed ferrets in captivity and the wild, thanks to ongoing breeding and reintroduction efforts. But hard times aren’t over for the little predator: It mainly hunts prairie dogs, which are widely considered to be agricultural pests. What’s more, both ferrets and prairie dogs are dying from an invasive plague that’s slashed ferret numbers from 1,500 just a few years ago. So, can the black-footed ferret prosper again?

John Hughes, a wildlife biologist with the US Fish and Wildlife Service’s black-footed ferret recovery program, is hopeful — relatively speaking. “Ferrets have always been a rare species,” he notes. Their “Achilles' heel,” he says, is their dependence on prairie dogs for food and shelter. (Black-footed ferrets live in empty prairie dog burrows.)

“And while prairie dogs are much more adaptable to changing conditions, ferrets, due to their territoriality, are not,” he says. “As habitat was lost and prairie dog control occurred, ferrets declined along with it.”

There’s also the sylvatic plague to consider. Thought to have been introduced by shipborne rats in San Francisco more than a century ago, Hughes says the invasive bacteria have been marching eastward ever since — straight across the black-footed ferret’s native territory. His team has been using insecticides to kill fleas — the plague’s primary vector — inside prairie dog burrows.

“That has been somewhat successful,” Hughes says. “It has allowed us to hang on to ferret populations at several of our landmark sites.” But the insecticide has major downsides: “It is labor-intensive and expensive,” he adds. “And … you know, it’s never a good idea to be putting out a broad-spectrum insecticide year after year.”

An oral plague vaccine for prairie dogs is also in the works, and Hughes says the early results are promising. “If the rodents consume a bait, then they’re immunized for their entire life against plague. So we see this as a very important management tool to keep ferrets and prairie dogs on the landscape where they’re tolerated.”

But to thrive, the black-footed ferret will need more than plague control — it needs land and food. As Hughes explains, the ferret’s most important prey, black-tailed prairie dogs, are native to the Great Plains. “And most of the Great Plains is privately owned,” he says.

The goals for the ferret recovery program, which Hughes calls “relatively modest,” are to get 3,000 wild ferrets living in nine of the 12 states where they were originally found, with 10 populations numbering at least 100 ferrets strong. “And we feel that we can do that on a total of 500,000 acres across the 12 states if those acres are purposely managed for plague,” he says.

That’s where landowners like the Haverfields come in. In 2007, Kansas ranchers Larry and Bette Haverfield welcomed 14 black-footed ferret kits onto their land — a reintroduction that meant fostering a healthy prairie dog population there as well, much to the ire of their neighbors and the county.

“I think [my father] just had a strong belief, as a rancher, that prairie dogs were part of the ecosystem and a keystone species on top of that, which meant that a lot of native animals and birds relied on the prairie dog for food and shelter,” says Cathy Lucas of her father, Larry Haverfield, who died in 2014.

“He did rotation grazing and was a big believer in that, and he believed prairie dogs helped with that and made the grass more nutritious, aerated the soil, and rain would percolate in the burrows of the prairie dogs, all things that he thought contributed to successful ranching.”

For the black-footed ferret to thrive, Hughes hopes more landowners in the Great Plains will think along the same lines as the Haverfields.

“Really, it is voluntary and incentive-based, and we don’t need every person out there to support prairie dogs and ferrets, but we just need enough to support that recovery goal. So it’s, again, very voluntary, and we’re very grateful for landowners like the Haverfields that are willing to support ferret recovery.”