People look at a flooded expressway after the area was hit by Hurricane Maria in Yauco, Puerto Rico, Sept. 21, 2017.

“¿Estás bien? (Are you okay?)” my brother asked, a whisper in the darkness. Then he pointed his flashlight at me: “Alfredo?”

We were just a couple of hours into Hurricane Maria’s reign of terror as it made its way through Puerto Rico. Unlike many, we were in our mother’s two-story concrete home in a comfortable, middle-class suburb of San Juan. One town over, our mother was keeping busy taking care of her own mother and ailing uncle.

My thoughts, scrambled from a lack of sleep, gathered in slow motion. To my brother, it must have seemed as if my mind had wandered or gone completely blank under the spellbinding cacophony of whooshes and sloshes and clangs. My initial impression of the storm’s capacity for violence had filled me with dread.

Water was already beginning to seep in from our balcony to the main hallway on the second floor and into every room — including the one we had settled into with the family cat, two dogs and our supplies for the night. We’d already laid out all available towels, stuffing them under doorways in a fruitless effort to slow down the flooding.

Inside the adjacent room, the window frames wheezed and rattled, letting water in through their seams. I pressed my hand against the weather-resistant glass and felt as the wind first tried to push the window into the house, then pull it back. I began to doubt the windows would hold. And the worse, by far, was yet to come. 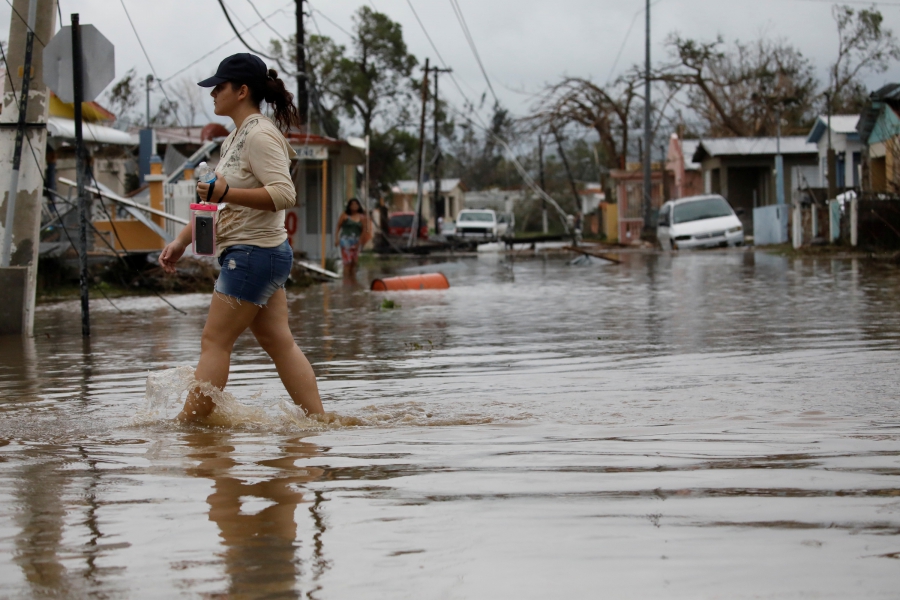 A woman wades through a flooded street after the area was hit by Hurricane Maria in Salinas, Puerto Rico, Sept. 21, 2017.

If not for Hurricane Irma the week before it, Maria would have been the first major hurricane to have its effects felt on the island during the smartphone age. This meant some of the affected were able to maintain communications with loved ones in Puerto Rico and the outside world, as well as access up-to-the-minute weather data and maps throughout the storm — or at least until the nearest cellphone tower collapsed.

Meteorologist John Morales had reported sustained hurricane-strength winds for San Juan starting early Wednesday morning, with the harshest conditions coming four hours later. And here we were, my brother and me — still the middle of the night— holding down the fort, trying to keep at least our pets dry and calm enough so we could weather the long hours ahead. The decades-old tree towering above the house had yet to snap and topple over the driveway. The wooden structure on our roof — a gazebo of sorts — had still not flown away in pieces. But the anticipation of these types of events had already drained us of significant amounts of energy.

Seeing how this behemoth of a storm would unfold as a type of endurance test, with over 24 hours of storm conditions, the immediate connection to others provided by cellphones and social media proved invaluable.

“¿Están bien?” our older brother asked from his apartment in Connecticut. Outside, powerful wind gusts surrounding the eye of the storm slammed against the house, peeling away layers of paint from its walls.

“I'm scared,” I confided, feeling some immediate relief. “It'll be over soon,” he said, before hanging up. And I trusted him.

Then it was my turn to check up on our mother to see how she was doing and relay any news. Happy to hear her still in good spirits, though exhausted, I mentioned to her that Beyoncé posted in support of Puerto Rico to keep her on the phone a bit more. “That's nice,” she said. I couldn't help but think of the Destiny's Child song, "Survivor."

Thursday morning marked the beginning of a new era for Puerto Rico. As the storm subsided, so did feelings of impotence and fear. My family has been extremely lucky, as we have not lost anything that can’t be repaired or replaced. But others — and the country as a whole — face seemingly insurmountable odds. It is now our duty to be of service to those less fortunate by any means possible.

Still able to access the internet, I reached out to my friends on Facebook and Twitter, urging them to call their members of Congress to ask them for swift action. A few hours later, as the world began poring over the images of historic destruction and flooding caused by Hurricane Maria, I could see online how the Puerto Rican diaspora had begun to organize outreach, recovery and aid efforts. “Help is already on the way,” wrote a friend on Facebook.

Fresh out of my experience with the storm, it's hard not to well up at that urge for human connection. “We are going to be okay,” I thought as a warning popped on my phone's screen to let me know I had less than 20 percent charge left — not knowing where and when I’d be able to charge it back up, but knowing full well that I’d be able to do so eventually.

Alfredo Richner is the editor-in-chief at Puerto Rico Indie.