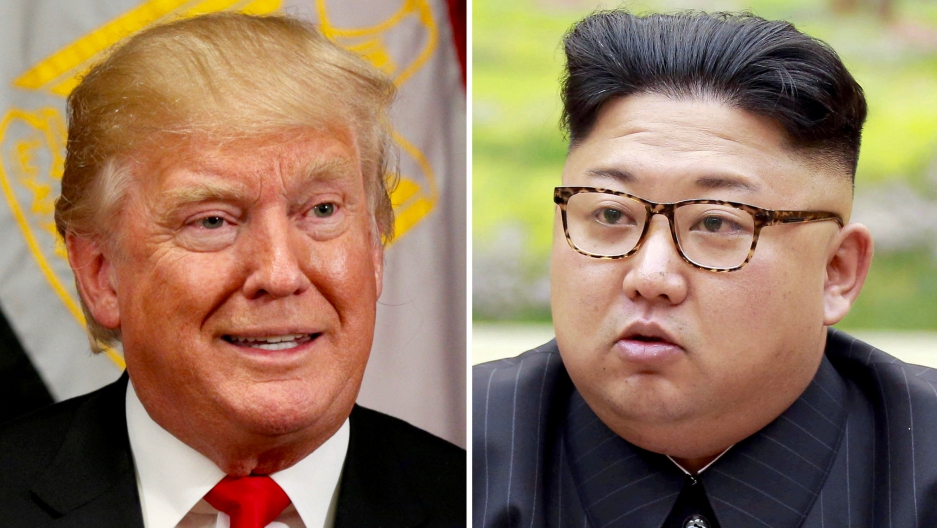 North Korea's leader is believed to be 33 years-old, which makes Kim Jong-un a millennial.

Donald Trump is 71, meaning he was born two full years before Kim's grandfather founded the Democratic People's Republic of Korea in 1948.

In addition to being "supreme leader," Kim is the living relic of a mostly bygone Communist era. His official title is chairman of the Workers' Party of Korea.

Trump, of course, is the president of the United States, a businessman and a reality television star.

But these are two men with more in common than might meet the eye at first glance. And the similarities show up in their latest rhetorical fusillades.

While Trump referred to Kim as "a madman" and "rocket man" this week, the North Korean dictator ridiculed the American president by calling him a "dotard," as the word has been translated by North Korea. It means someone, especially an older person, whose mental capacity has eroded.

Kim Jong Un of North Korea, who is obviously a madman who doesn't mind starving or killing his people, will be tested like never before!

Trump and Kim have both earned reputations for taking a hard line against their perceived enemies, though this looks different in each case. On the one hand, Trump has a reputation for firing people whose performance doesn't live up to his expectations. He also mocks people he disagrees with in merciless tweets. Kim isn't much of a Twitter guy. He simply has his political enemies shot.

Earlier this year, Trump had some rather nice things to say about Kim, including calling him a "smart cookie," says Isaac Stone Fish of the Asia Society. Stone Fish has been working on a novel called "Pyongyang is for Lovers."

"They share a very overbearing father and this desire to step out from the shadows of their patriarch," he says.

It's important to point out, however, that very little is known with great certainty about Kim, Stone Fish points out. "And we know so much about Trump."

"Reading between the lines, it does seem like the two men have a striking amount in common."

Both Trump and Kim grew up in an environment of wealth and privilege, the former as the son of a rich property developer and the latter as the progeny of two national leaders worshipped as gods.

Trump "insulted me and my country in front of the eyes of the world and made the most ferocious declaration of a war in history," Kim said in a statement read out on state TV on Friday. "I will make the man holding the prerogative of the supreme command in the US pay dearly for his speech."

The statement from Kim came in response to a threat made by Trump during his address at the United Nations on Tuesday to "totally destroy" North Korea if it continued to threaten the US.

Stone Fish says there is at least one similarity between Trump and Kim that should be celebrated by just about everyone, and that's the propensity of both men to not follow through with their threats. Trump has said he would unleash "fire and fury" on North Korea if it threatened the US, but has not done so. At least, not yet. Kim has also promised at times to bring death and destruction to the US and its allies, but never actually followed through, either.

"We are much luckier for it," Stone Fish says.