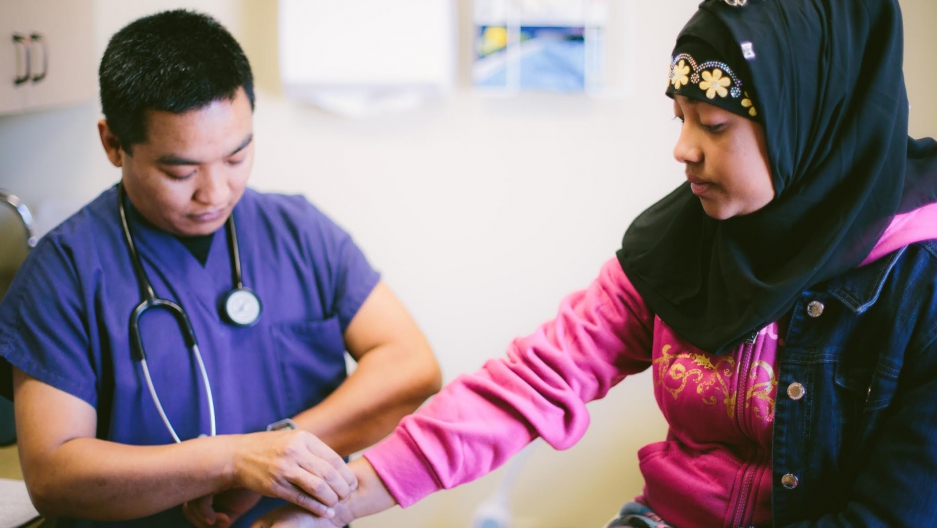 Beginning life in a new country as a refugee is not easy. Culture shock can kick in over food, languages — or health care.

For some women from conservative Muslim families, US health care practices can clash with what they’re used to. Reporter Sarah Varney went to Buffalo, New York, a city that is increasingly accepting refugees from countries such as Somalia, Syria and Iraq, to speak to some women who are in that position.

For Salima Abdullah Khalifa, restarting life in Buffalo has been a challenge. So much is new to her, including health care. Khalifa isn't accustomed to having a primary doctor or going to regular checkups.

“We don’t have primary doctor in my country. So now everyone has primary doctor, physical check every year," she says. Khalifa explains that only the very sick, or the rich, got medical care when she was growing up in Iraq.

But what is most distressing here for Khalifa is the Pap smear, the screening test for cervical cancer. For some conservative and Muslim women, it can be a threat. In the US, women are supposed to have their first Pap smear at around the age of 21, even if they're not sexually active.

Physicians who treat refugee women say it's not uncommon to find undiagnosed cervical cancer. Dr. Maga Osman, originally from Egypt and now working in Buffalo, says many of her refugee patients eventually agree to a Pap test once they understand the health benefits. But for women who still object, she tries to explain that Islam doesn't prevent them from taking care of their health.

"A lot of cultural issues may not be religious issues, but they’re so ingrained in people that they don’t know the difference," says Osman.

To hear more about how some refugee women cope with the culture shock of American health care, listen above.