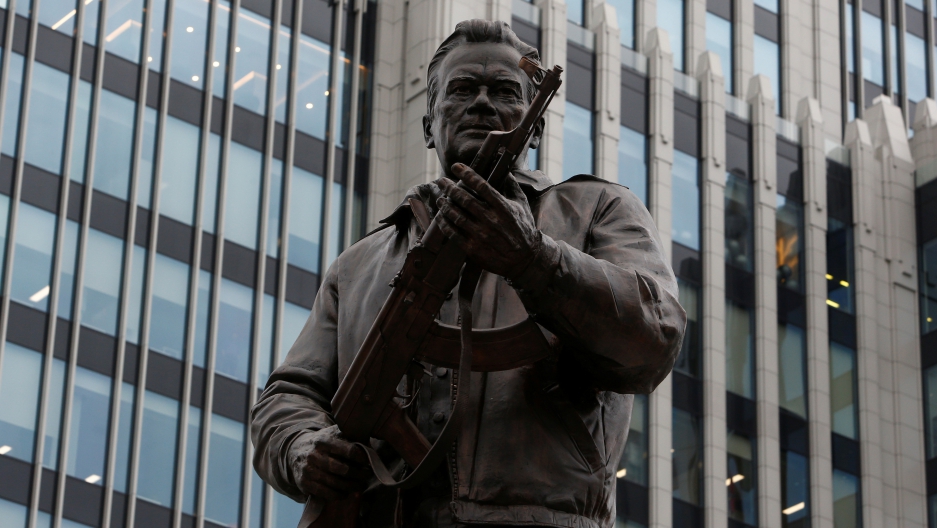 The new monument to Mikhail Kalashnikov in Moscow is shown here.

Russia is putting Kalashnikov on a pedestal, literally and metaphorically.

Literally, a statue of Mikhail Kalashnikov, the inventor of the iconic AK-47 rifle, was unveiled in downtown Moscow on Tuesday. Metaphorically, the Kremlin is pushing his rifle as “a true cultural brand of Russia.”

The Kalashnikov rifle, in all its forms, is the most popular weapon ever made. It's killed more people than any other single weapon, including the atomic bomb. And yet, now you can buy Kalashnikov tchotchkes at a special souvenir shop at the Moscow International Airport.

Related: Mikhail Kalashnikov, has died at 94, with 'no regrets'

Service members in the United States joke that if you dug him up after four years in the dirt, you could clean him up and he'd be as good as new, in the same way as his weapon would be. That gives you a sense of how robust, resilient and reliable the Kalashnikov rifles are, and how they're respected.

As a result, the statue honoring Kalashnikov was unveiled amid much pomp and ceremony. A military band played the Russian national anthem and patriotic songs from World War II. There were speeches and a full honor guard, in dress uniforms, and carrying — of course — Kalashnikovs.

An Orthodox priest in full regalia sprinkled holy water on the statue. It stands on a pedestal in a little square on Moscow's busy Garden Ring thoroughfare.

Kalashnikov is wearing a bomber jacket and clutching one of his creations. Underneath is a quote attributed to him: "I have created a weapon for the defense of my Motherland."

He came up with the basic design for the weapon after being wounded in the Great Patriotic War, fighting the Nazis — what we call World War II.

Russia’s minister of culture, Vladimir Medinsky, made the keynote speech, and he again pushed the idea of Kalashnikov as “a Russian cultural brand.”

All this fits with the Kremlin's efforts over the past few years to glorify the Russian and Soviet past. That elevation of the AK-47 into a cultural phenomenon, though, makes some Russians uncomfortable.

They say it puts this killing machine on a par with brands like Coca-Cola or Levi’s in America, or, Champagne in France.

A protester was arrested at the unveiling after pulling out a sign saying, "a creator of weapons is a creator of death."

Kalashnikov himself might agree. He never profited from the sales and licensing deals that, over the years, supplied the armies of 80 nations and countless guerrilla forces.

He was proud of his work and often said he had no regrets.

But just before his death, he wrote a public letter to the head of the Russian Orthodox Church, expressing regret that his rifle had become a weapon for criminals and child soldiers, and confessing that — "my spiritual pain is unbearable."