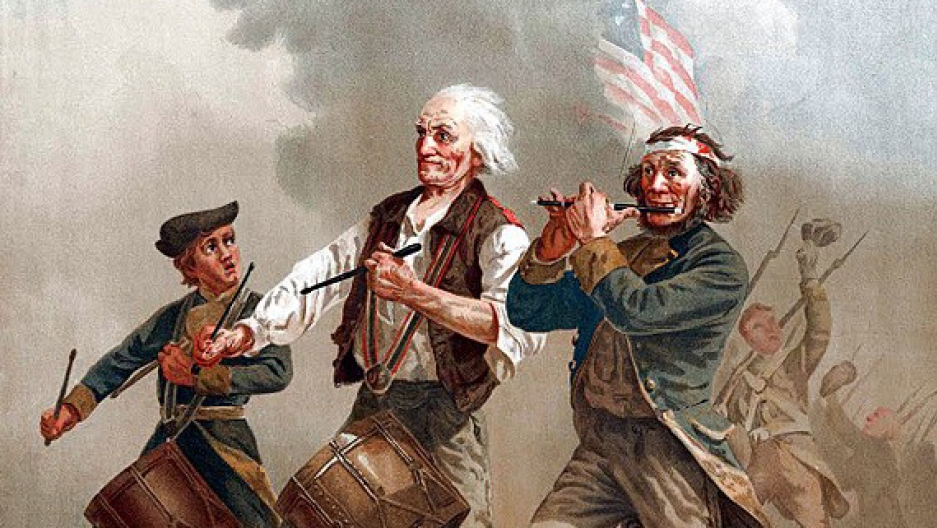 “The Spirit of ’76,” by Archibald Willard, which exemplifies the spirit of the citizen-nation in arms, with men of all ages stepping up when needed by their country. That history stood in stark contrast with a professional, standing army, which was despised by the Founding Fathers.

Donald Trump loves the military. He claims "our military will soon be the strongest it has ever been." And now he’s touting an idea for celebrating the US armed forces: a massive military parade in Washington, for the Fourth of July, perhaps as soon as next year.

He was inspired by the Bastille Day parade he witnessed in Paris in July.

“To a large extent because of what I witnessed [in Paris], we may do something like that on July Fourth in Washington down Pennsylvania Avenue,” Trump said on Monday in a meeting with French President Emmanuel Macron.

But this idolization of the military would come as an unpleasant surprise to the Founding Fathers.

James Madison, addressing the Constitutional Convention in Philadelphia in 1787, said "a standing military force, with an overgrown Executive, will not long be safe companions to liberty."

In 1776, Sam Adams wrote that standing armies were "nurseries of vice," "dangerous" and "the grand engine of despotism." A professional army, he wrote, was, "always dangerous to the liberties of the people."

To the Founding Fathers, the military was a necessary evil. Something you held your nose and tolerated. Not something to be celebrated. Remember, Madison was one of the leading proponents of a strong federal state, while also a strong opponent of a regular army and navy.

The leaders of the American Revolution recognized something later articulated by the leader of the Chinese communist revolution, Chairman Mao Zedong, in the phrase: "Political power grows out of the barrel of a gun."

There is no coercive power that can physically stop the military from seizing power.

The Founding Fathers looked to classical history for examples and saw how, from the time of Julius Caesar, professional soldiers could come to see themselves as separate from the population and to be more loyal to their officers than to the government. They’re also disciplined to obey orders.

These fears were confirmed in an incident in 1783 as the Revolutionary War was drawing to a close. The Continental Army was facing demobilization, and many of its members felt that Congress was trying to cheat them out of their promised pay and pensions. Documents circulated at the main camp at Newburgh, New York, calling for a march on the capital to compel Congress to do as the army wished. George Washington himself intervened to talk the disgruntled soldiers off the ledge.

Since the birth of the nation, US generals have always known that the army, and consequently their pay and rank, existed only on sufferance. To allay the fears of Congress, they have always striven to imbue the US military with the need to be subservient to the civil authority. Every officer is taught the significance of this civil-military relationship.

Perhaps a bigger fear, though, for the Founding Fathers, was that a standing army could be used by an authoritarian leader to bully his people into giving up their rights, or their money.

‘Armies kept up under the pretext of defending, have enslaved the people’

That’s what the Founding Fathers had seen in the century before the American Revolution. Madison told the Constitutional Convention that "throughout all Europe, the armies kept up under the pretext of defending [the nation], have enslaved the people."

They had seen this in England under Oliver Cromwell, in the 1650s. They had seen it in France, where Louis XIV used the army to close parliaments, forcibly raise taxes without representation and to persecute minorities. And they were afraid George III of England was planning to do the same to them.

The Founding Fathers were also afraid that a nation with a standing military might be tempted to get entangled in conflicts overseas, the cost of which could be ruinous to the country.

All this begs the obvious question of how would the new nation defend itself without a significant army or navy?

As with so much else, the Founding Fathers looked to the ancient Roman and Greek republics, where all citizens were trained in the use of arms and were called on as needed, in emergencies. Most states in the young American republic required all male citizens of a certain age to be part of the militia. The nation always celebrated those citizen soldiers who stepped forward in the hour of the country's need, while rejecting the idea of a "professional" army.

But the problem with these militia and volunteer armies is that they are terribly inefficient, and, by definition, undisciplined. This led to repeated humiliating defeats for the US military in battles with American Indians in the 1790s; and again at the beginning of the war with the British in 1812.

Even as late as the Civil War, Abraham Lincoln was plagued by short service troops, who would simply try to go home when their enlistments expired. His first army was called up for only 90 days; the next for 12 months. This confusion contributed to successive defeats.

So Congress reluctantly allowed the Army and Navy to grow, but the antipathy to the military continued into the mid-20th century. The citizen-soldier, volunteering in response to a crisis, remained the ideal.

After World War II, US policymakers were unable to stop Congress from massively downsizing the military, despite the looming Cold War. In 1947, the draft law was allowed to lapse.

North Korea interpreted this as weakness and, in 1950, invaded South Korea. The US had to scramble to respond.

As a result, the Cold Warriors won the policy debate in Washington, and, for the first time in history, the US established a large standing army, navy and air force, in peacetime.

But it remained a concern, with President Dwight Eisenhower, a former general, in his farewell address warning the nation to be watchful of what he called the “military-industrial complex.”

The next great landmark was Vietnam. The Vietnam War was a public relations disaster for the US military. To many, the war was seen as unnecessary. The draft meant that the nation’s sons were being forced into the fight. Poor discipline led to atrocities, like the My Lai Massacre.

After the war, the military and its supporters knew they had to totally rebuild its image. The draft was suspended and an all-volunteer force was created. That removed a lot of the military’s unpopularity. But there was also a deliberate rebranding, especially in the Reagan years in the 1980s. You might call the new brand the "service, sacrifice, honor, valor" brand.

The military was put on a pedestal for the first time, and assumed the elevated status we're familiar with today.