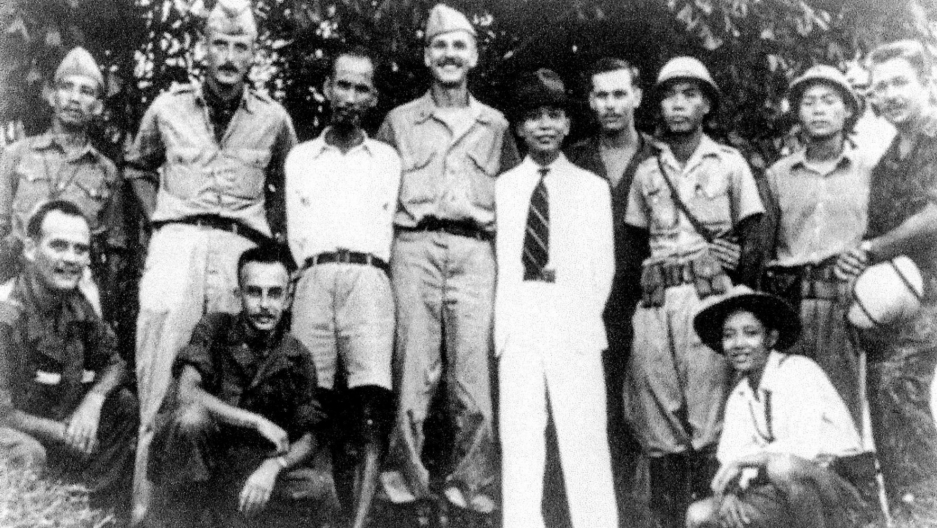 Ho Chi Minh (standing, third from left) and Vo Nguyen Giap (in a white suit) are shown with an OSS team in 1945.

The founding father of modern Vietnam is Ho Chi Minh. He led Vietnam's communist revolution against French colonial rule and then took on the US. But it seems he long had an admiration for the US and repeatedly sought the country's help in the decades before the Vietnam War.

What people might find most surprising is that he once lived in the United States: in Boston and in New York City.

Ho Chi Minh put to sea from French-occupied Vietnam at the age of 21, in 1911, to work as a cook on a steamship. He was well-educated and came from a relatively prosperous middle-class family. But finding his prospects stymied by imperial French control of his homeland, he was probably already politically active. So, he may have been looking for a way to broaden his horizons and see the world, rather than embarking out of poverty or desperation.

And see the world he did. He spent about eight years working and traveling, mostly as a cook or a baker, but also as a dishwasher. First in France, then the UK, then in the US before heading back to France.

Not too much is known about his time here. He traveled under various names, and employers did not keep very good records back then. But it's known that he worked at the Parker House Hotel in Boston, whose guests over the years included Charles Dickens and John Wilkes Booth.

As a cook there, Ho Chi Minh — the future leader of one of the most violent communist insurgencies the world would ever see — may well have made some of the hotel's signature dishes, such as the Boston cream pie and the Parker House roll, both of which were invented there. Ho Chi Minh wrote a postcard to a friend in France, mentioning his job there.

It’s not clear what he thought about the bitter party politics in America in that era, but he was a huge admirer of American ideology. Some Americans nowadays have this view of the US as a colossal and morally questionable imperial state. They forget that for most of its history, it was the revolutionary underdog. The country's whole narrative was one of resistance to a foreign tyrant — Great Britain. If any nation was a champion of other colonial underdogs, it was the United States, at least in the popular imagination.

So, the young Ho Chi Minh and other young nationalists around the world admired this and would try to court US public opinion by appealing to that strain of revolutionary anti-colonialism in America.

Back in Paris in 1918-19, Ho Chi Minh hooked up with other Vietnamese nationalists  — remember, thousands of Vietnamese and other subjects from France's colonies had been brought to Europe for the first time to assist with World War I.

US President Woodrow Wilson had put forth a list of 14 points as a basis for a peace settlement and one of these was the principle of self-determination. It's likely he was directing this at Europe, but colonial peoples everywhere were inspired by this to seek independence from their European colonial masters.

So, Ho Chi Minh and his fellow Vietnamese nationalists petitioned Wilson when he came to France for the Versailles Peace Conference in 1919. They wanted help to get their freedom from France, but were ignored.

Ho Chi Minh became a communist in the 1920s and launched a revolution back home in the 1940s after the Japanese occupied French Indochina during World War II. Again, he looked to the US for help.

Agents of the OSS, the Office of Strategic Services — the precursor to the CIA — were parachuted into the jungles of North Vietnam in early 1945 to make contact with him; in fact, a US medic helped nurse him back to health from dysentery and malaria.

The initial US intelligence assessment of Ho Chi Minh was that he was more nationalist than communist and was an acceptable partner. So, the US provided him with weapons and training teams to help teach his Viet Minh guerrillas how to fight.

Ho Chi Minh's admiration for the US is most clearly seen in the language he wrote in Vietnam’s own declaration of independence, which he issued on Sept. 2, 1945, just as the Japanese empire was crumbling in defeat. The first line of that declaration is a direct quote from the American version: "All men are created equal; they are endowed by their Creator with certain unalienable Rights; among these are Life, Liberty, and the pursuit of Happiness."

It’s likely this was partly sincere, and partly a play for US help in decolonization, based on Franklin Delano Roosevelt's anti-colonial rhetoric.

This has all led some writers to speculate counterfactually, that the US missed an opportunity to "flip" Ho Chi Minh, and thus could somehow have avoided the Vietnam War. Most historians think that's a step too far. Ho Chi Minh was a committed communist from the 1920s. He was persecuted for it and yet stuck to his guns. And however much he may have liked America's anti-colonial history, he could never have been a sincere partner for the US. The anti-communist forces in South Vietnam were much more natural partners for the US.

That's not to say he ended his admiration and emulation of America’s Founding Fathers. Ho Chi Minh and his top general, Vo Nguyen Giap, modeled their war to some extent on George Washington's fight against the British: wear down the enemy, avoid catastrophic defeat, keep the army in being and simply make it too expensive for your superior enemy to continue the war.