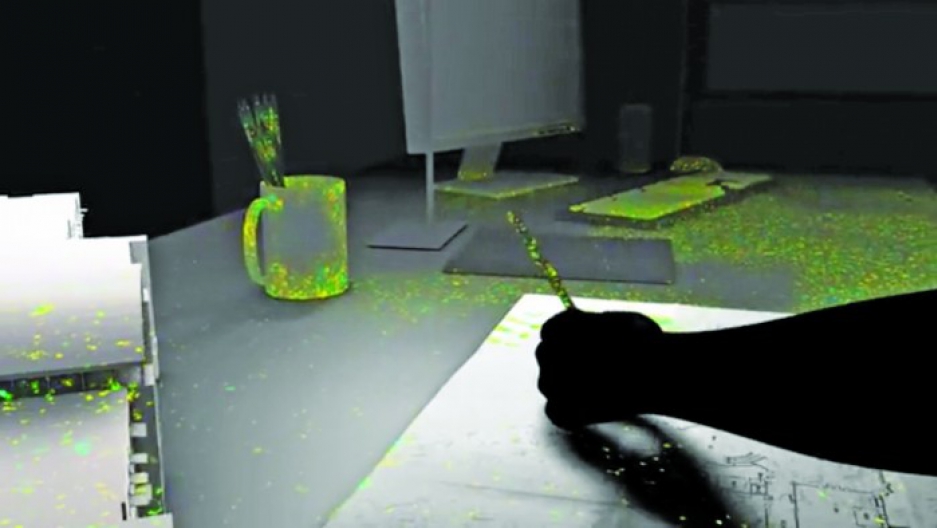 Humans and the spaces we live in contain a "microbial aura" that can affect health and well-being in ways scientists have yet to understand.

In the past decade, the microbiome of the human gut — the trillions of bacteria, viruses and fungi living inside of us that may influence our health and happiness — has become a widely discussed area of research. Less well-known is the world of microbes outside our bodies — the microbiomes of where we live and work.

These microbes live with us, sleep with us, shower with us and eat with us in our offices and homes, and scientists know relatively little about them.

“In every place you lie down, sit down, go to the bathroom or eat something, there’s kind of an ‘aura of you,’” says Rob Dunn, professor of applied ecology at North Carolina State University and author of The Wildlife of Our Bodies. “But then, if you look around in more detail, there are smaller habitats that have specialized microbes, like in your sourdough bread, in your beer, or in your cheese. It’s a very complex ecosystem around you right now.”

These organisms thrive indoors — despite our best efforts to keep them out — and they can affect our health in ways scientists aren’t yet clear about. So recently, the National Academies of Sciences, Engineering and Mathematics published a report that included questions researchers still want answers to, including: Which microbial communities should we treat as unwanted guests and which do we welcome in? And how do we build living spaces that promote a healthy indoor microbiome?

According to Jessica Green, a professor of biology at the University of Oregon who was part of the committee, the researchers from the National Academies decided that the agenda for the future was “to develop a microbiome-informed built environment that considered both occupant health and energy efficiency. The committee outlined the what, the why and the how of how to make that happen.”

Some microbe species can be harmful, but “far fewer than would have been in your home in 1800 in London,” Rob Dunn adds. “What’s more conspicuous than the harmful species that are present is how many species that we used to be exposed to in our home are now missing. In a way, the homes we’ve created today aren’t marked so much by what’s there as by what’s absent.”

Dunn and his colleagues surveyed the dust in 1,000 houses across North America, and now, in collaboration with Noah Fierer, a professor and researcher at the University of Colorado, they are working on surveying shower heads and sourdough bread.

“A shower head is full of these crazy little biofilms, which are like a house that the microbes build for themselves and others,” Dunn explains. “In those biofilms, we know that sometimes there are species that can cause problems, especially if you’re immunocompromised, which lots of people are now. But then, [there are] also species that look like they’re probably beneficial, that they’re triggering positive immune responses in you.”

“What’s falling on you, into your eyes, into your mouth, is almost definitely affecting you in some way,” he continues, “but we don’t have a very good understanding of what determines which species are in your shower head versus your neighbor’s shower head versus the hotel shower head. So, we have a survey around the world ... to try to figure out what’s in there and what it’s doing.”

Jessica Green says people can carry out “interventions on the indoor environment" through cleaning, managing ventilation and filtration systems, controlling temperature and relative humidity, and through everyday behavior. New research findings also suggest that managing vegetation and landscape architecture outside the home might impact the microbes that people are exposed to inside the home.

“One of the great ironies of all of this is that, in many cases, the healthiest thing you can do in terms of your built environment is basically to make it more like the outside,” Dunn adds. “You open the windows. You increase flow. ... In many ways, the [theory of] sealing up houses tighter and tighter, trying to kill everything and keep it clean, took us pretty far down the wrong road. So, we’re having to pause and think about where we are. Do we need to backtrack? Do we need to totally revisit what’s going on here? So, there’s kind of a moment of reckoning.”