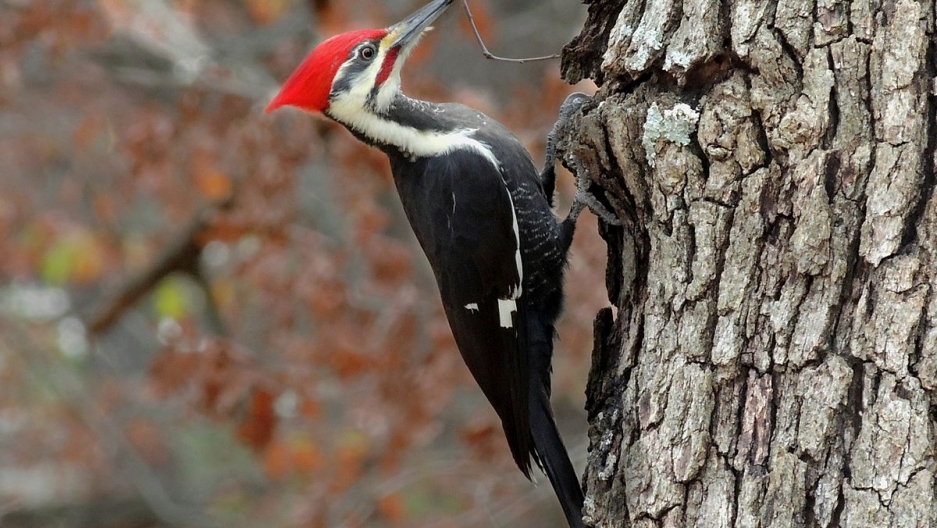 A pileated woodpecker is shown here.

Is the evolution of particular traits predictable or random? Or put it this way: If we rewound the tape on Earth’s history and started life over again from the very beginning, would the same animals — even humans — still emerge?

It’s a question that evolutionary theorists have long pondered — and one that advances in DNA sequencing and evolutionary experimentation have recently opened new doors to understanding. Harvard biologist Jonathan Losos elegantly takes on the debate in his new book, "Improbable Destinies: Fate, Chance, and the Future of Evolution." “Let me give you two examples,” he says.

“On the one hand, think about a dolphin or a shark,” he says. “These are two distantly related animals. One is a mammal, [an] animal with hair like ourselves, the other is a fish — and yet they look really very similar, highly identical: a streamlined body form, a powerful tail for propulsion, flippers for steering and a fin for stability.”

That’s because their shared body shape is ideal for moving quickly through water, he says. “In fact, if engineers were going to design an animal, that's pretty much what they would design,” he adds, pointing out that a submarine’s shape is very similar.

“So, the idea is that there are particular demands that the environment sets for which there are optimal solutions,” he says, “and natural selection repeatedly sculpts those solutions out of different organisms.” This idea is called convergent evolution — when species evolve with similar traits, “often because they’re adapting to the same ecological niche in the same way,” he explains.

(Read an excerpt from "Improbable Destinies: Fate, Chance, and the Future of Evolution.")

But on the other hand, evolving this way is not a given, according to Losos. Take the example of woodpeckers, which tap on trees, listening for the echo of insect tunnels in wood. When they find a sweet spot, they “jackhammer” their way to the tunnel with their bill, he says. Then, “they stick out a long, bristly tongue, so long that the tongue actually wraps around their brain. They stick out their tongue to snag the insect and pull it out, and so that's how they adapt to eating this resource.”

While woodpeckers live on many continents, they don’t live on islands, Losos explains. “And so on islands, other species fill this ecological niche, and they often do it in different ways.”

On the island of Madagascar, for instance, a cat-sized lemur called an aye-aye also eats wood-dwelling grubs. “And it catches them in the same way: It taps the wood looking for hollow sounds, then it digs through the wood and then it extracts the grub,” Losos says.

“But instead of having a long bill and a bristly tongue like the woodpecker, [the aye-aye] has a completely different set of adaptations,” he adds, like a long, skeletal third finger used to tap on the wood, and large ears to listen for the echo of tunnels.

When aye-ayes find grubs, “they then have enormous incisor teeth that are very good at digging through wood, digging down to the tunnel, and then they use that long skeletal finger with a little nail on the end to hook out the grub and pull it out.”

So aye-ayes and woodpeckers have evolved very differently to do the exact same thing: eat grubs out of wood. “I think this is a very common explanation for why evolution is not inevitable, that ... how you evolved in the past makes it easier to evolve one way or another,” Losos says. (In Nature, reviewer Kevin Padian compares this theory to a Monopoly game.)

“Birds don't have teeth,” Losos adds. “They couldn't chew through the wood like the aye-aye. Conversely, the aye-aye doesn't have a bill, so it couldn't do the jackhammering. So, based on their evolutionary heritage, they adapt in different ways to do the same thing. And that's why evolution often leads to different outcomes, even [in] species adapting to the same ecological niche.”

Where does this evolutionary take leave humans? In his book, Losos describes the work of scientists who argue that in Earth’s evolutionary history, humans are more or less inevitable as top predators. “They've argued that the human body form and lifestyle is uniquely adapted to the Earth's environment and that something like us inevitably would have evolved by natural selection,” he says. But considering the reams of evidence gathered in his book, Losos doesn’t agree.

“I think, in fact, that evolution is much more contingent upon what happens [in] Earth's past, that if events had happened differently, they might have sent life down a different course,” he says. “I think it's very unlikely that something like us actually would have evolved if circumstances had been different.”