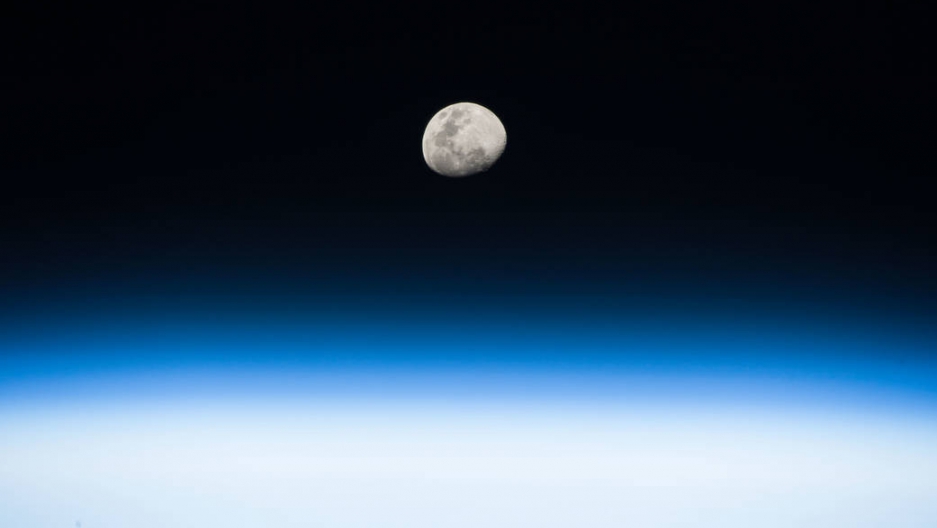 Moonrise from aboard the International Space Station, Aug. 3, 2017, is shown here.

The moon doesn’t have a magnetosphere, unlike Earth. The protective bubble shields our upper atmosphere from solar wind — and, it's what makes compasses point north. But billions of years ago, scientists say, the moon did have its own magnetic field.

In fact, according to new research published in Science Advances, the moon’s magnetic field stuck around for at least 2 billion years — a surprisingly long time given the moon’s size, according to lead author Sonia Tikoo, an assistant professor of planetary sciences at Rutgers University. And as she explains, the findings raise new questions about what powered the dynamo, or generator, for so long, and when the moon’s magnetic field finally fizzled out.

In rocky bodies like the moon, magnetic fields are generated by liquid metal churning in the core — but that churning doesn’t last forever, Tikoo says. “Generally, the convection or the motion of liquid metal within the cores is tied to the cooling of the planet. So, you have hot metal rising within the core and cold metal falling as it cools off closer to the mantle.”

“And so, the idea is that on a smaller planetary body like the moon, the moon might cool off more quickly than say, a larger body like the Earth and that it might run out of energy earlier,” she adds. “And so, perhaps the moon's magnetic field turning off has to do with it running out of the power source.”

To study the moon’s ancient magnetic field, Tikoo and her team turned to the “magnetic record” frozen in lunar rock. “Whenever rocks form, they create minerals within the rocks that are like little compass needles,” she explains, “and these minerals align with whatever ambient magnetic field is around at the time that the rock is forming.”

“So, what we can do is, we can take the rock samples and measure them in a magnetometer and get the direction and intensity of the magnetic field in the rock,” she adds, “and then we can convert that to information about how strong the ancient magnetic field was that magnetized the rock initially.”

In the study, researchers examined just one sample, which was collected during the Apollo 15 mission in 1971. It’s a glassy rock that likely formed when a meteorite crashed into the moon’s surface. “And this glass had these beautiful, small magnetic grains which were excellent magnetic recorders,” Tikoo says, “so, this was the best sample that we could have targeted, basically.”

The rock, which formed 1 billion to 2.5 billion years ago, recorded a magnetic field of roughly 5 microteslas. But 3.56 billion years ago, the moon’s magnetic field averaged around 50 microteslas, a Rutgers press release notes. According to Tikoo, that’s as strong as the Earth’s field is today. “So, we really need to learn more about the decline, what could have caused the decline, and whether that means something about different power sources operating in the moon at different times in its history.”

In the study, the authors suggest the dynamo may have been powered by “at least two distinct mechanisms” over the course of its existence. “The Earth's magnetic field is generally generated by convection in our core, but also it's supplemented by energy released during the crystallization or the solidification of the solid inner core,” Tikoo says. “And so, we think that that process might have also been occurring within the moon.”

Answering those questions could tell us more than just what happened to the moon’s magnetic field — it could give clues about the habitability of other bodies. According to Tikoo, Mars once had a magnetic field — and water. “We think possibly because Mars lost its magnetic field, it lost its shield and the solar wind was able to strip away much of the water from the atmosphere of Mars and leave it barren,” she says.

“Whenever we look at exoplanets or the moons of exoplanets that could be in the habitable zone, we can consider the magnetic field as an important player in habitability,” she added in the press release. “Then the question becomes what size planets and moons should we be considering as possibly habitable worlds.”

But to understand what happened to the moon’s magnetic field, Tikoo needs to analyze more moon rocks. “I would absolutely love it if we collected more rocks from the moon,” she says. “All the Apollo missions collected rocks from a relatively limited set of regions on the near side of the moon that faces us, close to the equator, and there's a lot of rocks that are missing.”

“In order to really learn about the moon's history, we have to fill in a lot of these gaps — both in terms of rock types as well as rock ages.”