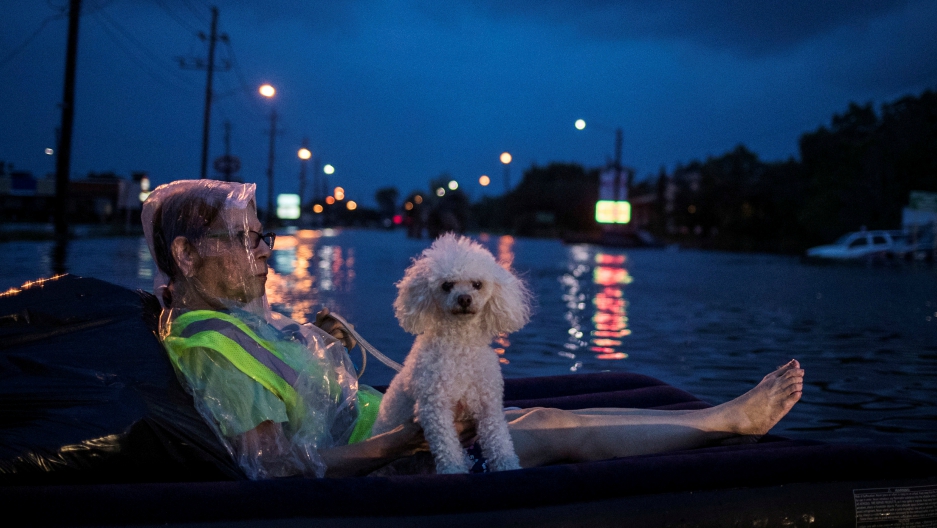 An elderly woman and her poodle use an air mattress to float above flood waters from Tropical Storm Harvey while waiting to be rescued from Scarsdale Boulevard in Houston, Texas.

The fresh hit comes five days after Harvey slammed onshore as a Category 4 hurricane, pummeling the US Gulf Coast with torrential rains that turned neighborhoods into lakes in America's fourth-largest city, Houston.

As rescue missions and relief efforts continue, some are raising questions about whether Houston could have done more to prepare for the flooding that’s driven tens of thousands out of their homes.

“I don't think there's any city in the world ... that could have dealt with 51 or 52 inches of rain in a matter of 70 to 80 hours,” says Dale Morris, a senior economist at the Netherlands’ Embassy in Washington, DC, and director of the Dutch government’s water management efforts in the US. “With those volumes of rain, there would there would be flooding no matter.”

But Morris says Houston could learn some lessons from the Netherlands, a country considered a global leader in flood-management design and initiatives.

“Some of the issues … that Houston is confronting now, the Dutch have confronted too,” Morris says.

As part of his role directing water management efforts in the US, Morris has already been in touch with officials in Houston and other areas of Texas.

“They need to be prepared for coastal surge and surge protection,” Morris says. “This is the third major flood in Houston in the last three years ... so this condition is sort of becoming the new normal.”

What does Morris recommend?

“You need to zone better … to make sure people don't live in the flood plains or, if they do, that they have houses that are elevated and can withstand floods.”

“You need to make sure that there are storage areas where you can store … these massive amounts of rainfall, where you can add additional pump capacity to help drain the land where that is. … You need to create green spaces so that the water that falls … can be absorbed as groundwater, as opposed to running off down concrete or asphalt paved streets. … The initial reaction is always to fight the water, to channel it away, to stop it from coming in. ... You have to actually create a more resilient system so that the ground — the grass and your natural environment — become the place where water naturally gets stored, as opposed to having it again channeled on concrete paved streets where it can drain anywhere and thus you get backup flooding.”

He says this approach would require a “change in mentality” and financial commitment, but that Houston and other coastal cities can’t afford not to take action.

“The rest of the US depends upon Houston for its petrochemical output” among other things, Morris says. “I think asking whether it's worth spending $20 billion or $30 billion to protect a multi-hundred-billion dollar city — that's an easy answer to that question.”