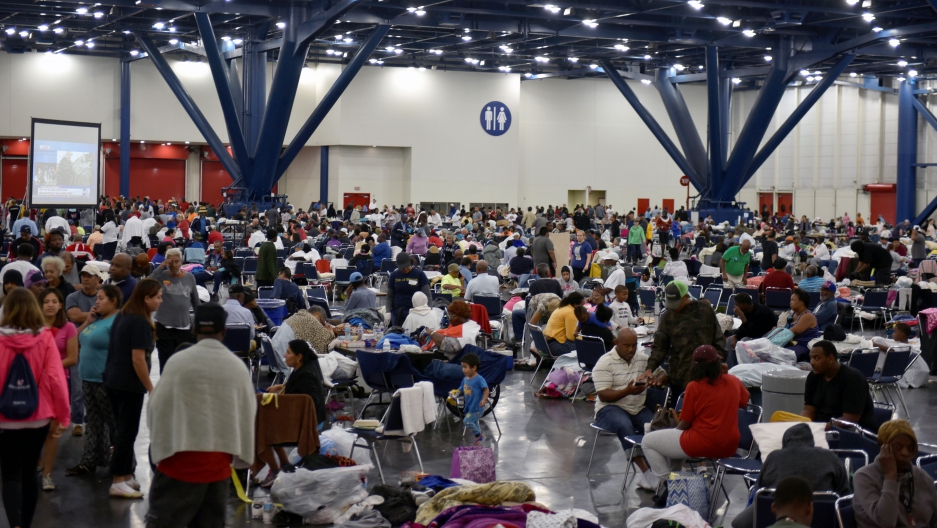 Evacuees crowd an exhibition hall at the George R. Brown Convention Center in Houston, on Aug. 29, 2017, as Tropical Storm Harvey continues to flood parts of the city. Officials have said they will not check immigration status at locations where people are seeking shelter.

In Texas, thousands of people are taking shelter as floodwaters continue to rise.

But one group might not be taking advantage of emergency services: undocumented immigrants.

Tropical Storm Harvey is pummeling the Gulf Coast just days before a controversial new immigration law is scheduled to go into effect. Senate Bill 4 allows local law enforcement to ask for proof of legal residency at any routine detention, like a traffic stop. It would also threaten police chiefs and sheriffs with jail time if they don't help federal immigration officials.

The looming crackdown on illegal immigration is preventing some people from seeking help at shelters, out of fear that government officials there will ask to see their papers.

Oscar Hernandez, a community organizer with United We Dream Houston, told The Washington Post that undocumented immigrants were afraid to go to shelters and were staying with neighbors instead. "All of us are scared," he said.

What's happening in Texas is part of a larger national debate about how local and state law enforcement policies can affect public safety. SB4 is the first state law seeking to penalize sanctuary cities, but many other similar pieces of legislation are moving through states around the country.

On the other hand, the governor of Illinois signed the Trust Act Monday. The law prevents state and local police from detaining people on the basis of their immigration status and from complying with immigration officers’ requests to detain people. Some people say the Illinois law creates a "sanctuary state,” though many supporters reject that label. The law would ensure good communication with the federal government on immigration, not keep law enforcement agencies apart, Illinois Gov. Bruce Rauner says.

“Illinois has been welcoming of immigrants for a long time, and this bill will continue that tradition,” Rauner said during the signing ceremony. “It also makes clear that stopping violent crime will be law enforcement’s mission rather than working on federal prerogatives that a federal court has found illegal.”

Sanctuary is hard to define and policies vary from place to place, but it generally means that the local law enforcement do not cooperate with federal immigration officials in some way. In some cases, cities refuse to comply with “detainer requests,” in which Immigration and Customs Enforcement asks that local jails hold people up to 48 hours after they are set to be released.

At the beginning of the Trump administration, counties with these kinds of sanctuary policies spanned 30 states and represented 92 percent of the American population. But since January, President Donald Trump and Attorney General Jeff Sessions have been at war with these places, threatening to withhold federal funds from cities that do not comply with federal immigration enforcement directives.

"I think the undeniable trend is that urban centers in the United States have been thrust into the middle of the immigration law enforcement debate," says César Cuauhtémoc García Hernández, an immigration law professor at the University of Denver. "All of these policies take slightly different approaches. That makes a whole lot of sense because these are different communities. They’re responding to different needs and different pressure points."

In March, PRI mapped sanctuary counties around the country, using data compiled by researcher Tom Wong and the Center for American Progress.

Some cities have instead embraced the label “welcoming city.” The term generally includes a statement of inclusiveness but many who have used it still comply with immigration detainers. Below are some, but not all cities that have used this label:

Hernández says using welcoming instead of sanctuary could dilute the power of legislation.

"By so steadfastly trying to avoid the label of sanctuary, some city officials are inadvertently subverting the messaging power of their actions," Hernández says. "Declaring oneself to be sanctuary suggests a willingness to stand with immigrants, no matter what the forces that ICE sends into the community might look like."

Meanwhile, in Texas, authorities are trying to reassure undocumented immigrants that it is safe to seek help from the storm. On Monday, Houston Mayor Sylvester Turner, who is also an attorney, stressed that the city's immigrant community should seek government help. “There is absolutely no reason why anyone should not call. And I and others will be the first ones to stand up with you. If someone comes and they require help and then for some reason, then somebody tries to deport them, I will represent them myself,” he said during a news conference. He urged Texans to put the SB4 “law on the shelf” as rescue efforts in Houston continue.

“I don’t care who you are; I don’t care what your status is. I do not want you to run the risk of losing your life or [that of] a family member because you’re concerned about SB4 or anything else,” he said.

US Immigration and Customs Enforcement and Customs and Border Protection released a statement on Friday that said, “Routine non-criminal immigration enforcement operations will not be conducted at evacuation sites, or assistance centers such as shelters or food banks.”

But Texas Tribune reporter Julián Aguilar told PRI's The World that immigrants are still on tenterhooks about what will happen to them in the storm and about the outcome of SB4. The law is supposed to go into effect on Friday, but it could get blocked by the courts. It is currently before a federal judge in a lawsuit brought by Houston, Dallas, San Antonio and Austin to challenge the constitutionality of the legislation.

"So everybody's either waiting for 12:01 a.m. on Friday to see if this goes into effect," Aguilar says, "or for Judge Orlando Garcia to temporarily stop the law while it plays out in the courts."

And that could help bring a lot more clarity to what states and localities can and cannot do.

"I think anytime that you have a major piece of legislation that’s being challenged on a constitutional basis, it’s an opportunity for the courts to clarify the powers that legislatures have to enact sweeping legislation," says Hernández. "We don’t even have the first opinion of what will surely be many opinions to begin to slice and dice and we make our way to the Supreme Court."