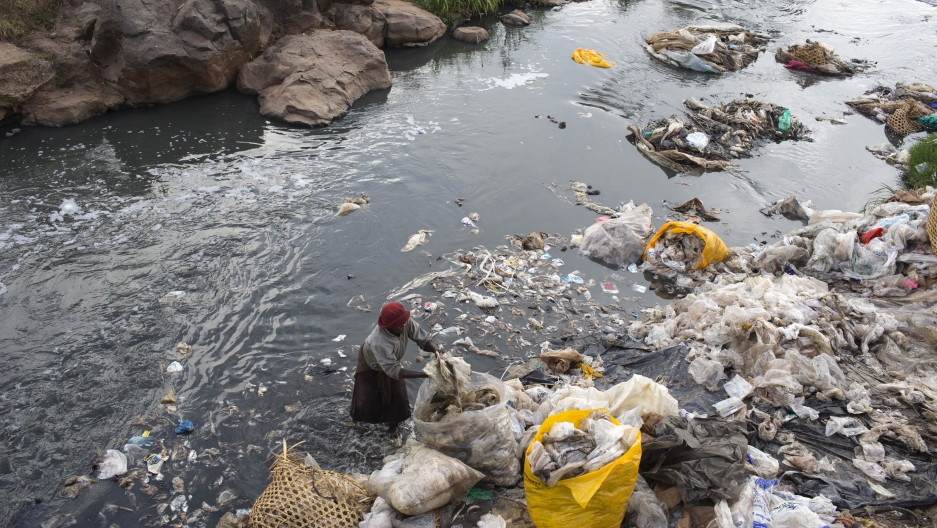 A woman recycles plastic bags from a river near the Dondora dumpsite close to the slum of Korogocho in the capital Nairobi, Kenya, March 17, 2015.

Discarded plastic bags are a scourge in many places across the globe. But the situation is particularly bad in Kenya. Plastic bags hang from trees and clog waterways. And in Kibera, a slum on the edge of Nairobi, there are entire hills made of them.

But now, the Kenyan government has said "no more." Starting Monday, plastic bags are illegal in Kenya. And anyone found manufacturing, selling or even using them could be charged up to $38,000 and spend up to four years in jail.

Critics of the new ban say it will probably fail this time as well. The population is far too dependent on plastic bags and they lack a viable alternative, writes Leah Oyake-Ombis, a researcher at the University of Nairobi, in The Conversation:

"Plastic bags also have an extremely important role in the average person’s daily life as they stand out for their excellent fitness for use, resource efficiency and low price. For Kenya, where 56 percent of the population live on less than a dollar per day, plastic bags support the “kidogo” economy — synonymous with the majority. This economy is based on the small amounts people buy — for example one cup of cooking oil, or a handful of washing powder or squeeze of toothpaste. To take these home they need the small plastic bags."

Instead of banning bags, Oyake-Ombis believes Kenya should focus on plastic recovery and recycling.

But environmental activist Wanjira Mathai tells The World that a plastic bag-free future in Kenya is possible.

"We've seen this happen in our neighboring countries, in Rwanda and Tanzania. And many of us marvel at the beauty and cleanliness of a city like Kigali," Mathai says. "So why not in Nairobi?"

Hear more from Wanjira Mathai by listening to her interview with PRI's The World, above.